I'm not going to pay €58.- for a modern reprint (lol) but does anybody know/have any more picture of these? Made for the guards during the orient travel of the royal couple in 1898. Did any survive (helmets, that is)?
I like how the cape is made to fit over the helmet This rather nice picture appeared in the April/May/June 1936 edition of the Zeitschrift für Heeres- und Uniformkunde. It shows a Vizewachtmeister of the 1. Zug and a Gefreiter of the 2. Zug of the Leibgendarmerie who were attached to the personal staff of Generalfeldmarschall Graf v. Waldersee in China in 1900. They wore the same uniform as the personnel on the Palestine trip of 1898.

Great photos, thanks for sharing them! I'm very interested in these Palestine khaki uniforms and those are two of the best photos I've seen. ...including this one of the Kaiser and an officer (any idea who that is?). Note the Leibgendarmerie behind the Kaiser with the Guard star on their helmets as seen in the two photos you chaps posted.

Any of these helmets survive? Yes... there's one from the 1. Zug photographed in "Tropenhelme der kaiserliche Marine, der Ostasiatischen Truppen und der Schutztruppen" by Ulrich Schiers
(Published by the Deutsche Gesellschaft für Heereskunde).

Looking forward to more this topic...

... and this colour postcard of Leibgendarmerie uniforms including the tropical uniform-

That could be von Bulow with the Kaiser.
It must be a Bavarian. They always smell the worst!
Top

Great pictures! I don't have that source, does it tell what color are the fittings (silver/gilt)? The spike looks yellow on the color card. Were the neck flaps made to detach? Despite the close-up picture I am not sure weather the neck flaps are attached to the band (and just looped over the helmet), of if this is the standard band permanently affixed to such helmets and the neck flap is attached otherwise.
Top

Spike is yellow metal, guard star white metal, as on the Leibgendarmerie currassier helmets. plain spike on the other ranks helmet in the book, presumably fluted for officers?

Band around the helmet is in platoon colours: blue 1.Zug, red 2.Zug (notice in the first photo its a mixture of troops from the 1st and 2nd... the blue of the 1st looking noticably lighter than the red of the 2nd, same on collars and cuffs... and side caps, chap on the left is 1st Zug, chap on right is 2nd).

Neckshade is detachable, looks the same as the later Bortfeldt helmets which had a neckshade attahed with hook and eye-

Thanks for the von Bulow tip, Badener!

Anyone want to guess at the Vizewachtmeister in Glenn's photos medals? I reckon it might be an 1897 Wilhelm I centenary medal in first position with the yellow ribbon looking dark, but what's the second cross? He's also got a long service ribbon on his pocket. 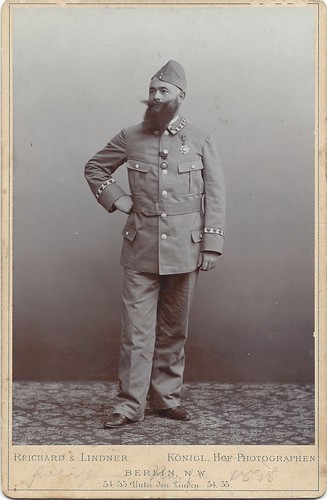 ps3151 by joerookery, on Flickr
Last edited by joerookery on Thu Oct 25, 2012 5:24 pm, edited 1 time in total.
VR/Joe
www.pickelhauben.net
The British philosopher and historian R.G. Colligwood said, "it is not
the facts that are interesting in history, but the questions and their
answers - and these can never be fixed.
Top

My goodness you are right again! This is from Chris's website: http://s400910952.websitehome.co.uk/ger ... estine.htm" onclick="window.open(this.href);return false;

Imperial Footmen
I have so far found very little information on the footmen of the imperial entourage. What I have written here is based only on observation of several period photographs and one colour illustration of their home uniform (printed in "The Kaiser's Warlords" by R Pawly and P Courcelle, Osprey Elite 97).

The collar and plain turn-back cuffs of the khaki tunic were black for officers and senior NCOs and khaki for junior NCOs and other ranks, both were edged in the same lace as worn on their home uniforms. This lace was white edged in red and back and had black Prussian eagles along its length. They wore no shoulder straps. Some photographs show footmen with plain khaki trousers or riding breeches, and some show a broad white stripe on the outside seem.

Their tropical helmets appear to have been from a different manufacturer to the helmets worn by the staff and Leibgendarmerie. They may have been bought from several different sources. Some appear rounder than the Leibgendarmerie helmets, some appear similar to British army helmets of the period (see photographs below). The tropical helmets of the footmen had no spike or eagle on the front, but from period photographs it appears that some members had a small cockade at the front to replace the two on the sides worn by the Leibgendarmerie and general officers. Officers had yellow metallic cords around the hatband of the tropical helmet. The side cap appears in period photographs to have been plain khaki without cockades.
VR/Joe
www.pickelhauben.net
The British philosopher and historian R.G. Colligwood said, "it is not
the facts that are interesting in history, but the questions and their
answers - and these can never be fixed.
Top

I am going to tentatively identify this guy as Kammerdiener (mit dem Titel Büchsenspanner)Joseph Rollfing (1856-1920). He, along with Kammerdiener Wilhelm Schulze accompanied the Kaiser on the 1898 Palestine trip. However only Büchsenspanner Rollfing had a Turkish Medjidie Order (5th Class). Interestingly neither Herr Rollfing or Schulze paid to have their Jerusalem Crosses listed in the 1908/1909 Orders Almanach.

Amazing as usual Glenn!
VR/Joe
www.pickelhauben.net
The British philosopher and historian R.G. Colligwood said, "it is not
the facts that are interesting in history, but the questions and their
answers - and these can never be fixed.
Top

I did some digging and found the composition of the Palestine trip of 1908. The Hauptquartier including the Leibgendarmerie was composed as follows:

The male court servants were:

That's great Glenn, thanks as always for that info!

So, who are the two who accompanied Waldersee in China?

Not known at this time! Having said that, I have not looked yet. It may be a bit tricky but there are a couple of possibilities to look into.