Any clue on this uniform?

Any clue on this uniform?

Hi,
I have two pictures of the same person. The first picture taken in Dresden shows a soldier with a M15 Feldbluse (after September 1915) and a Tschako with an "Adler".

My questions are:
- are my above assumptions correct
- any clue of the regiment as on the first picture; I was told Tschakos were worn by Telegrafen, Jäger, Luftschiffer, Fliegertruppen and MG-Abtl.
- was it later absorbed in the Kgl. Sächs. Telegraphen-Bataillon Nr.7 (Dresden)
- is it at all likely that this soldier could have changed regiments during the war

Thank you for your help. Kind regards

It appears that he is also wearing Telegraphen trappings in the first photo. The shoulder straps appear to have the light gray color of the Verkehrstruppen and he is wearing the ammo pouch pattern normally worn by them.

I don't have a clue why he would be wearing a Prussian style shako, unless it is just a Atelier prop.

What I'm I missing here? That should be a Prussian telegraph is there something I'm not thinking about?
VR/Joe
www.pickelhauben.net
The British philosopher and historian R.G. Colligwood said, "it is not
the facts that are interesting in history, but the questions and their
answers - and these can never be fixed.
Top

Thank you for your answers. If I understand this correctly:

- the first picture shows a uniform from a Telegraphen unit (because of the light gray color shoulder strap and the ammo pouch), and the Adler on the shako points to a Preussia unit (in which case which battalion?)

Can we conclude that this soldier changed units between the 2 pictures?

Thank you for your help.

The gentleman on the pictures acquired the Baden citizenship in 1901 while working and residing in Karlsruhe. He moved to Leipzig in 1908 and applied for the Sachsen citizenship in 1912. Hence the second picture taken in 1918 (he was 43 years of age at that time) with a Kgl. Sächs. Telegraphen-Bataillon Nr.7 (Dresden) XII Armee Korps uniform.

Would it be possible that the first picture was taken while he still had the Baden citizenship (i.e. before 1912) and he is wearing a Telegraphen-Bataillon Nr.4 (Karlsruhe-Freiburg) XIV Armee Korps uniform (which has a silver line eagle on the Tschako)? But then, why take a picture at a Dresden photo studio (and this speculation seems to be in conflict anyway with the M15 Bluse he wears, which, I understand, was introduced after 1915)?

Am I making progress or do I err into deeper confusion?

Thank you for your help.
Roland
Top

I really doubt it. The shako is filz. that would date this picture at 1914 or later. I think it is most probable that he is in some sort of training status in Dresden. If I was to guess I would say reserve telegraph Battalion seven. There is no proof of this however, in other contingents the "good" Wappens went to the active formation first. especially in 1914 they used anything they could get their hands on. Here is an example of a reserve unit from a different contingent albeit RJB14. 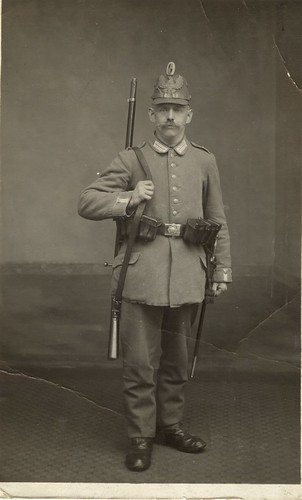 another fly in the ointment is that the Saxons were particularly reluctant to use a Prussian wappen.
VR/Joe
www.pickelhauben.net
The British philosopher and historian R.G. Colligwood said, "it is not
the facts that are interesting in history, but the questions and their
answers - and these can never be fixed.
Top
Post Reply
7 posts • Page 1 of 1