This is a recent found in a north german house. Quite uncommon to find a Württemberg helmet in this area...But the story of wearer will explain it all. 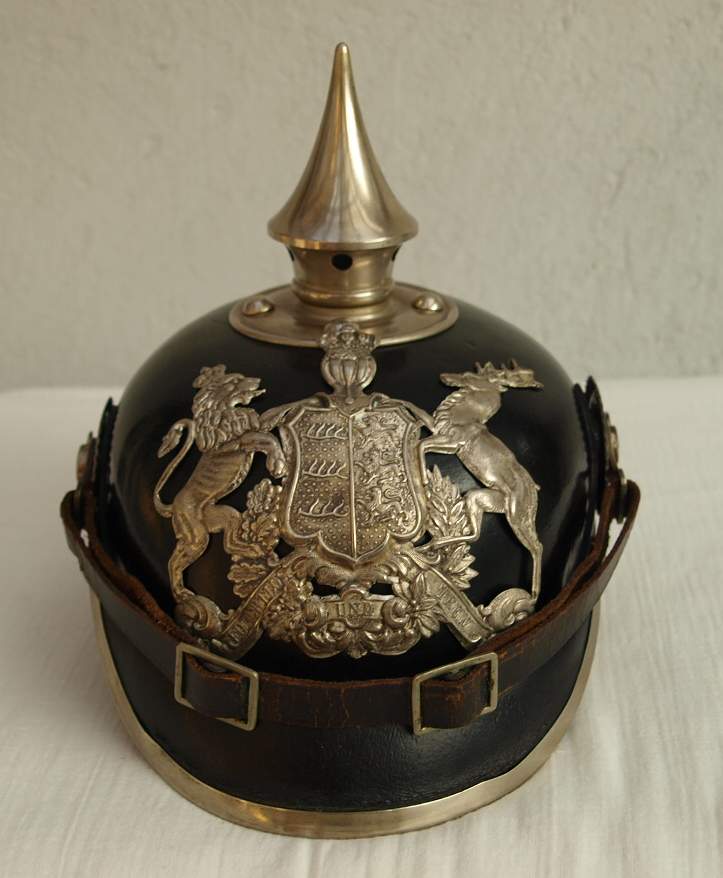 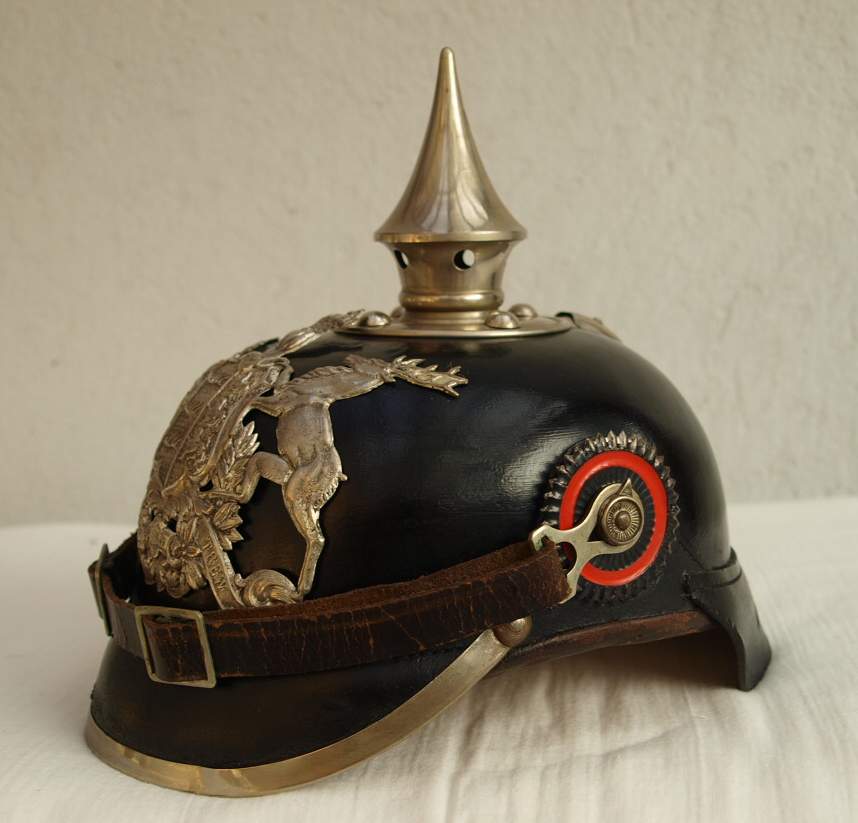 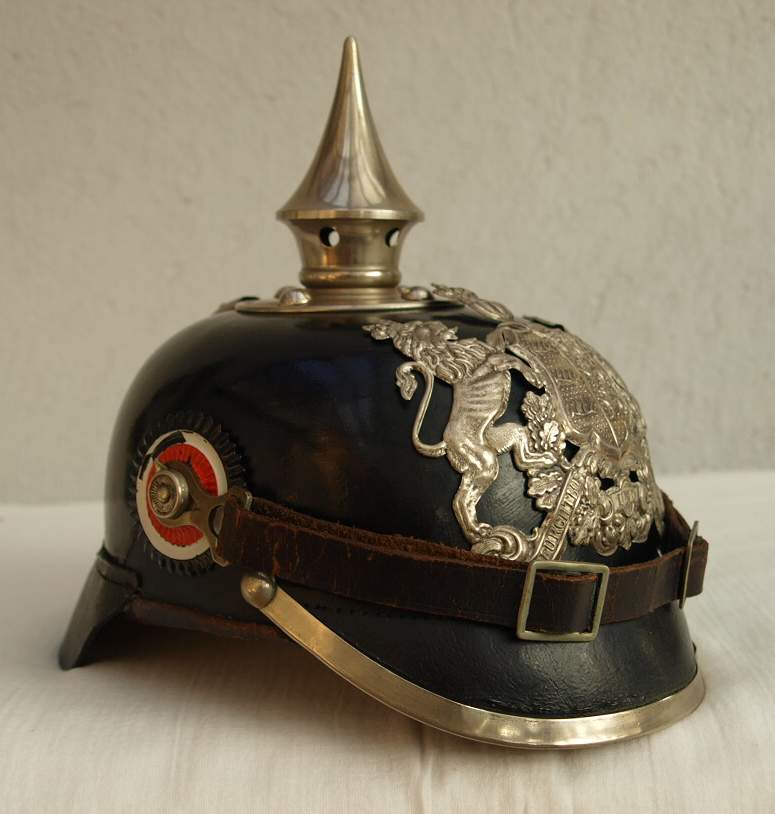 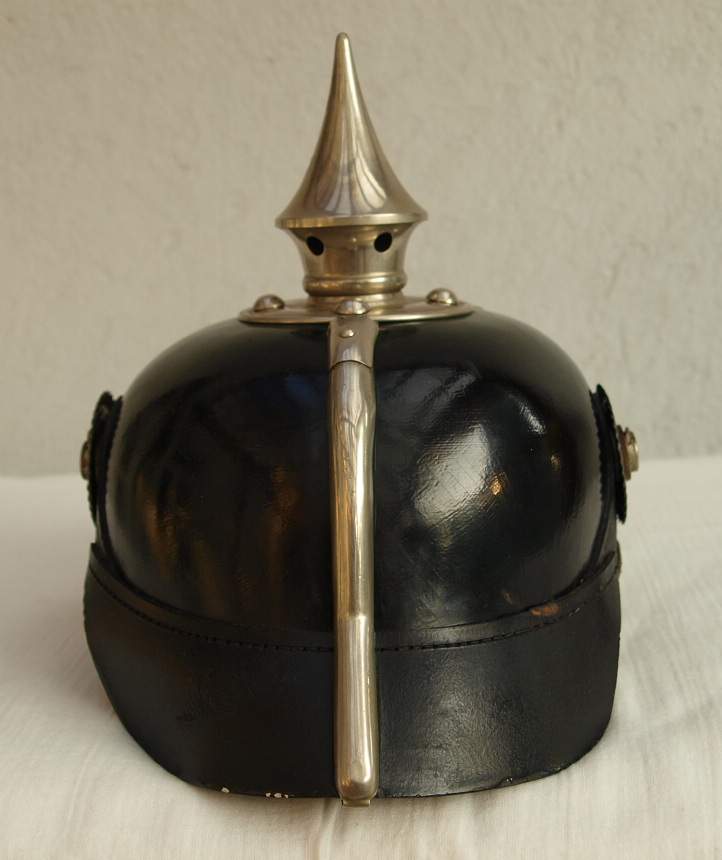 The liner has a "well worn" appearance: 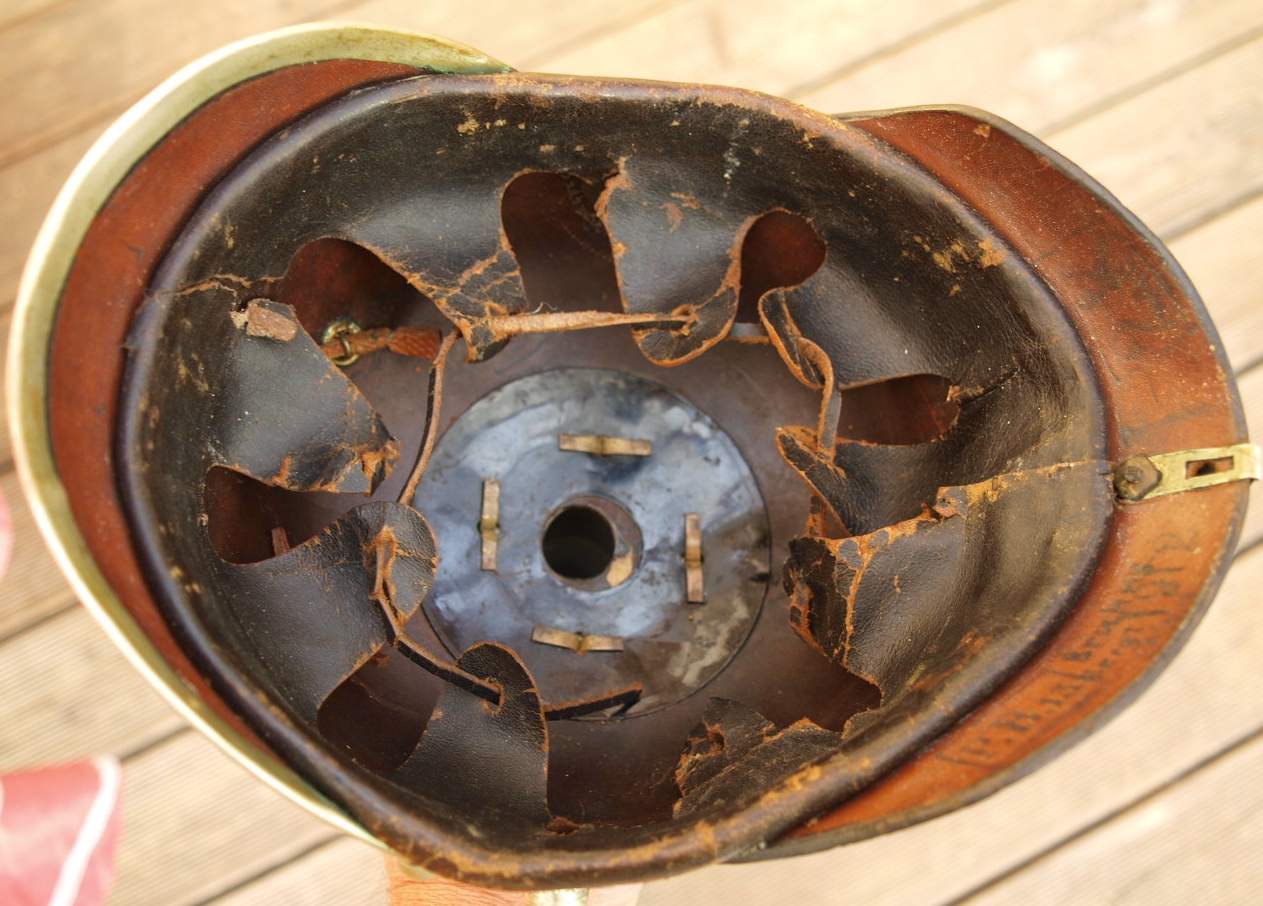 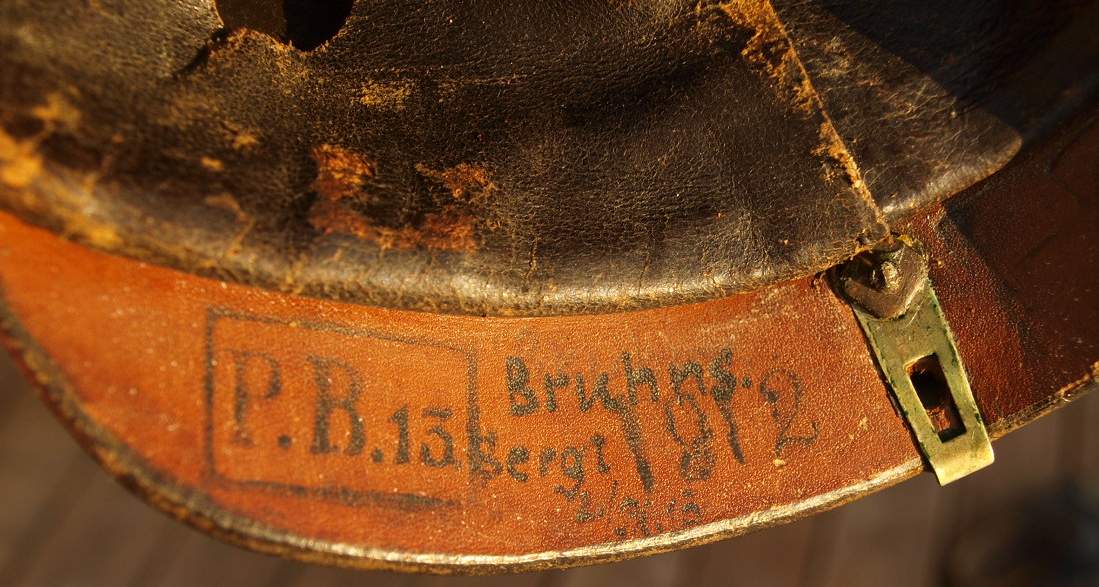 Other side of rear visor is showing the mark 2K, matching with the handwritten on the left side. 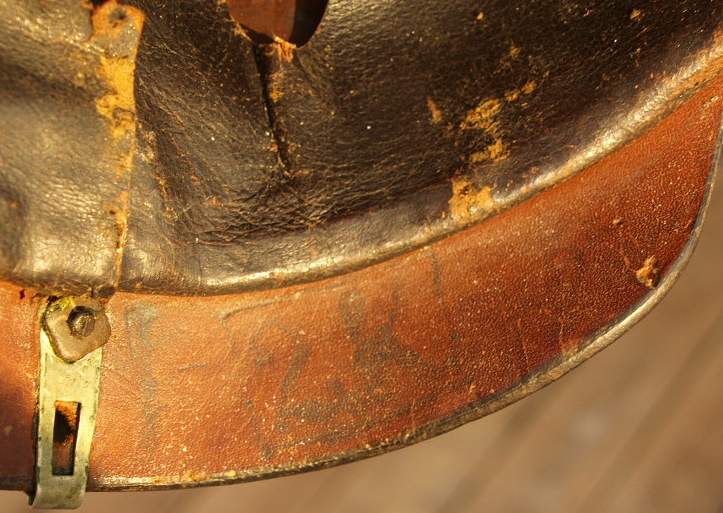 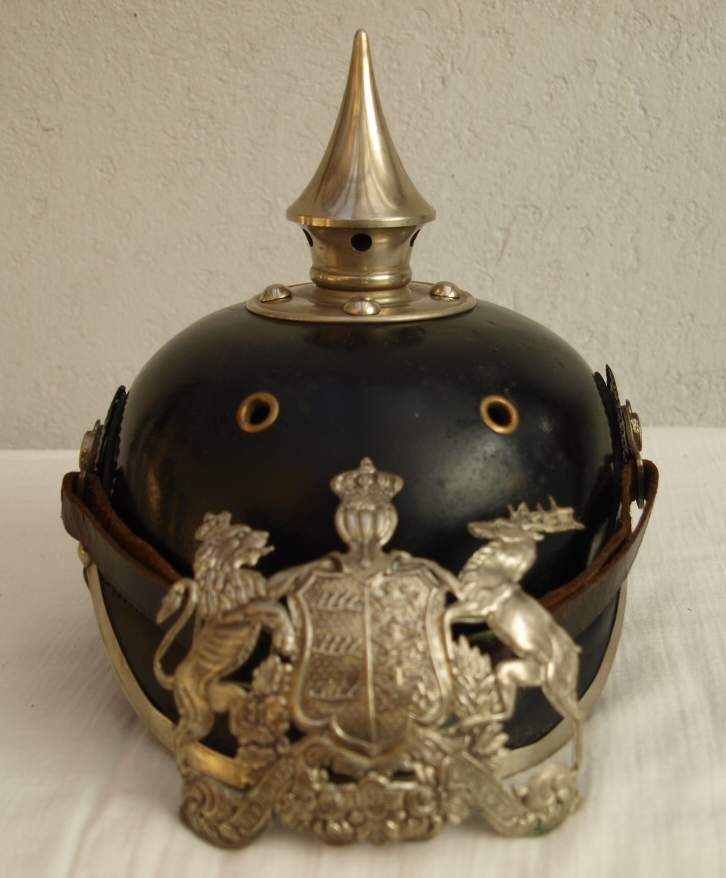 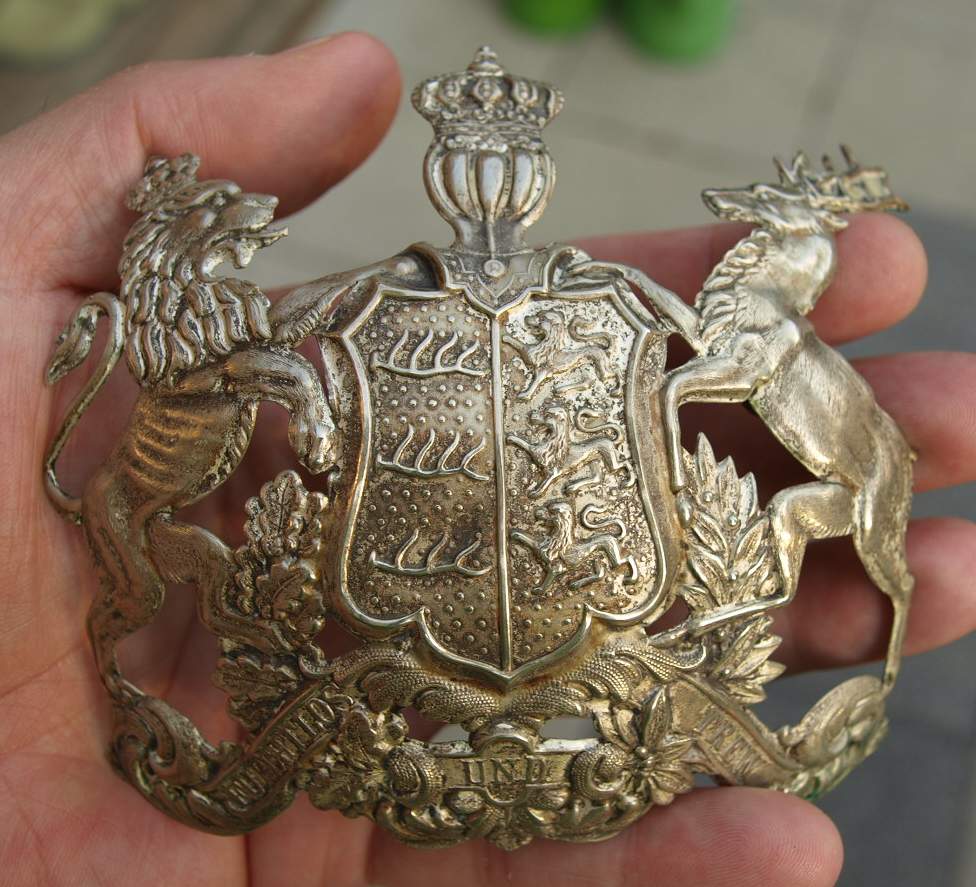 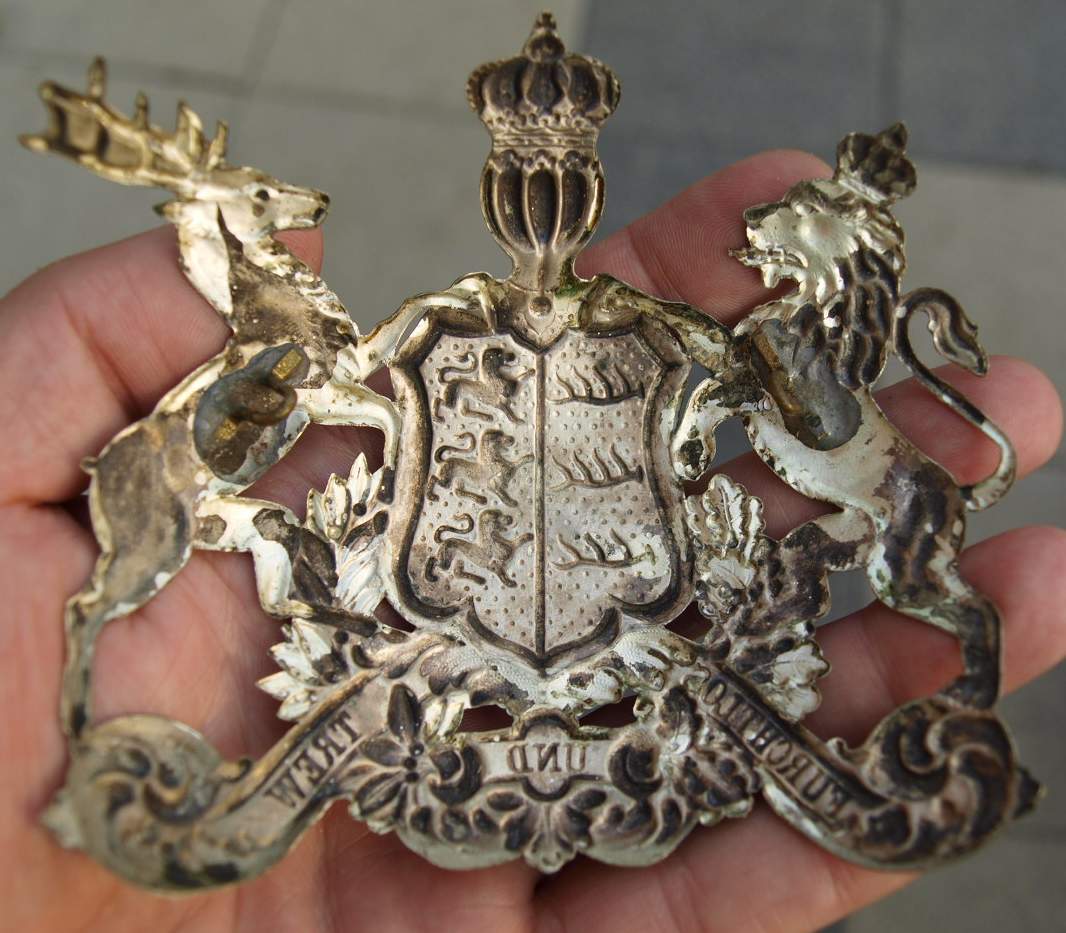 The name "BRUHNS" is not a south german name but is very typical in North Germany (Hambourg, Lübeck, Schleswig-Holstein and also Mecklenburg).
As the Friedens and Kriegsstammrollen from the Württemberg Kingdom were not destroyed during WWII, it was not so difficult to track this guy.

First in the Friedensstammrollen, before the war:

Adolf BRUHNS, born on the 19.3.1889 in Rensefeld, Herzogtum Lübeck. He was electric technician before he decided to go to the army. He had no wife and no children. His father was carpenter.
Adolf BRUHNS was 1,63m tall, a little corpulent. His mouth, nose and chin were unbowed. Hair was blond and Adolf wore a moustache. The size of his boots was 29/4.

On the 1.10.1912, he moved finally as a Kapitulant (Feldwebel formation) to the 2 Company of the Württemberg PB13 and was promoted to Sergeant on the 7.4.1914. This was the moment he marked his helmet.
In the year 1913, he had to stay a few time in a Lazarett because of eczema.
Adolf BRUHNS was familiar with the Gewehr 88 and 98 training as with the Feldtelegraph, the heliograph and the communication through light and banner signals (Winker). He was able to ride a bicycle and to swimm. He also was "Festungspionier" (Fortress-pioneer).

Here are his results of his kapitulant exam, just before the war as the latest Kapitulant of the PB13 (in German language, mathematics, geography and history).

Here is his Kriegsstammrollen with the number 3. He is now Feldwebel: 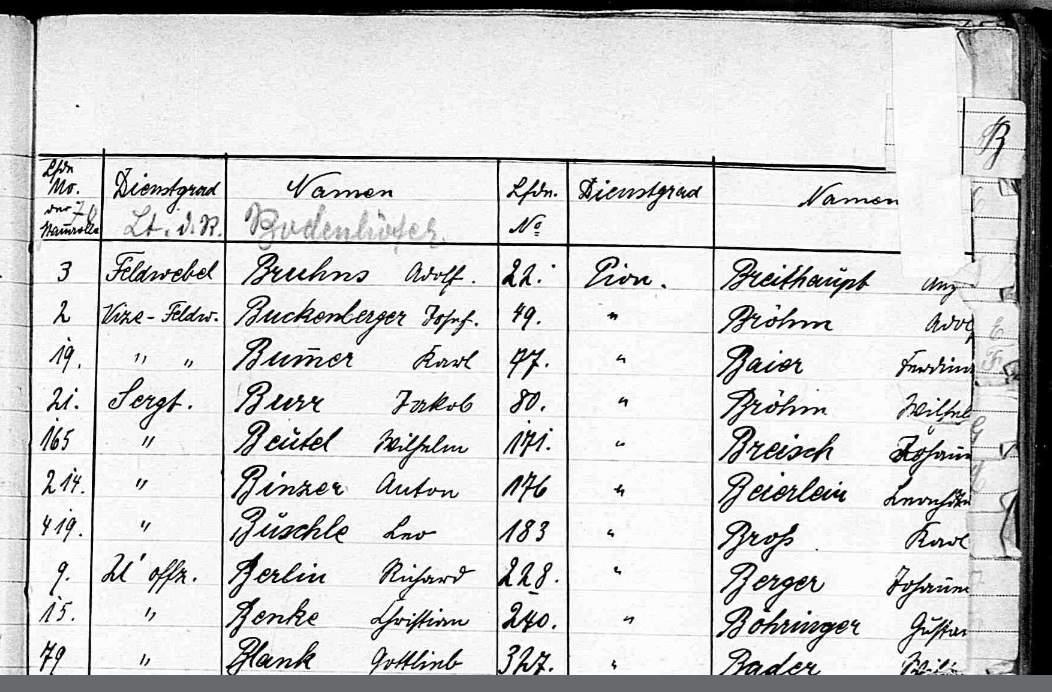 And here the part of the Kriegsstammrollen showing his activity during WWI:

He was mobilised in the 2 Feldkompanie of the PB13
He fought at Bleid, Barancy, Tellencourt and Petit-Failly between the 22 and the 25.8.1914.
On the 27.8.14, he was sent to a Lazarett because of pain in his legs and feet. After the hospital, he moved to the 3 Ersatz-Kompanie and later on the 10.3.15 to the 5 Ersatz-Kompanie of the Ersatz Bataillon of the PB13.

On the 1.9.1915, he comes to the frontline again in the 2/PB13. Adolf BRUHNS is now Feldwebel and the PB13 is now fighting in the Argonne forest.
As BRUHNS was in the Ersatz-Bataillon, he could achieve his formation to Feldwebel:
12.9.14: Überzähliger Vizefeldwebel
7.11.14: Etatmäßiger Vizefeldwebel
10.3.15: Feldwebel

On the 6.1.1916, the 2/PB13 was sent to Flandern near Tenbrielen.. But Adolf BRUHNS is sick again. He caught a very bad infection, a chronical catarrh (gastroenteritis) in the Argonne forest. On the 7.1.1916, it was officially decided that he is front unable. On the 28.6.1916, he was then sent to the Ersatz Bataillon of PB13 in Ulm till the end of the war. He may have helped there by the formation of new recruits.

After the war, he went probably home to Lübeck in North Germany with his helmet which was forgotten there. 100 years later, it was discovered again and found the way to me....

Excellent! Thanks for sharing!
Top

A great addition to your collection. Its a great representation of why we collect.
It must be a Bavarian. They always smell the worst!
Top

Great helmet and to be able to follow his career is wonderful. But (long pause) --- wouldn't he acquired a better helmet, befitting his grade on becoming a senior NCO? Or at least placed NCO cockades on this helmet? Maybe, he retained his helmet as a fatigue piece and had a better one for formal duties. If so where is the other helmet?
fezzes frigidus es
Top

I really like that helmet .Years ago I had one Kammer to the G R 123 . I wish
that I still had it .It is around somewhere.
A real good one for you!
Steve McFarland
Top

aicusv wrote: ↑
Thu Nov 01, 2018 1:47 pm
But (long pause) --- wouldn't he acquired a better helmet, befitting his grade on becoming a senior NCO? Or at least placed NCO cockades on this helmet? Maybe, he retained his helmet as a fatigue piece and had a better one for formal duties. If so where is the other helmet?

I know several other EM named and tracked helmets worn by senior NCO during the war, in the collection of friends and in my own one. They all promoted to Vizefeldwebel or Feldwebel in wartime, but none of them has never replaced the EM cockades through those specifics NCO cokades on its helmet. It seems it was not common anymore at this time, as the Überzug masked all the helmet. The distinction of this rank was quicker and easier to check in the field, just looking at the uniform specific details for this rank (sleeves and collar). Further, I don´t think, that low Unteroffizier ranks that promoted to Feldwebel or Vizefeldwebel during the war had the luxury to buy an Eigentum-Helm...That was peace time luxury.....

I took the picture of the marking for the list. Let me know if this is a problem.
VR/Joe
www.pickelhauben.net
The British philosopher and historian R.G. Colligwood said, "it is not
the facts that are interesting in history, but the questions and their
answers - and these can never be fixed.
Top

Great helmet with an impressive history.

Great helmet with an impressive history.

Joe, you are always free to do that with my helmets, without asking