I share with you my favorite regiment: Thüringisches Infanterie-Regiment Nr.95....

I thus urge you through this column(section) to exchange and to share about the rooms(parts,plays) of the I.R 95

The photos of your rooms(parts,plays) are expected to put in honor of this regiment

It will allow to establish(constitute) an interesting database and a good study for every amateur or expert.

I inaugurate the series of photos with the this whole IR95 Great collrction! Thanks for sharing.

Can I copy your picture of the mark and put it on this list? http://pickelhauben.net/articles/Kammer_Marks.html" onclick="window.open(this.href);return false;
It is far better than the picture that we have. On the right-hand side it seems as though this helmet was reissued to a reserve infantry Regiment but I cannot see the number. Can you? Sometimes if you just wet the end of your finger and rub it across the mark it will jump out at you. Sometimes not. 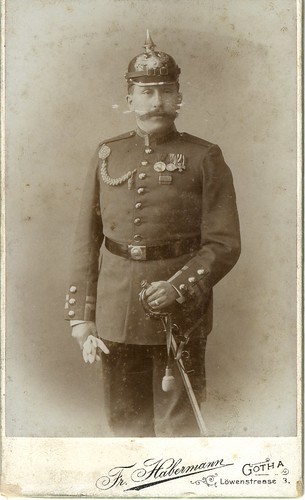 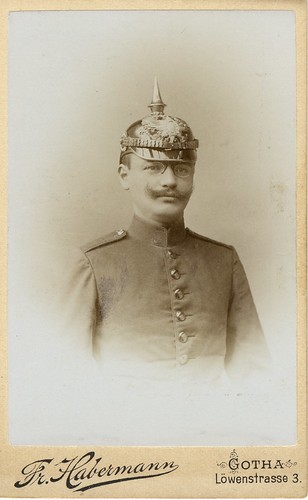 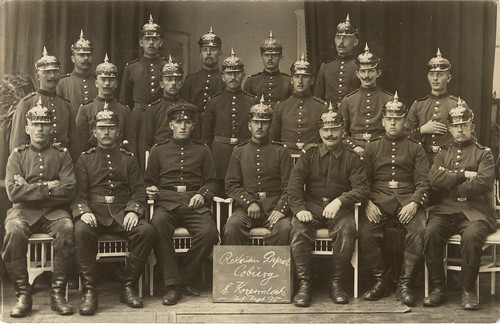 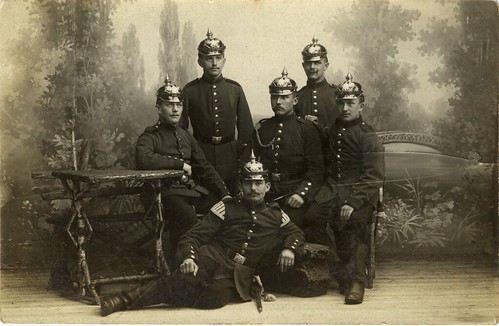 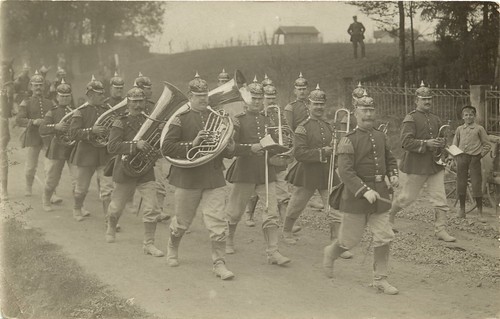 ps669 by joerookery, on Flickr
VR/Joe
www.pickelhauben.net
The British philosopher and historian R.G. Colligwood said, "it is not
the facts that are interesting in history, but the questions and their
answers - and these can never be fixed.
Top

Very nice! And nice photos all.

Not JR 95 but the exact same helmet.

Excellent IR 95 grouping! Since you like IR95 so much, here is a picture of a few haubes I have...

PS Did you know that the first Belgian King Leopold I (in 1830) came from Sachsen Coburg Gotha?
Top

Excellent helmets, fotos and shoulder straps. I will post a pic of my JR95 OR's helme soon.
Remember, Pillage first THEN Burn ...
Top

Hello
Thank you for your comments and you photos.

It makes me happy to see other headsets IR95...

Joe, there is no problem and I authorize you to take my photos for the table. It is with pleasure that I contribute to your post... For Alder...: Why I love this regiment? This is its great European monarchical history:

It all starts with Victoria of Anglettere, daughter of Marie-Louise-Victoria of Saxe-Coburg-Saalfeld, who married his cousin: prince Albert of Saxe - Cobourg - Gotha on 10 February 1840.

Victoria was the last sovereign of the House of Hanover which reigned over the British Isles and their dependencies since 1714, while the electorate of Hanover was passed to another branch of the House of Hanover because different inheritance law. After his death, the British Crown passed to the House of Saxe-Coburg-Gotha (British name of the House of Wettin) represented by his son Édouard VII and her grandson George V. The latter, under pressure from public opinion, changed his name considered too German in world war I period, in Windsor (1917). This House was extended by his son Edouard VII, his grandson Georges V, his great-grandsons Édouard VIII and Georges VI and its great, the current Queen Élisabeth II.

In 2004, the European monarchs and former monarchs descended from Victoria are: Queen Élisabeth II of the United Kingdom and King Harald V of Norway, King Charles XVI Gustave of Sweden, Queen Marguerite II of Denmark, King Juan-Carlos I of Spain, King Constantine II of the Hellenes (deposed) and the Ier Michel King of Romania (deposed). The pretenders to the thrones of France, of Serbia, of Russia, of Prussia and of Germany, of Saxe-Coburg-Gotha, of Hanover, from Hesse and Baden are also descendants. Wonderful items guys......great history Jupiter66, thanks for sharing that

The markings on the rear visor: IR 95, IVB, 14C, 56, 1888,1893 1 This translates to Infantry Regt 95, 4th Battalion, 14th Company, size 56cm, date of acceptance 1888. Condition 1. I believe that the 1893 represents the year in which this piece was retro fitted with M91 side posts. Even before WW1 this piece was already 26 yrs old. It is in remarkable condition. The rear spine has no slider vent. Note also, the high profile characteristic of these pre 1895 helmets.
Remember, Pillage first THEN Burn ...
Top

Sweet!
It must be a Bavarian. They always smell the worst!
Top

I am looking for a IR95 EM helmet, sooooo if anyone sees one around let me know!

Thank you for your comments

Loree: your helmet is beautiful...

Thanks gentlemen. Jupiter, if you ever come accross another JR95 epaulette for sale, let me know. Very cool to have a strap to go with the helme!
Remember, Pillage first THEN Burn ...
Top

b.loree wrote:Thanks gentlemen. Jupiter, if you ever come accross another JR95 epaulette for sale, let me know. Very cool to have a strap to go with the helme!

Hello Loree
As soon as I see one, I te starts... Otherwise there is a bracket IR 95 for sale on this site, as you already seen?

Here is another of my treasures IR95

A set of the same soldier I pursue with a "nature morte" Paul Lapp made its classes in the Ersatz battalion of the 95.JR, a Thuringian regiment.
To me it very well could then be poured into the Reserve Infantry Regiment Nr. 32, Thuringia also, to go to the front.
It would therefore be from Arnstadt and would have been seriously wounded in August 1916 in the region of Soissons where he stood with the 113.D. A picture to better begin the year 2015 These IR95 helmets are absolutely outstanding!
Very interesting thread too.

Hello
About the pickelhaube of jupiter 66, it is not possible to say if this is Saxe Coburg Gotha or Saxe Meningen
We can see the second marking after IR95 is 3BRIR82
this 3th battalion is composed of soldiers of the two duchies

Brian ;
so you want an enlisted shoulder strap
to go with your helmet ?
Not an officers epaulette

I could be tempted to add an officer JR 95 board to me collection Steve but I am going to have to wait until this years trip to Florida and the SOS are paid up and some funds saved. I will keep that offer in mind. I was just looking at the Dragoner 19 officer you sent me today as a matter of fact,

That of course, is the helmet seen in our forum logo.
Remember, Pillage first THEN Burn ...
Top