Anyone in to German military bugles, please?

the question is in the title.
I need some help regarding one I am not able to find any information about on the net.

What kind of bugle is it? I have some familiarity with the cavalry ones but not the infantry type.

Please post some picts. I own a few german infantry bugles / Signalhorn.

I'll send you some pic's in private messages.
It is mine, but not here, yet. And it might take some time to get here....
Pictures are from the seller and he don't want them on the net.

It is finally on his way!
Checking the postal service web site every hour to see if and how it proceeds....
I can post the sellers pic's now;

Of note, Mecklenburg arms are slightly different: the box in the middle is squared, while it is oval on helmets, belt buckles...

Thank you all!
@ 911 car; good eye!
Not sure thise is would make a great difference from a heraldic point of vue.
That center part is suposed to be a shield; oval for the most and squared for this particular one...
Note the" } " shape of the square body on the down side. 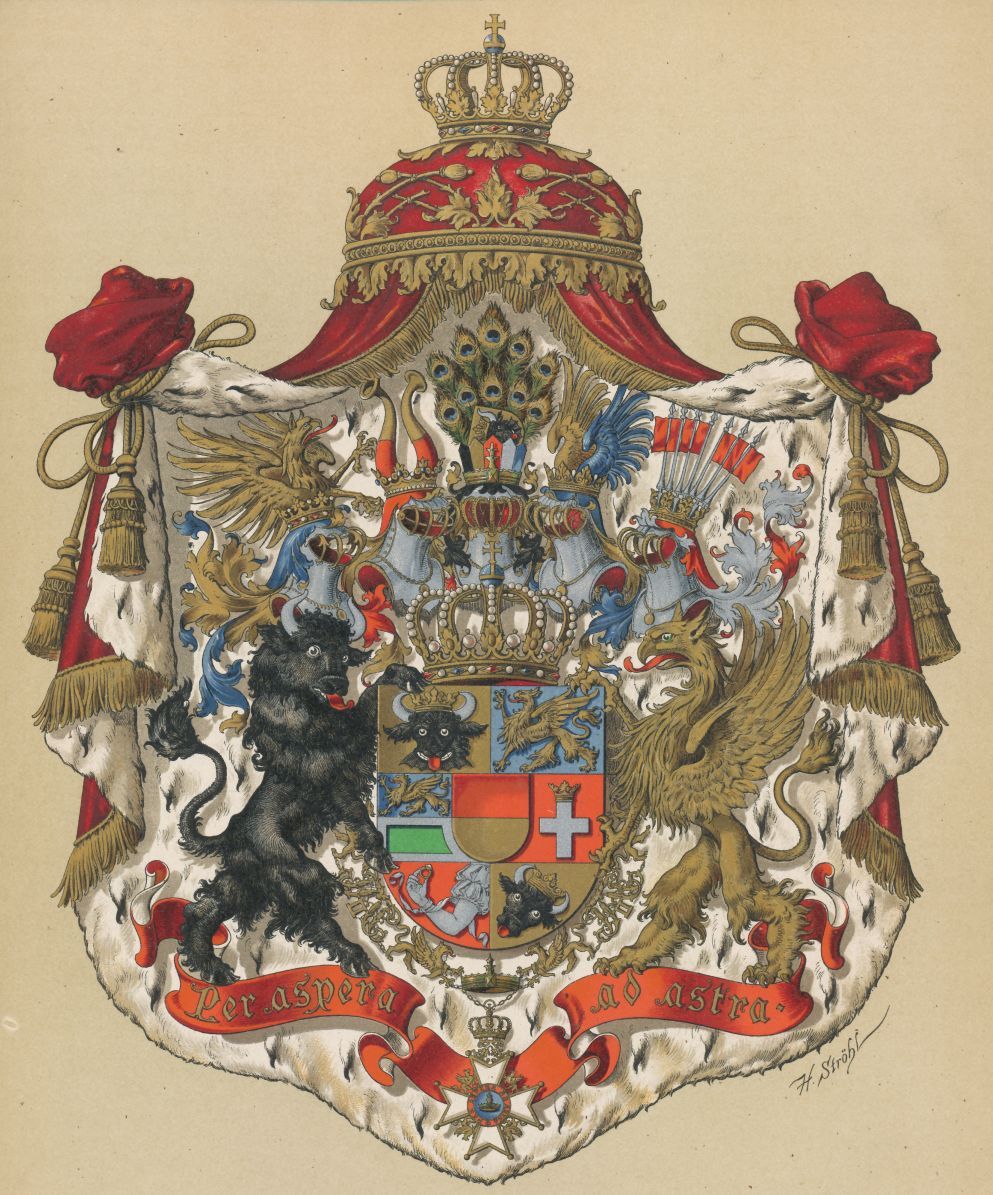 For comparison, some picts of a Mecklenburg-Strelitz M99 "double wrap" bugle, used in peace time at the II/GR89 . Then moved before mobilization to the Mecklenburg-Schwerin 4/RJR90 and finally during the war to the JR16 (impossible to tell if the prussian JR16 or the bavarian KBJR16). The RJR 90 was in front of Verdun (Douaumont and Vaux) during the fall of 1916, as the prussian JR16. But both bavarian KBJR16 and RJR90 fought between January and March 1918 in Lothringen and Elsass area.
I may think it was the prussian JR16 that used at last this bugle. It obviously has seen many front lines and heavy fire....(Helmet is from the 4/RJR90 too, same company as the bugle. Both objects may already have seen each other in the trench for more than 100 years...). 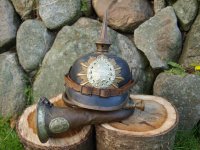 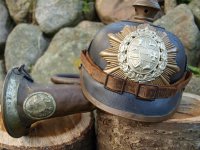 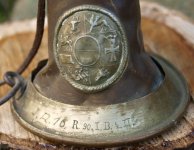 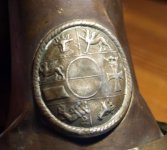 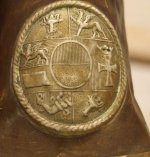 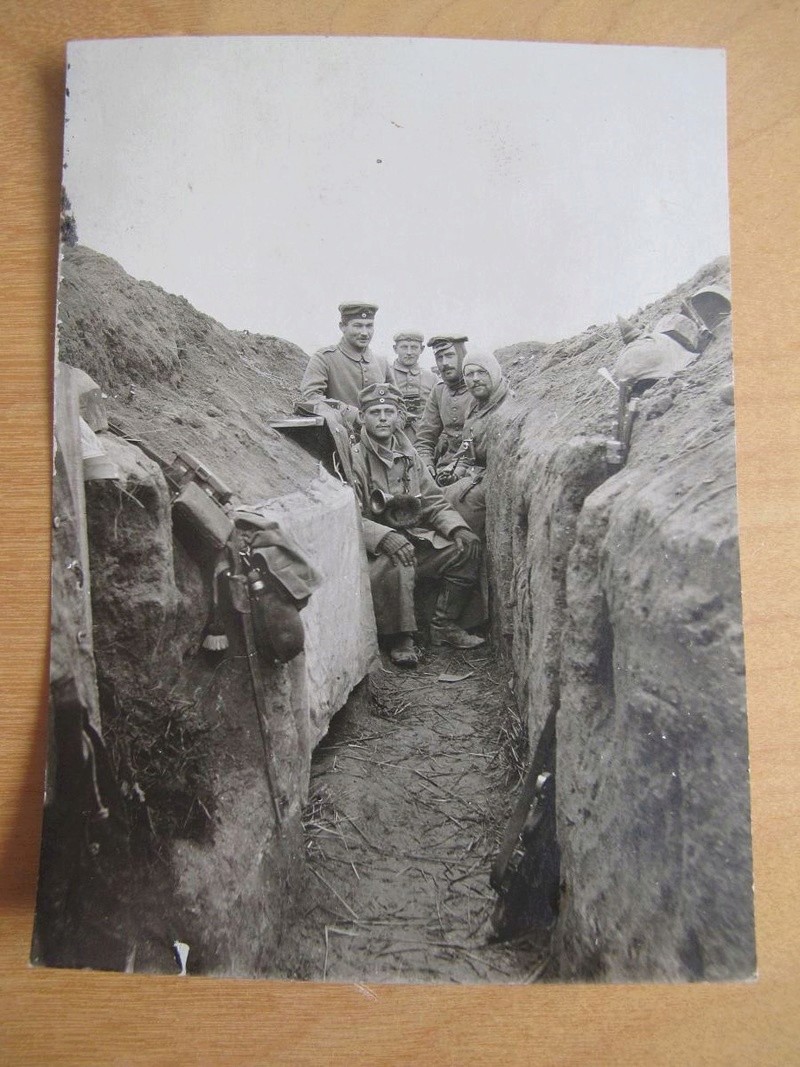 And here is how a Mecklenburg-Schwerin bugle is looking like (bugle in the front of the pict). It always have the leaves and the crown around of the center, in opposite to the M-Strelitz which center remains without this "framing": 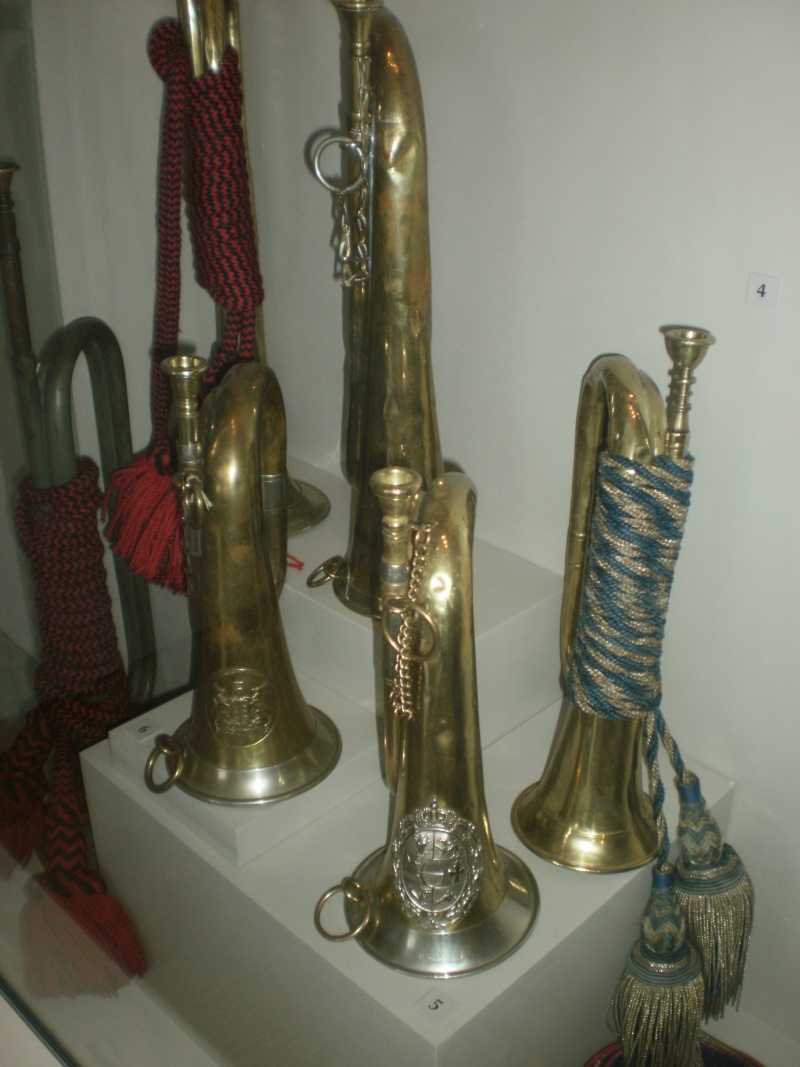 It is (finaly!) in!
Only had these medal bar to ad, near my" foto studio" in order to compare the size.

Here is a helmet and bugle from a family that brought them to the U.S. The wife was German, and she married a U.S. WW2 veteran.

Sadly I was not able to purchase either items, and missed out on them.

Thank you Alan! The buggle you are showing has the same center as mine and the center has been soldered on the wrong way

It seems to be in beautiful shape!!!