Armor from the Moro Insurrection

2015 is off to a good start. It took me a while to acquire this piece, but I'm rather pleased with it. This is late 19th century armor that was used by the Moro tribe in the Philippines. This armor came out of an old collection and likely has been on the display stand for decades! It was possibly on display in a small museum or historical society, and likely was a Moro Insurrection bring-back.

The armor is based on Spanish armor from the 17th and 18th century and is constructed from water buffalo black horn plates connected with brass rings.

That one is incredible. Interesting conflict. That is where the forty-five came from. I don't think I have the ability to put this picture up but –From "the United States does not torture" file. Soldiers from the 35th U.S. Volunteer Infantry subject a Filipino to the "water cure," a common "enhanced interrogation" technique employed during our war to conquer the Philippines, 1899-1902. This worked differently than waterboarding. You would shove a funnel into your victim's mouth and then fill him with water until his stomach distended. Then you would jump on his stomach until he vomited. The process would be repeated until the victim started talking. Americans have edited the Philippine-American War out of their historical memory because of war crimes like this, and I imagine our misadventures in Iraq and Afghanistan will be consigned to the dustbin of history a century from now.

That is super cool Peter, congrats

Wow. That is an unusual and excellent piece. Well done Peter! =D>

I don't need to acquire any more stuff however, prepare yourself to be bombarded at SOS. This is an incredible find.

Not really my cup of tea, but it's a fantastic find for sure! Congratulations!

Great stuff, although I don't know nothing about armors

well done Peter, that is uber cool, ......what's the helmet look like for a set like this?

Pretty cool Peter! Butted brass rings by the look of it? What approximately is the gage of the brass and inside diameter of the rings? (the size of the mandrel they were wrapped on.) Yes, I have to make mail for my armor. ](*,)

The styling isnt based on Spanish armor, in fact the only Spanish associated with it would be the word "Moro" meaning "Moor"... the shirt does have roots in Persia though. This type of armor can seen in various forms throughout the Middle East and throughout Islamic Central Asia going back to the Medieval period.
Perhaps your shirt found its way to the southern end of the Philippines by way of other Muslim countries like Malaysia or Singapore, and as far as India.

There are folks that specialize in chainmail and can possibly pinpoint a date and region of manufacture. Nice find!

The styling isnt based on Spanish armor,
Click to expand...

Incredibly interesting! Could be a life study. Those helmets certainly look Spanish in origin. This is really one heck of a study of an obscure little war.

The armor is most certainly Filipino made, but the exact details are more complicated as noted. The helmets are absolutely - according to every source I've read - based on the Spanish Morion helmets. The Spanish arrived in the Philippines circa 1565 CE, but by that time much of the population had already been converted to Islam - along with much of Maritime Southeast Asia. Along with the religion Ottoman, Arab and other Muslim sailors brought with them arms and armor that was soon adopted by the local populace. It is one reason why the traditions and small arms of Maritime Southeast Asia are very similar to that of the Middle East.

In fact this influence in small arms and armor, which was also seen across North Africa, likely is why the Europeans were so late to conquer these peoples. During the 17th and into the 18th centuries these peoples had small arms (and armor) that was on par with the weapons of the Europeans. This is why it wasn't really until the 1830s that the Spanish, French, British and later the Germans and Italians began to build their colonial empires in Africa and Southeast Asia. The Portuguese and Dutch were among the early founders of coastal colonies in Africa and Maritime Southeast Asia, but only when European weapons technology advanced did the European empires actually expand.

As for the Philippines specifically, when the Spanish arrived they used the term Moros (Moors) for the indigenous Muslim populations in the islands of Panay, Cebu and even Manila while the non-Muslims were called Indios, drawing upon a term used centuries earlier to describe Muslims of Al Andalus in Southern Spain during the Reconquista. This wasn't really that different from how Spanish, English and Portuguese essentially dubbed the locals of North America "Indians," etc. The actual name "Philippines" is derived from King Philip II of Spain, again much the way that we have St. Louis, Georgia, etc. Today those people that we've come to know as "Moros" don't like being called Filipino as it relates to King Philip II whose soldiers conquered the lands.

At the time of the Spanish arrival the Moros were using and making their own armor based on that from the Middle East. H. Russell Robinson in his book "Oriental Armour" noted that "The Moro coats of mail and plate have frequently been classified as Indian, Chinese, and even Japanese. They are, however, quite distinctive in that the materials used are brass mail and kabau horn plates or brass alone. In the same fashion as the other armours of mail and plate construction already discussed, the plates are arranged in vertical columns from the waist upwards..."

The armor used by the Moros at the time of the insurrection was certainly influenced by the Spanish armor used since the 17th and 18th century, as noted by Alejandro de Quesada in his book "The Spanish-American War and Philippine Insurrection: 1892-1902," where he wrote: "The dead Moro illustrated here is wearing a local copy of 17th century Spanish armor, including a burgonet-style helmet, over a leather skirt of buffalo hide."

As Joe said there is a lot to study in this obscure war, but also in its origins.
L

I was glancing through my copy of Bannerman's 1925 sales catalog and they list a similar set of armor as yours with a description of caribou horn plates joined with brass rings, price?, $100. That was a fair amount of money in 1925, would have bet a month's wage for a lot of folks. The image is rather murky but the wearer is shown with a conical style helmet on his head...who knows, maybe the helmet they just had laying around..

The Moros and other tribes in the Philippines did most certainly use a conical type hat - sometimes known as a "salacot." These were akin to the "peasant hats" seen throughout Southeast Asia. I actually wrote a piece on the conical hats and the military connection for my website:
http://www.militarysunhelmets.com/2013/the-conical-hat-of-asia" onclick="window.open(this.href);return false;

I tend to buy these hats up at the militaria shows when they're cheap. Nearly EVERY one I've bought was supposedly from Vietnam. I think only two for sure are truly from Vietnam and most are older and probably from around Asia. The Holy Grails would be ones used by the Hong Kong Police or by the French colonial volunteers.
http://www.militarysunhelmets.com/2012/conical-asian-hat-of-the-hong-kong-police" onclick="window.open(this.href);return false;

Staff member
Congrats on that armour Peter, very interesting history behind it.
L

Here is the image we discussed, my apologies for the quality, my copy of the 1925 Bannerman catalog is pretty poor. I checked in an original 1945 catalog, and in a better quality reprint of the 1903 catalog, but this listing doesn't appear in either. 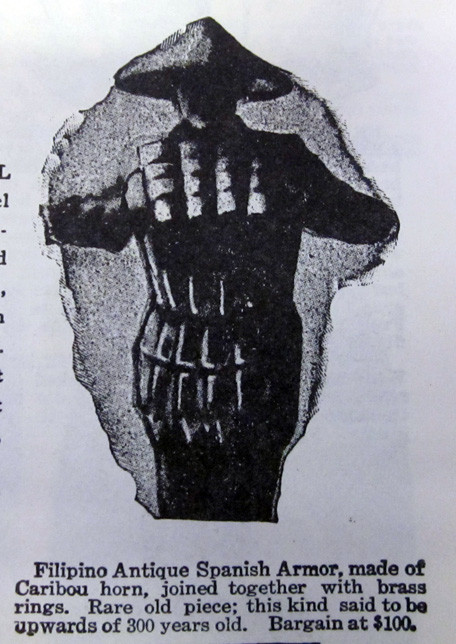 Thank you for posting the image. The price... $100. That would have been a LOT of money back in 1925. According to an inflation calculator that would be $1,347.10 in today's money, which is still less than what I paid today for this item. Of course that's just straight inflation, not counting a plethora of other factors.

As for the type of headgear... I actually have a very similar type of hat/helmet displayed with my armor now. The Moros did wear a sturdy conical hat, and it would seem there was more Moro armor than Moro helmets. The armor might not have been easy to make, but the helmets required a more complicated level of metal work. There are photos of warriors without helmets and I would assume the typical conical hats were used along side the brass helmets.
You must log in or register to reply here.
Share:
Facebook Twitter Reddit Pinterest Tumblr WhatsApp Email Share Link
Top