I wanted to show a combination I've been working on for a while for a Bavarian Infantry Officer. The tunic unusually, has only 5 buttons on front rather than usual six.
Tresse round the collar in full as was the wont early on and the 1866 pattern pickelhaube with parade plume, belt and gloves. I will add close up pics at a later date of the parade sash, pickelhaube with plume and awards cushion....

The Officers storage foot locker is named to a Reserve officer of IR9 ..Bavarian of course ! 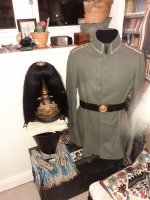 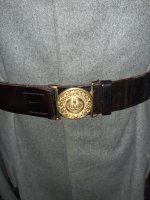 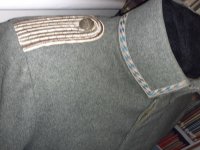 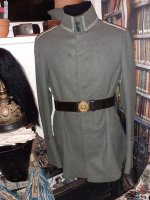 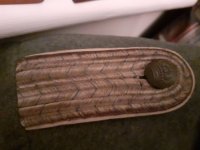 Staff member
Where would you like me to move it Tony? Not a problem. (other Tony)

Hi Tony, guess it's best suited in the German Uniforms Forum. If you would so kind it's appreciated. Happy Xmas.

(other, new to the forum, Tony)

It reads like it is for sale? I can move it to the sales area. No problem.