There was a comment from Steve Nick in my recent post on British helmets about the expense of the die used to fabricate a lance cap plate. The one shown was on a 16th Lancers trooper's helmet. The officer plates were even more elaborate, being gilt with silver overlays. Below are a couple of officer plates with the other rank equivalents in brass. Apologies if not all the detail is well defined-the curvature makes photographing it difficult-at least for me!

5th Royal Irish Lancers officer plate 1882-1885. Plates can be dated by the changes in battle honours shown. Officer plates were sewn on to the tschapka using the little holes which are visible in the tips of the rays. Trooper's plates were attached by screw posts and nuts. 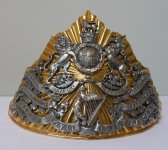 The rear shot shows how the overlay is pinned. The tablet in the middle shows the makers 'Hobson & sons, 1, 3 & 5 Lexington St , London W1'. The firm moved there in 1880, which fits nicely with the dating of the plate. 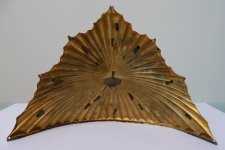 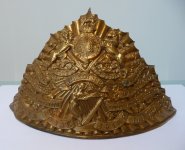 17th Lancers officer plate 1879-1902. They took part in the famous but disastrous charge of the Light Brigade during the Crimean War. 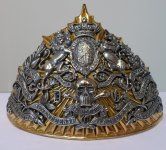 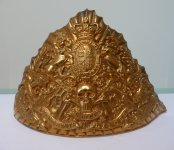 Hope these are of interest.

chinstrap said:
17th Lancers officer plate 1879-1902. They took part in the famous but disastrous charge of the Light Brigade during the Crimean War.
Click to expand...

Wow Patrick! I have coveted one of these for years. How nice to finally see one :thumb up:

Thanks Tony. I was lucky to get it a few years ago from a collector friend. I'll let you know if I ever come across another one.

I've added an additional shot of the back of the 17th trooper's plate to show the post and nut fixings. 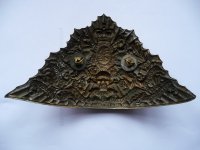 Staff member
Fantastic quality and detail. The workmanship is amazing.