I discovered a photo in an archive today totally by chance, this portrait shows a Chinese officer dressed in German style uniform. His overall appearance matches a newspaper clipping in my collection, it shows seven Chinese officers who studied military affairs in Germany in 1903 (官派留德学生). Fellow forum member Chris also documented a number of photos showing similar uniforms on his website a few years back: http://www.germancolonialuniforms.co.uk/uniformphotos chinese officers.htm
Now it can be known these uniforms were specially designed for these students. Including double-breasted service tunic, Litewka, Überrock, Kepi like dress cap, visor cap, sash and a hussar style sash used for service uniform. For officers attached to hussar regiments had Attila, busby and other accessories. Chinese dragoon symbols can be seen on cap badges, buttons and bandoliers. However, I'm not able to find any dress regulations or period illustrations about these garments. 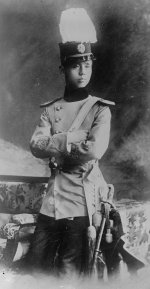 He probably is 金海 (Djin Hai), sent to Germany for military training in 1904. Unit not yet known. 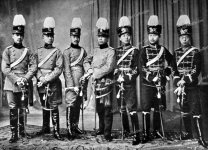 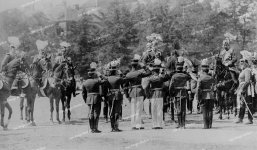 Staff member
Amazing photos from a very little known era of Chinese/German History and in fact on a broader note, the entire European involvement in China during this period. The fact that you can name these individuals in the one photograph, as well as list their assignments to German Regiments brings everything together. Again, my thanks for joining the forum and showing us your German collection but also opening up this other Historical avenue of European influence in China. I was aware of it, as a result of my university studies but it is good to see it revealed once again in 2022.

Hi, chinese officers also existed in the early Reichswehr.
Attached a picture of the 13th (Mine Thrower) Company of the 12th Inf.-Regt. (Reichswehr) from about 1930.
In the middle you see a (Shao-wei) lieutenant of the Chinese-Army (Chung-kuo Lu-chun), possibly from the "Whampoa Academy",
or "Chinese-German Cooperation (1911-1941)" (so someone told me).
Best regards,
Jens

I'll add this pic. What I wouldn't give for this helmet!

Astonishing photos, Many thanks for showing here.

Arran said:
I'll add this pic. What I wouldn't give for this helmet!
Click to expand...

Wappen on the helmet is unique. It looks like a dragon but hard to determine because of the angle.
A

Yes, it is two dragons facing each other on either side of some insignia. There is also an example of a classic leather pickelhaube with this plate in the C.E. Juncker catalogue!

Staff member
This photo brings up all sorts of questions for example the colours of the kokarden, any record of what those were? They are obviously, the proper size.
L

Does anyone know of surviving examples of these helmets?

Arran said:
I'll add this pic. What I wouldn't give for this helmet!
Click to expand...

I believe he was from Siam

KIR145 said:
Hi, chinese officers also existed in the early Reichswehr.
Attached a picture of the 13th (Mine Thrower) Company of the 12th Inf.-Regt. (Reichswehr) from about 1930.
In the middle you see a (Shao-wei) lieutenant of the Chinese-Army (Chung-kuo Lu-chun), possibly from the "Whampoa Academy",
or "Chinese-German Cooperation (1911-1941)" (so someone told me).
Best regards,
Jens
Click to expand...

Jens,
This is a great photo, thanks for sharing! I It's the first time I see a Chinese officer in the Reichswehr, indeed rare.

Siam plate would have an elephant it’s design. I have not seen any military or civil insignia from Siam with dragon. But I can not say that I have seen all. Having said this, few princes from Siam when the country was called Siam, were educated in Germany. There are pictures of Thai royal family in German unifroms prior to the war.
A

Could you by any chance post those pics of the Thai royal family in Germanic uniforms? 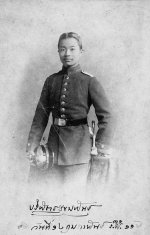 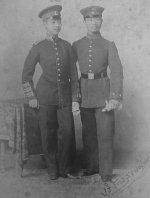 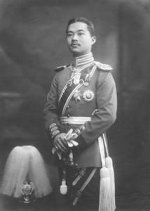 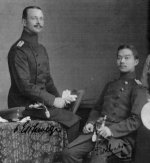 Served in the Garde-Grenadier-Regiment Nr.4.
Discharged from service as Hauptmann in 1903. Later made à la suite of the regiment.

After closer examination I do think the Kürassier helmet plate have the same design with the cap badge of the Chinese officers. It's very possible, I hope there're more information. 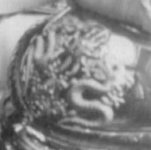 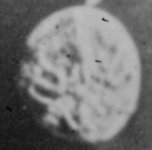 The gentleman to the right of Prince Paribatra is Oberleutnant Arthur Julius von Eschwege assigned as the Prince’s military escort officer (Militär-Begleiter) from 1 April 1902 to 10 March 1903. He was killed in action on 24 October 1914 as a Major and battalion commander in the 1. Garde-Reserve-Regiment.