Here is a helmet I bought this summer. It was sold to me as a "Bolivian" helmet, but the seller probably didn't realize that Colombia is one of the Bolivarian nations in South America. This confuses people who don't understand that Bolivar is referred in several nations and that Bolivia wasn't actually part of Gran Colombia!

Anyway, this helmet has a plate that includes the Colombian Coat of Arms circa the nation's civil war - known as the Thousand Days' War. It was fought between the Liberals and Nationalists, and later the Liberals and Conservatives.

Colombia was one of several nations that had taken Prussian/German designs with equipment including pickelhabues and small arms.

This helmet appears to me to be similar to the Imperial German Navy and German Foreign Office dress sun helmets of era. My working theory is that this was probably supplied to an officer as a prototype or a small number were supplied.

Photographic evidence shows that the Colombian Army (supporting the Nationalists and later Conservatives) wore pickelhaubes, and it is likely some officers may have been equipped with sun helmets. 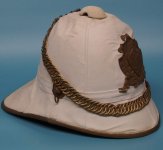 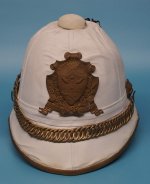 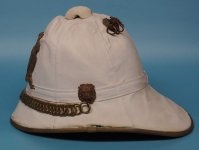