Long before I got into collecting Imperial German militaria I was an avid student of military history and read quite a bit about Wellington's Peninsular Campaign and the exploits of the Kings German Legion (KGL) in that campaign(expat Germans that fled the Napoleonic occupation and joined the British army to fight for the Elector of Hannover who was also the King of England). I was thrilled to discover that several Hannoverian cavalry units (including the 13th Uhlan) could trace their roots to the various KGL cavalry units. 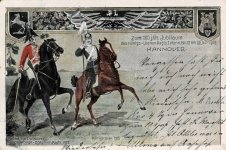 A couple years ago I stumbled across this and couldn't resist. This document is for an Uhlan in the 2nd Royal British Hannoverian Uhlan Regiment. The document is dated 1827 and it appears the individual had served for 10 years. That would have been about 2 years after Waterloo and this unit is likely connected to the KGL. The wax seal show the crest of Hannover (nearby Braunschweig also has the leaping horse in its crest). 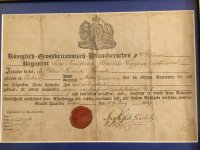 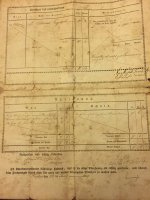 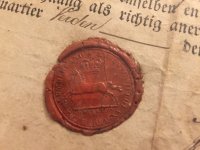 Many of the Hannoverian and Braunschweig units bear battle honors from service in the KGL. The most interesting of these is the engagement at Garzia Hernandez in which the 1st and 2nd KGL Dragoons single-handedly broke and routed 3 French infantry squares. This was a rare feat for the time and became the talk of Wellington's army. 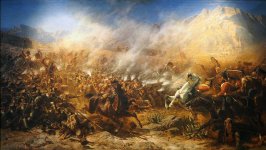 Do you know which KGL units ultimately formed the 13.U.?

That post card suggests its the 1st Heavy Dragoon Regiment. The KGL was raised by and under the command of the Duke of Cambridge. I seem to recall reading that it was from one of the squadrons of this regiment. Unfortunately my source for that was an electronic copy and I lost it when my hard-drive crashed a couple years ago. It will be in the 1st hundred years history for the 13th UR. That was the source I think I saw it in.

Hi Neil, I think all the Garde regiments were Hannoverian (Hannover was independent of Prussia till 1866). I think the units that were originally KGL were merged into the Hannoverian army and took on various forms of cavalry roles before becoming Uhlans. Hope you are doing well this holiday season!
N

Thank you Bob. I have pretty much hibernated through the holidays. So, not much going on, but I am blessed--no complaints.

Look, I have researched all of the Imperial cavalry units and written up a brief history on each, at least as much history as I could find. I would like to send the 13U write-up to you for your corrections, comment and additions. Would you be receptive to this?

I'd be happy to, though I may not know any more than you do.

The British army took Dragoon regiments (a Dragoon got paid less than a cavalry man) and made them into Light Dragoons. Some of these were then converted into Hussars and Lancers. Given Hanover's close association with Britain they may have followed this same practice.
Hanover is the reason Britain was able to invest in her Navy. The Hanoverian Army was use by the early Georges to keep things in check on the ground in Europe. I believe it was even larger than the British Army before Boney came on the stage.
G

Strictly speaking, there was no actual physical connection between the Königs-Ulanen or for that matter any unit created in the province of Hannover after 1866 with the former Royal Hanoverian Army; it was a later awarding of "traditions" by Kaiser Wilhelm II that created the bond. The newly created lancer regiment in Hannover was assembled from four fully formed existing squadrons of the Prussian Guards Corps, namely the 5th squadrons of the Regiment Garde du Corps and the 1., 2. & 3. Ulanen-Regiments.

It was the "All Highest Cabinet Order" or A.K.O. of 24 January 1899 that stipulated that the regiment "should be considered as one" (soll als eins angesehen werden) with the former Royal Hanoverian Regiment Garde du Corps and determined a formation date of 19 December 1813. A supplementary AKO dated the same day was the one authorising the introduction of the various helmet Bandeau for the Hanoverian regiments/battalions.

Staff member
An interesting discussion gentlemen but way beyond my knowledge of this subject or era of History.