From the land of the Rising Sun, Imperial Army Shako

I’d like to share with you this example of a seldom encountered Imperial Japanese Army, Meiji Era, enlisted full dress shako. From what I can gather this pattern dates from around 1886 and was worn in this configuration by line units, with the Imperial Guard wearing a similar shako but with a red body.

The difficult part of any discussion of this era’s uniforms and equipment by a non-Japanese speaker/reader is the lack of English language text available regarding the subject. There are a few collector’s books available dealing with this era, however most of those rely on drawings rather than photographs of actual artifacts, all with Japanese text.

Regardless, these artifacts do exist and deserve their place in the realm of militaria discussion and I hope the Pickelhaube Pals will be happy to read-on. Comments and additional information are most welcome.

During the reign of Emperor Meiji (1868-1912), Japan was in the midst of a major transition from a centuries old feudal society into the modern era, embracing much of the then, current Western technology during this transition.

In the military sphere, this transition occurred quite rapidly, the result of major influences by visiting European military missions. The French Army, then under the rule of Napoleon III, provided a great influence in uniforms and rank structure with this shako displaying that influence with a touch of German as well.

A basic description of the shako is as follows, lacquered leather body with a sewn visor with a bound edge, with the underside of the visor and sweatband in dark green Moroccan leather. There is a black painted, domed metal ventilator on each side of the body, a brass chinstrap boss below with a German style single brass chinstrap segment. The remainder of the original chinstrap would have been a simple leather strap with a steel or brass securing buckle. On the front of the shako is an elaborate brass starburst emblem, with a narrow, metal reinforced hole in the shako’s top for a feathered plume. The interior of the shako displays a wide 19th century style leather sweatband, with a white muslin lining with drawstring and a paper label glued into the top. 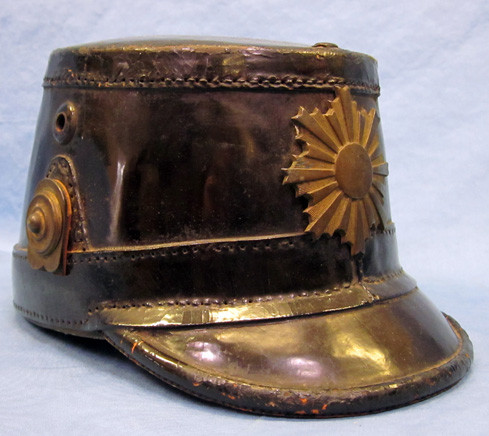 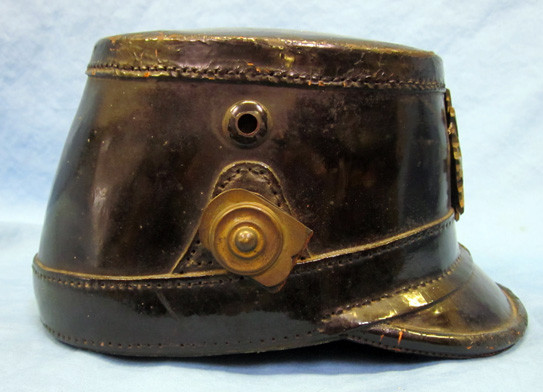 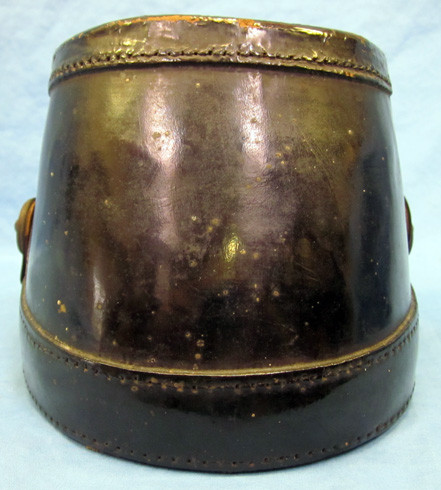 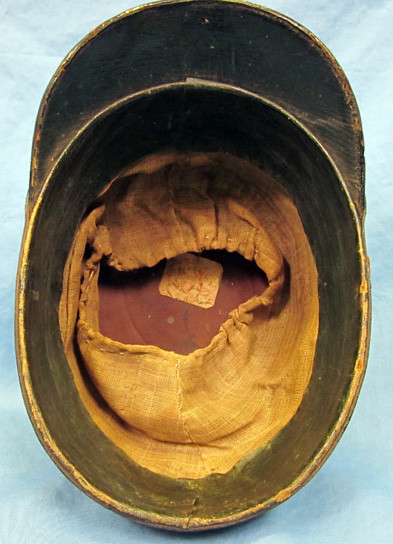 The other photographs are provided to act as a sort of filler with the color photograph illustrating another surviving example of the enlisted shako. That photograph and the image of the three enlisted men (with the soldier on the left wearing a similar pattern shako), are courtesy of the collection of Nakata-San, of Nakata-Shoten, Tokyo. They appear in his book, Imperial Japanese Army & Navy, Uniforms & Equipment, Vol. II. 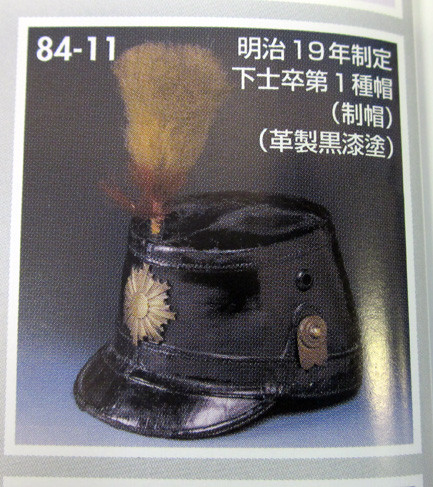 The visor hat is a Meiji Era Army Warrant Officer which rests on the scabbard of a similar era officers kyu-gunto service sword with a Russo-Japanese War Campaign Medal to the side. Of interest is that the blade of this sword dates between 1620-1640, nicely illustrating the honor-tradition of Japanese officers carrying centuries-old family swords into battle. 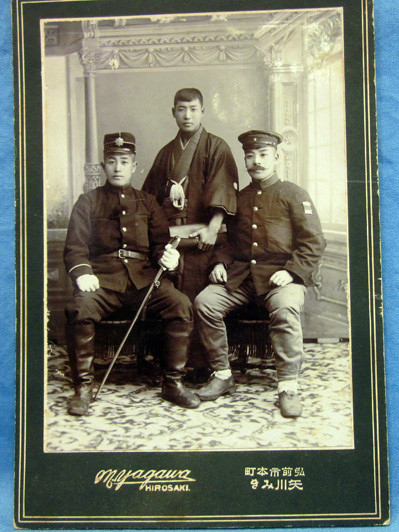 Great, thank you !
I once saw a photo of a giant pile of swords and daggers shovelled into a melting oven. 1945. So sad.
So much magnificent stuff was destroyed.
Francis

The pre-WWII Japanese stuff is very rare. I think so much of it simply didn't survive the bombings of Japan.
L

Thanks Stuka, glad you liked it...

Hi Francis, I've seen similar photographs of what you are describing, you are quite right, what a waste...

Thanks Peter and yes, this era material is difficult to find in Japan, but is available if one looks for it. There is a very interesting section detailing Japan's victories in the Russo-Japanese War 1904-05 at the Yasukuni Shrine museum in Tokyo. The display is very impressive with some rather graphically damaged soldiers uniforms complete with bloodstains.

Being an ancient culture it's not too surprising what can show up at Japanese fleamarkets. About 10 years ago on one of our trips over, we visited a Shrine sale rather late. In spite of the lateness of the day, I was able to purchase a complete set of late-Edo period (around 1820), black lacquered samurai dress armor in it's original storage box, for less money than a Prussian officers pickelhaube in decent shape. It wasn't combat armor, but it looks just like the fighting armor, just lighter guage steel. Getting it home was fun but we managed it. I have the helmet on display but the rest of the armor sleeps peacefully in it's storage chest.

Larmo said:
Thanks Peter and yes, this era material is difficult to find in Japan, but is available if one looks for it. There is a very interesting section detailing Japan's victories in the Russo-Japanese War 1904-05 at the Yasukuni Shrine museum in Tokyo. The display is very impressive with some rather graphically damaged soldiers uniforms complete with bloodstains.
Click to expand...

I've been to Japan twice on business and other than seeing factories the company that hosted the event thought we'd like to visit electronic stores. We visited one castle and the old imperial palace in Kyoto, but no museums unfortunately. Perhaps I'd like Japan more if I had visited the museums. It has been 10 years since I was last there and I have no desire to return.
You must log in or register to reply here.
Share:
Facebook Twitter Reddit Pinterest Tumblr WhatsApp Email Share Link
Top