When the French adopted the 8mm Lebel in 1886 the German army began searching for a similar weapon to counter it. The Gewehr Model 1888 Commission Rifle was the answer.

This rifle was the result of a German Army Commission which combined the magazine of the Mannlicher and the bolt action of the Mauser Model 1871/84. As a result, the rifle is referred to as a Mannlicher and as a Mauser. This one was manufactured in Amberg in 1889. 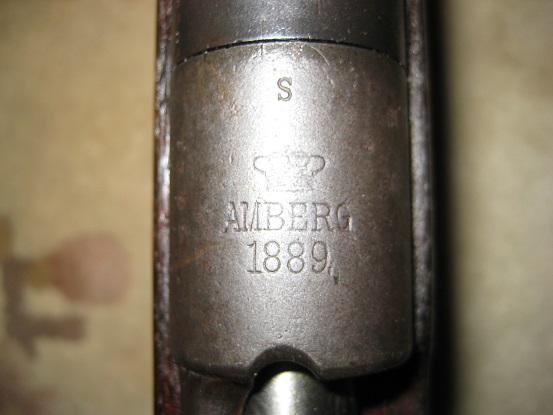 The Gew88 used a 7.92 X 57mm cartridge. The brass cartridge shell is the same as the modern 8mm Mauser round, but the projectile is .318-inch instead of the modern .323-inch projectile. The use of WW1 8mm Mauser rounds, adopted in 1903,** often resulted in a split barrel. Most rifles were modified to use the .323 bullet. When the modification was made the barrel was stamped with an “S”, as shown above.

Even if the rifle is stamped with an “S” it is not advisable to fire newer 8mm Mauser rounds through this rifle. The breech is not designed to hold up to the pressures created by these cartridges.

The sights were modified to correct for the newer "S" round after the modification was made. 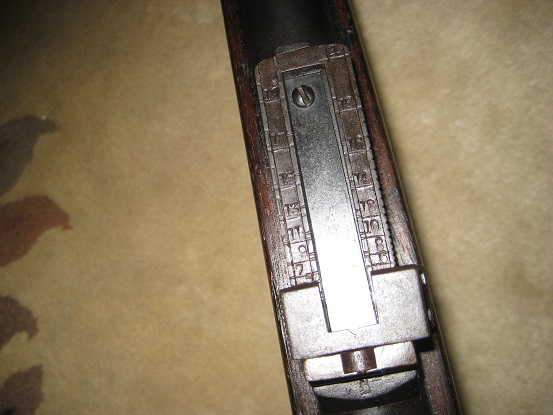 TheGew88 used a five round Mannlicher clip which could be loaded from either side down. 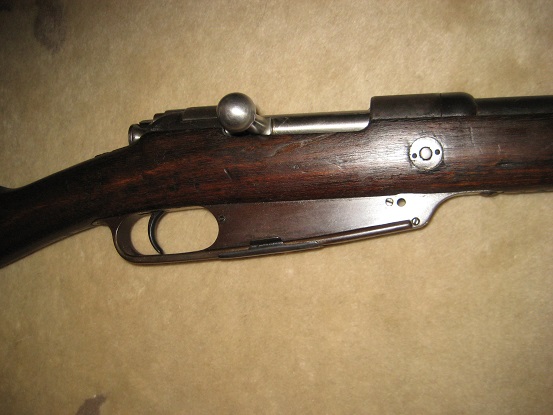 Initially the clip dropped out of the bottom of the magazine, but this was later modified. Some were fitted with a plunger that ejected the clip out of the top when the last round was fired, similar to an M1 Garand. The hole was covered with a stamped plate when this modification was made. 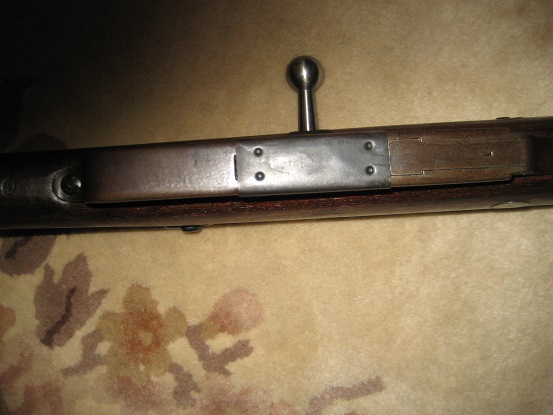 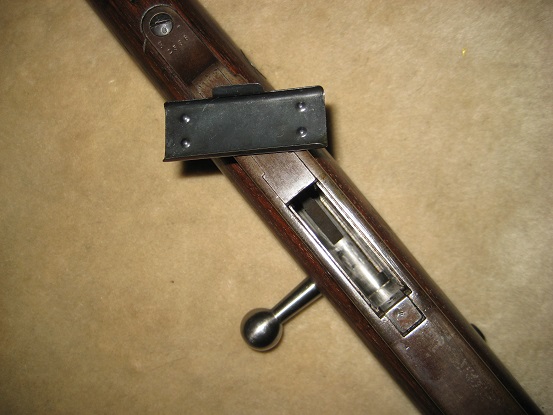 The rifle barrel was encased in a steel tube which was the main reason that this weapon was hated by the German foot soldier. 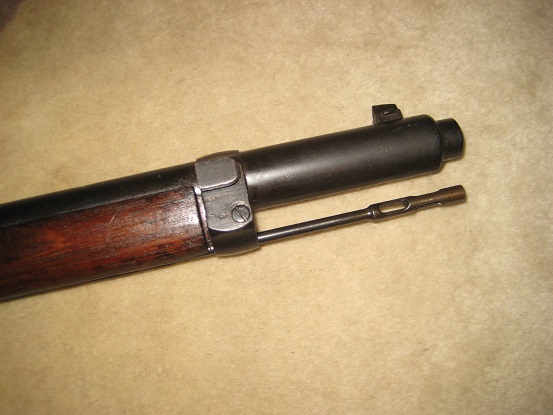 The tube was easily dented which allowed water intrusion and affected the front sight which diminished accuracy.

Removing the steel tube was difficult and beyond the scope of field stripping. The barrel would get hot and condensation formed inside the tube causing the barrel to rust. If the weapon was not fully dismantled and adequately lubricated eventually the barrel would split or blow up when fired.

The Model nomenclature was printed on the side: 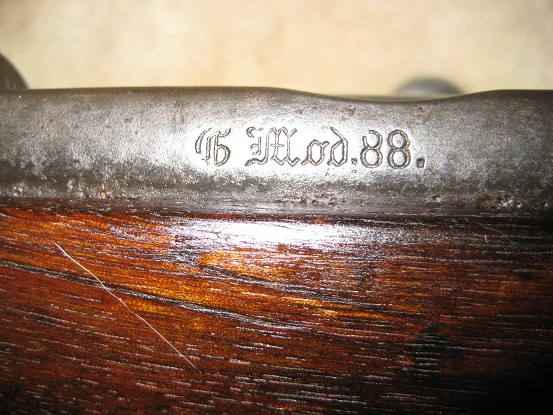 The acceptance marks, proofs, are stamped into almost every steel piece. Examples are shown here: 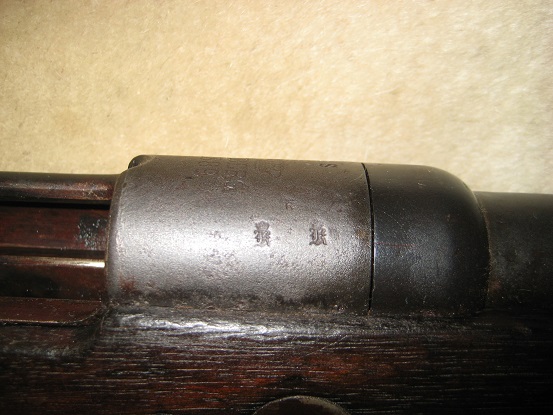 This weapon was used by Austria, in limited numbers, throughout WW1.
It can be seen in photographs being used as late as 1945 by the Volkssturm Wehrmacht.

I have fired this weapon several times after finding some old ammunition at a gun show. It chambers easily and is "fairly" accurate, but definitely not the best. I found it far less accurate than it's replacement, the Gew98. I would definitely not fire this weapon without fully inspecting it. I completely dismantled this one, inspected for rust, inspected the bore, checked the chamber, checked the headspace, and lubricated the piece before I fired it.

If I had to make a list, I would place this weapon in the top ten of the worst military weapon designs ever.

Although I don‘t collect weapons, a very interesting post.
Thank you for sharing John :bravo:

Staff member
Thanks John. Nice to see one.

I've owned several of these weapons, I like them. Anyone thinking of picking one up, check it out carefully. There was a group of these imported after WWI that had the firing pin clipped and the face plate of the bolt removed, making them non-firing. Also be aware of the "S" stamp.

Thanks for posting this! =D>

The example that my Dad gave me 45+ years ago has the "S" stamp on the receiver. It's currently at my parent's home, and I haven't looked at it for many years. I'll have to make a point to have my Dad get it out for me to see again, the next time I visit them. I don't recall the maker, but I'm thinking it might be Amberg as well.

That's great! I love the way the rifles are covered with acceptance stamps and every tiny little part (even things like the front sight blade or the extractor clip) has matching serial numbers. How German!!

Great stuff. I have one that was used by the Imperial Chinese Army during the Boxer Rebellion. I'll have to take a photo so I can share.

Thanks for the responses!

Here are a couple of Youtube videos that give a complete run down of this weapon's convoluted history:

It takes about an hour to watch them both, but I strongly recommend them.

Here's a gent posing with a Gew88 from the 103rd Landwehr: 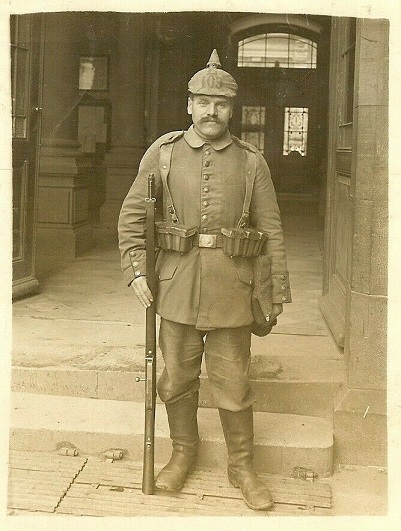 He is wearing a model 1907/10 Feldrock illustrating the extended lifespan of the Gewehr 88 even after the Gewehr 98 was fielded.