Studio portrait of Robert Alexander Bürkner (1870-1925). The photo was taken in 1909 at Frankfurt am Main when Hauptmann Bürkner served in the general staff of the XVIII. Armeekorps. He wore the General staff officers’ uniform while holding a Pickelhaube with a square visor in his hand, helmet plate was a silver Garde eagle. The sword carried by Bürkner had a flaming grenade fixed on the grip, just under Kaiser Wilhelm II’s monogram, indicating his early career in the Grenadier-Regiment Nr. 12.
Bürkner’s medal bar consists of two awards: Wilhelm I Centenary Medal and a rare Imperial Chinese Order of the Double Dragon in 3rd Class, 3rd Grade「御賜三等三級雙龍寶星勳章」. According to the rank list, Bürkner’s CDIII3 was awarded in 1896 during Li Hung-chang’s「李鴻章」visit to Germany when he was an Infantry Sekondeleutnant. However, his role in the reception is unknown. 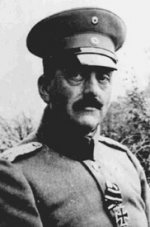 Excellent photo and biography! Thanks!