Help Needed with Cipher on Flag

I need assistance with figuring out the Cipher on the reverse side of this 1930's era veterans flag that belongs to a friend.

Is this a cipher "L" and an "A" or a "U" in the old Gothic script? And if so, who does this cipher combination represent? It's not any of the old Dukes or Grand Dukes from the Duchy of Saxe-Weimar-Eisenach, dating as far back as 1809 with Charles Augustus.

The flag is a 1930's era NSKOV veterans flag for the Kreis District of Eisenach, which of course made up the area of the old Saxe-Weimar-Eisenach.

The border colors on the reverse of the flag are indeed correct for the old Imperial German era Saxe-Weimar-Eisenach: Green-Gold/Yellow-Black

I presume the dates in the corners of the flag are for Napoleonic battle honors that this unit dates back to.

The other side has the NSKOV lettering on a black shield with "Kreis Eisenach" in the upper left corner. And the part I'm not showing has an early, flat 3rd reich emblem on it.

The flag has absolutely gorgeous workmanship on the embroidery.

Thanks in advance for any assistance that anyone can provide here. 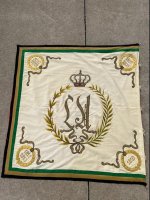 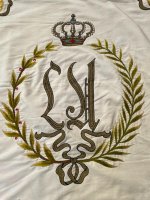 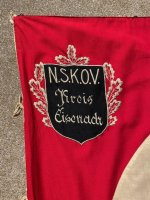 Many thanks Steve, I appreciate it!

It certainly has me puzzled at the moment.

I think it is a crowned „CA“ and stands for „Grand duke Carl-Alexander of saxe-Weimar“. In Kurrent, a German script of the 19th century, the „C“ looks like this. The years all represent campaigns of the 94th Infantry Regiment.
Alphabet Baroque Current
Last edited: May 16, 2022

The 94th regiment was the only thing that I could associate with Saxe-Weimar-Eisenach.

I simply did not understand the shape of the letter "C", and I thought it was similar to an "L", and thus it made no sense to me.

I also had never seen the letter "A" in this fancy of a style. I'm totally unfamiliar with the use of Kurrent, a German script of the 19th century. I had been looking at Gothic letters, and was totally confused until you provided your excellent insight here.

Many thanks for your great help here, I appreciate it!

Alan, you are very welcome. I also thought the „C“ was an „L“ first, but the style of the fonts changed with the years. This alphabet was called „Baroque Current“ and was used in napoleonic times around 1800 +/-. In later years, the typeface became more straightforward and didn't have as many flourishes. And around 1914 the Sütterlin developed from this, which is basically a simplified form of the Kurrent.

Sandmann said:
Alan, you are very welcome. I also thought the „C“ was an „L“ first, but the style of the fonts changed with the years. This alphabet was called „Baroque Current“ and was used in napoleonic times around 1800 +/-. In later years, the typeface became more straightforward and didn't have as many flourishes. And around 1914 the Sütterlin developed from this, which is basically a simplified form of the Kurrent.
Click to expand...

Yes, the many flourishes definitely threw me off on recognizing the "C" and the "A" letters.

My friend will be very happy to learn that this side of the flag is recognizing the 94th Infantry Regiment battles.

Many thanks once again for your kindness in recognizing the ciphers and setting me straight on them, I appreciate it! 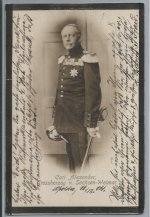 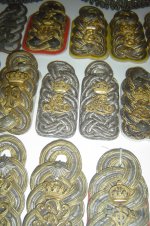 From memory I was incorrect .
I do NOT have a pair of shoulder straps of Carl Alexander
I have a single shoulder strap as Chef of I R 94
He has 4 rank stars which carries the title Col. General
with the Honorary rank of GFM
What is strange is that due to the time frame when he wore
this strap the proper insignia at the time according to regulations
should have been 3 rank stars with crossed GFM Batons
never the less here it is
Steve 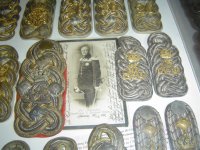 Just for information, here are 3 different German fonts for a quick overview (Sources: www.kurrent-lernen-muecke.de ). These helped me a lot in the past: 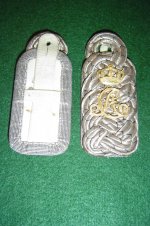 Staff member
Sandy...thank you very much for your post here regarding this flag and strap cyphers. However, could you please post it again in the period photo/post card section section where we see so a lot of the German script. It gives us so much insight into the lives of people from the past when we can read their thoughts!

No problem Brian. I started a new thread in the postcard-section.
J

Sandy,
Thank You! These examples of the old script are excellent. Finally, I might be able to determine and translate what is on my WWI Patriotic Post Cards.
Best regards,
John