I called two girls hipsters today and got slapped.

A man wakes up one morning and is surprised to find a gorilla on his roof. He looks in the Yellow Pages and sure enough, there's an advert for "Gorilla Removers". He calls the number, and the gorilla remover says he'll be over in 30 minutes.

The gorilla remover arrives, and gets out of his van. He's got a ladder, a baseball bat, a shotgun and a mean looking pit bull.

"What are you going to do," the homeowner asks?
"I'm going to put this ladder up against the roof, then I'm going to go up there and knock the gorilla off the roof with this baseball bat. When the gorilla falls off, the pit bull is trained to grab his testicles and not let go. The gorilla will then be subdued enough for me to put him in the cage in the back of the van." As he says this, he hands the shotgun to the homeowner.
"What's the shotgun for?" asks the homeowner.

"If the gorilla knocks me off the roof, shoot the dog."
W

Just after my wife had given birth, I asked the doctor, "How soon do you think we'll be able to have sex?"
He winked at me and said, "I'm off duty in ten minutes - meet me in the car park".
W

Took the wife to a nightclub last weekend. There was a guy on the dance floor giving it large, break dancing, moon walking, back flips the lot. My wife said to me, "That guy proposed to me 15 years ago and I turned him down."
I said, "Looks like he's still celebrating."
W

Doorbell rang last light and when I got up to answer it there's my mother-in-law sitting on the front step.

"Can I stay here for a few days?" She pleaded "What do you think I am, a heartless bastard?" I said "Sure you can."

Then I closed the door and went to bed..
W

udas: "Are we still on for Friday?"

Why do Norwegian warships now have giant barcodes down the side?

So when they get back to the harbour they can just Scandinavian.
W

My dad always had one rule when he was in the theatre, ‘always leave them wanting more’.

I saw an advert in a shop window which read: "TV stuck on full volume, for sale, just £1."

My wife is having some problems with breastfeeding so I phoned up the Doctors to make an appointment for her.

"Is this her first baby?" enquired the receptionist.

A blonde, wanting to earn some extra money, decided to hire herself out as a "handy-woman" and started canvassing a nearby well-to-do neighbourhood. She went to the front door of the first house, and asked the owner if he had any odd jobs for her to do. "Well, I guess I could use somebody to paint my porch," he said, how much will you charge me?" The blonde quickly responded, "How about £50?" The man agreed and told her that the paint and everything she would need was in the garage. The man's wife, hearing the conversation, said to her husband, "Does she realise that our porch goes all the way around the house?" He responded, "That's a bit cynical, isn't it? The wife replied, "You're right. I guess I'm starting to believe all those dumb blonde jokes we've been getting by e-mail lately." A short time later, the blonde came to the door to collect her money. "You're finished already?" the husband asked. "Yes," the blonde replied, "and I had paint left over, so I gave it two coats." Impressed, the man reached into his pocket for the £50.00 and handed it to her. "And by the way," the Blonde added, "it's not a Porch, it's a Lexus'
W

Last night I lost my watch at a party. An hour later I saw a guy stepping on it whilst harassing a girl. I went over there and punched him.

Nobody should do that to a woman.

Not on my watch.
W 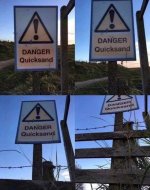 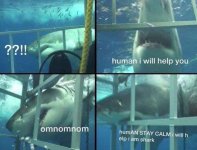 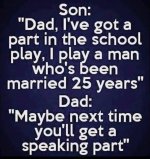 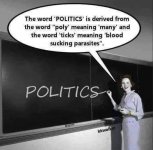 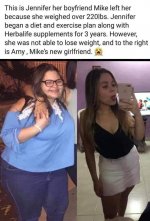 I see all the humor in that .

My wife not so much.

Looks like it did not transfer THE DAD TALKING TO SON ABOUT PLAY.
W