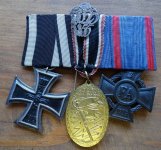 Kyffhäuser Bund Medaille am Band 1914/18 " Blank die Wehr - Rein die Ehr. Post war soldiers association subscription medal. The failed Austrian painter and his crazed cabal made medals like this illegal, the Hanseatic medals from Hamburg, Bremen and so on fell under the same ban. The Hindenburg Honour Cross was the state approved medal to erase all that came before it.

Fredrich August Cross Of Oldenburg, the Duchy Of Oldenburg's state equivalent to the Prussian (but nationally adopted Iron Cross), this case EKII equivalent; there was also an EKI equivalent.

Those are great. I got this set to go with my Baden Stahlhelm. 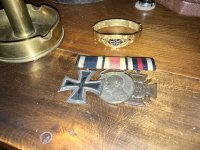