Staff member
I have had this busby for many years and have been told that it is a repro because of its liner and cords. Obviously, the cords are wrong and look to have been taken from an attila. Other members have directed me to a recent busby reference text which shows pictures of a similar liner. I believe, that at the very least this is an excellent repro with some original parts. Here are the photos which I am sure will generate some comments from members: 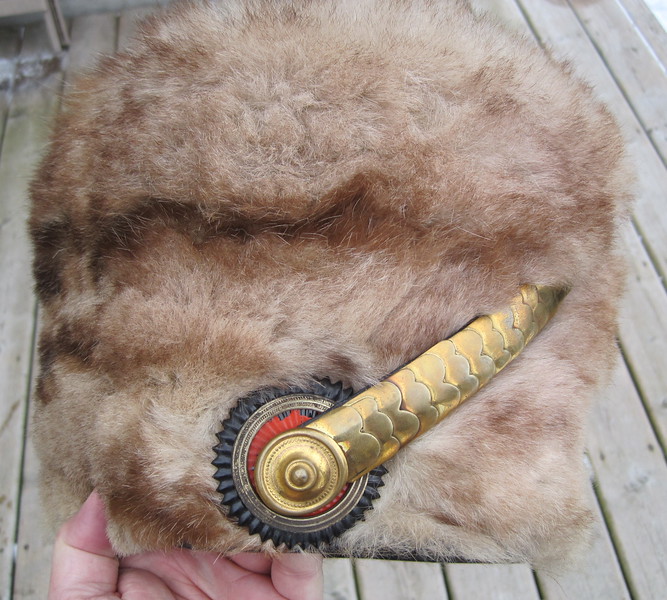 The flamme is slightly fade on the outside surface

Obviously this is not correct.

I took the wappen off years ago and it is held on by soldered split brads.

Over all, the piece is very well made, whoever made it knew what they were doing.
A

I'm not sure the fur is actually opossum on this- what do you feel? I think it is likely an old repro, but the skull looks very good to me and could be original...

Staff member
I am no expert on opossum either but it is real fur not synthetic and I believe that opossum come in slightly different colours. To me the chin scales and reichs kokarde are original beyond doubt. The feldzeichen looks to be original, the reservist cross is original quality, correct and not some cheap made in India thing. The liner is cut out properly (pointed tongues) but is dyed on both sides. The fang schnurr certainly is not correct. The lining is red satin. I am also impressed by the fact that the maker (see inside pic) reinforced the chin scale holes with a circular piece of leather and a washer. Perhaps this was made after the war?

Staff member
I was contacted privately today by a very experienced and knowledgeable member. He provided an expert analysis of this piece and has convinced me that it is a reproduction. The only things that appear to be original on this are the chin scales and Reich's kokarde. I have owned this piece for 25 years and bought it when I was a relatively beginner collector, i certainly did not know much about busbies. So, I scored with my 20th Hussar Saxon but I lost on this piece, such is collecting. I will be looking into changing the forum logo as I do not want to be using a repro to front this site.

Still, it serves as a testament to all that you have learned and helped fellow collectors to discover over the years.

I am sure these things happened to everyone here once. Its therefore great that this forum is around to get advice before buying a helmet.

Some times more may be learned from a defeat than from a victory. Still great looking piece.

Happens to all of us at least once I guess... and probably more than once because we won't always become aware. Somewhere in the late 1980's or early 1990's I bought something similar to the Prussian tschapka in the pic (not this actual one, but it's brother, sister or cousin). A few weeks later, on (much) closer inspection, I noticed that it was made of some kind of fiber that most certainly wasn't around in (pre)WW1 days. I called myself a few rude names, and then simply considered it a lesson.

Around the same time the exact opposite happened. I bought a "Napoleonic" tschapka (again not this actual one, but it's brother, sister or cousin and in not as good a condition), about which both the seller and myself were in severe doubt, in the end concluding that it was a replica made in 1913 for the Centennial of the Kingdom of the Netherlands.
Now lo and behold: after having had some real experts (experienced collectors and museum people) the common verdict was that this was a genuine Napoleonic piece.

So it can work both ways. First time it was my own neglect (out of happiness with the new acquisition) to examine the tschapka thoroughly before putting money on the table. Second time it simply turned out that I was a lucky bahstud.