Staff member
Things have been quite busy "haubewise" here. So, we have another member's helmet that needs some TLC. I want to thank all customers for their trusting me with their treasures. In this case, a very cool M15 tschapka in as new condition, never issued....probably a bond prize helmet. As many know, the weakness in the tschapka design is that front visor with it's chic fold over and hidden stitch line. It truly represents a design where style over came practicality. In order to "fold" the visor down into position the material has to be very thin. In this case, as usual we have a thin piece of visor sandwiched between black cloth and thin finished leather. The cloth and finished outer layer is what is stitched to the shell and holds it in place. Some photos: 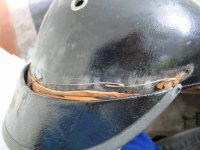 The 100+ year old thread has not rotted, I actually had to cut it in order to get the visor off. The problem is that this thread has pulled through the thin cloth and leather fold piece. 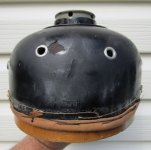 A clear photo showing how the leather liner is tack/running stitched to the front of the shell.....like new!! That section of missing finish will be filled in.

Not so nice here on the visor though! The black cloth inner visor lining and thin finished leather fold can be clearly seen. There were 5 stitches, all of which have pulled through the fold layers. The only way to fix this is to cut some thin leather patches, and glue them in so we have something to stitch to. 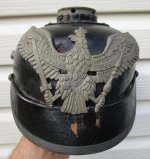 I got carried away and forgot to post the before pictures. 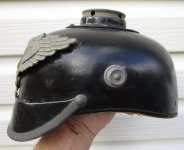 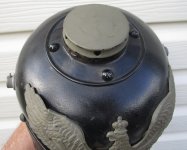 It is so rare that we see how things were 100+ years ago. 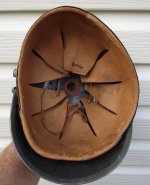 Staff member
Ah.... I haven’t started on it yet James

Brian
Where all tschapka finished with only a few stitches to hold the visor in place or was this a wartime shortcut?
Thanks
John

Staff member
In my experience John, this is how all of them are made and this is the 6th one that I have worked on. If you own a tschapka, take a look under the liner along the rim of the shell and you will see this stitch pattern.

Brian ;
A lot of these Garde Uhlans show up without the Garde Star.
Also was there a metal mortar board top with it ?
The inside is perfect !
A vey nice helmet
Steve

Staff member
Yes Steve, a metal mortar board but this was not sent for easier shipping. Correct, so many of these do not have the Garde star. I can’t remember when I have actually seen an M15 Ulan with star. The new old stock M15 Ulan plates that James and I bought at SOS 2018 had no star either. This is the first, never issued “bond helmet “ that I have ever worked on.

Staff member
So, I have been trying to finish this tschapka. Putting the visor on originally would have been easy, one hundred years later, not so much. Some photos of the process: 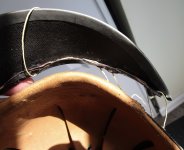 The thin leather patches have been glued in along the fold line and we are two stitches in. The thread used is unbleached linen which is used for book binding.....chemical free. As usual, I coat the thread with beeswax before and during the restitch. The visor has to be stitched loosely as shown and it flops around during the process....very annoying! You can also see how the thread must sit inside the fold. 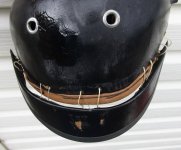 Finished!! However, obviously we can't leave things as they are. 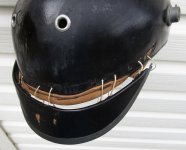 The linen thread has to be pulled stitch by stitch in order to cinch the visor back up to the shell. You work your way across while your wife or some other helpful person holds the shell. Your biggest fear is that this linen thread will break as you pull on it! It's new, not 100 years old, should not be a problem.......!!!!#$$! Now I have to start all over again. I do not recommend that anyone use linen thread for any restorations, as this is the second time this has happened. At least the first was not a tschapka!
Last edited: Sep 28, 2021

Cheer up and carry on

There are certainly modern threads that are better, but I admire your work precisely for this because you try to restore as original as possible.
P

Staff member
My wife and I finished this tschapka today, re stitching the visor for a second time using tougher vintage 100% cotton thread. She held the helmet while I fearfully cinched up the thread, praying for it not to break! The results: 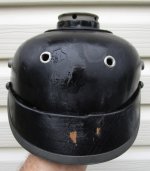 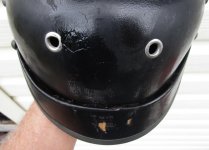 There is one small gap between shell and visor on the lefts side but this is the best that I can do after 100+ years. The shell has also probably shrunk a bit over the decades which is typical. I am leaving it up to the owner as to how to deal with the scuffs. The viusor is covered in thin finished leather, like a woman's purse, there is no shellac like on the shell. Consequently, if I blacken the scuffed area and then apply shellac, it will look different than the rest of the visor. I am still filling in the patch of missing finish as can be seen.

Brian ;
Here is one with the Garde Star on the front plate
Steve 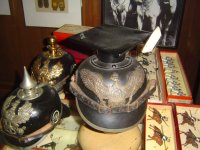 Thanks .I am not sure
The only negative thing is there is NO liner
well if something has to be missing
I guess I notice that the least
Steve
L

KAGGR#1 said:
Thanks .I am not sure
The only negative thing is there is NO liner
well if something has to be missing
I guess I notice that the least
Steve
Click to expand...

Shame about the liner, but still looks nice.

Staff member
Photos of the completed tschapka, I dealt with the visor scuffs. 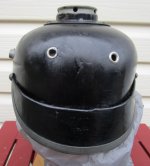 A bit better after some work. 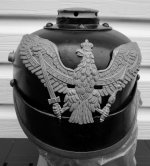