The Leib-Kürassier-Regiment, Großer Kurfürst, Schlesisches, Nr.1 (Breslau) was the oldest of all of the Prussian Heavy Cavalry, Kürassier, regiments having been formed in 1674. They adopted the Kürassier Metalhelm in 1843. The Model 1843 Kürassierhelm was massive and had the front visor attached to the the outside of the helmet shell. Also the chin scales were attached with knurled nuts on the outside and did not have a button and hook arrangement to fasten the chin scales together when not in use. Initially the thought was to have the front visor lift up, like the face of a medieval knights helmet, but this was never adopted, though experimental versions do exist.
This is a Model 1853/60 Kürassier Metalhelm: 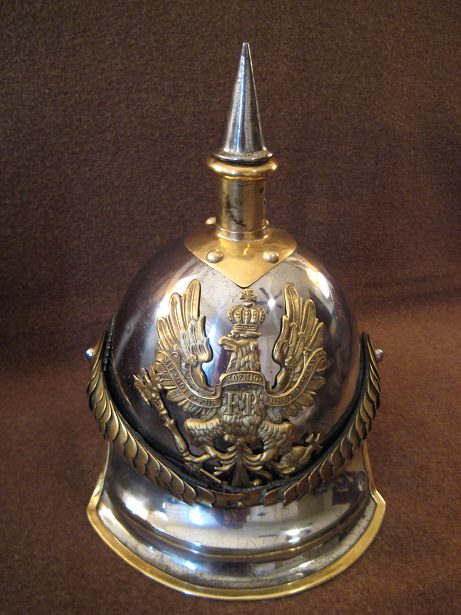 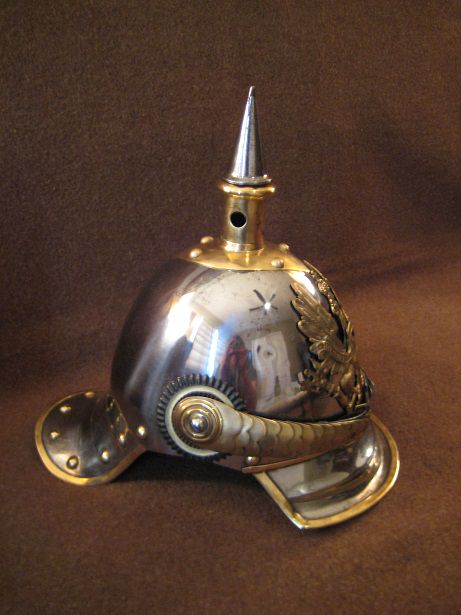 I did find that it could be quite difficult to photograph this type of helmet due to it's highly polished steel surface. The above photo is without flash. This is a flash version: 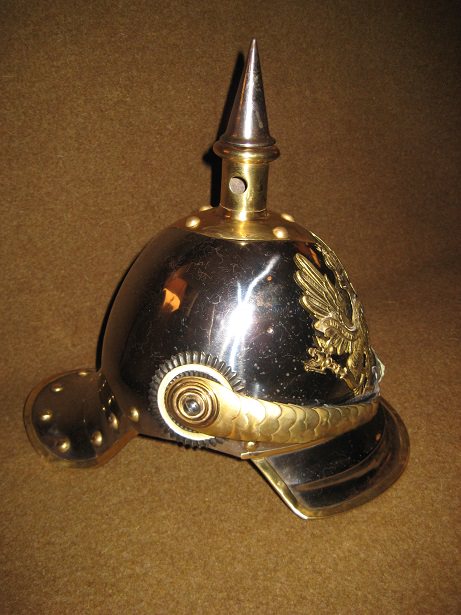 The chin scales are mounted with the 1853 style screw. The female is brass with a flat bottom and is not drilled all of the way through. Initially I thought this was improper until I reviewed the post on fasteners in this forum. The male is steel/iron with older thread. It is unusual in that the slots on the male are very thin, reminiscent of the officer's type. A knife blade fits the slot much better than any small screwdriver.

The Kokarde is stamped and seems appropriate in every way --- except size. Prior to 1860 the Kokarde size was 73mm. After 1860 the Kokarde was changed to 63mm. The Kokarde on this helmet measures 68mm --- exactly half way between the two specifications. That is enough to keep me awake at night for a couple of months.

Underneath the Kokarde is stamped a "2". It stands alone, no other marks, and I have no idea what it means. 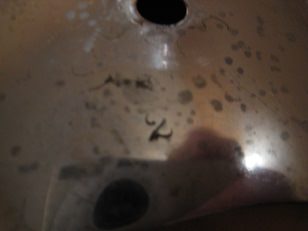 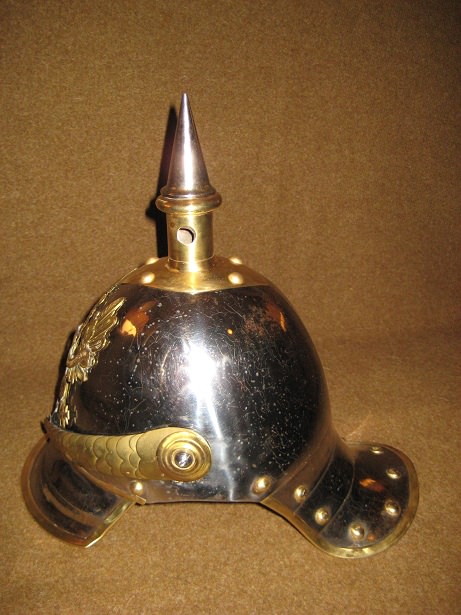 Markings are visible on the left side of the helmet, even with the chin scales attached. The markings are "K. 1. 2. 43." 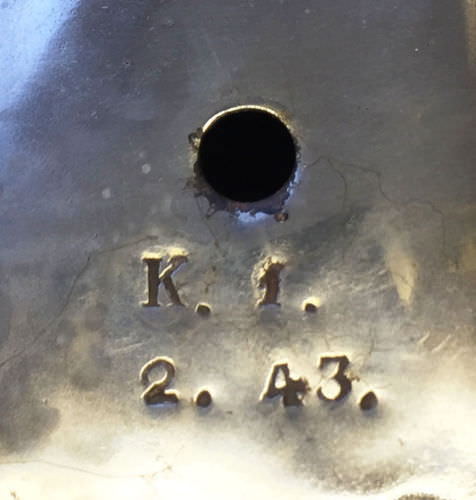 The Wappen is the older 1842 style which has been modified to meet 1860 regulations by soldering on the "Mit Gott für Koenig und Vaterland" bandeau: 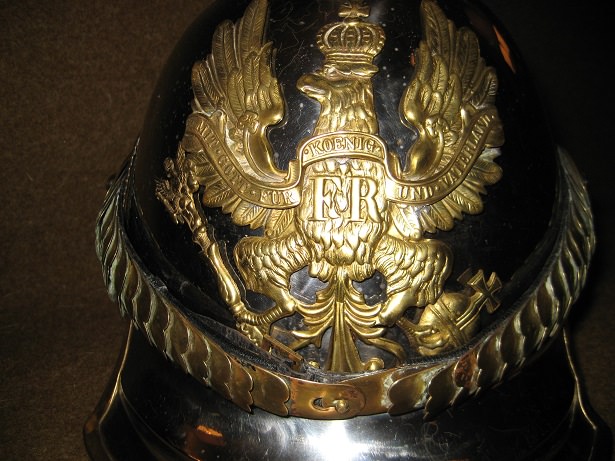 This unit adopted a special "Pro Gloria et Patria" Wappen in 1902, and the officer's wore specialized chin scales on their helmets.

The helmet shell has a small ridge on the back apparently to strengthen the shell: 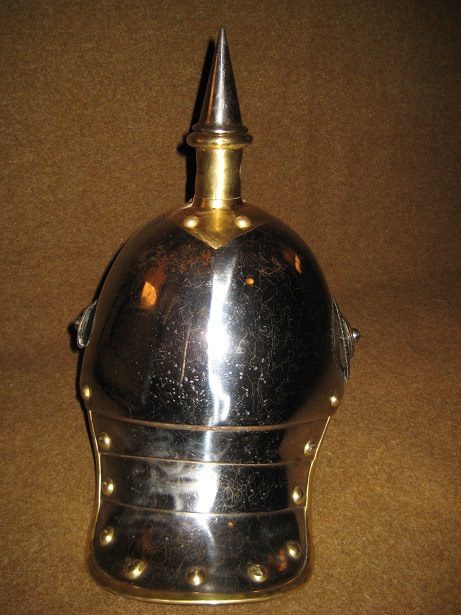 In 1862 another modification was made to these helmets by reducing the overall height and by altering the width of the brass trim from 8mm to 5mm. This helmet retains the Model 1853 8mm brass trim. 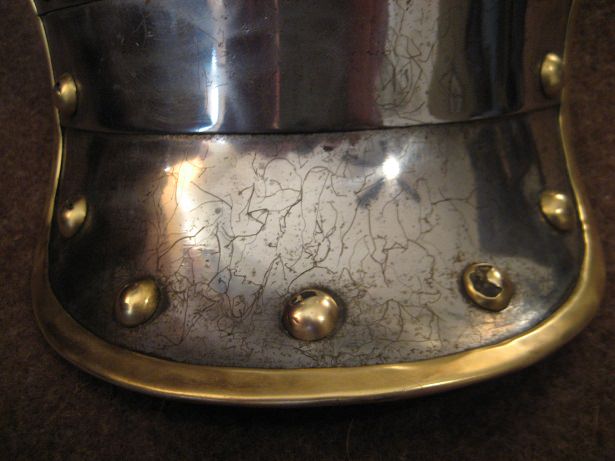 The liner of this helmet is attached to the shell by small rivet/pins fore and aft, and by the female attachment fittings for the chin scales on the sides. 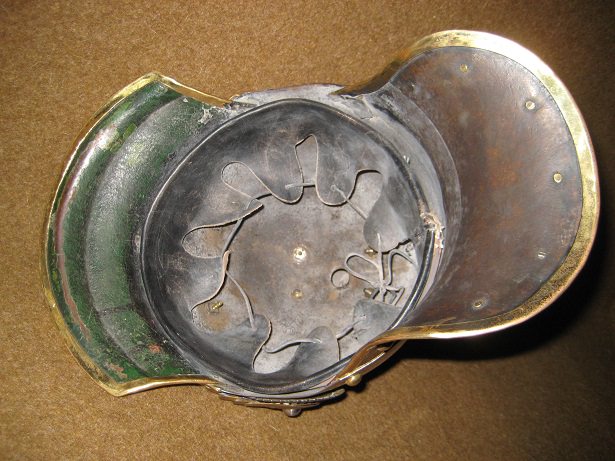 This helmet is quite heavy and is massive in comparison to it's younger relative: 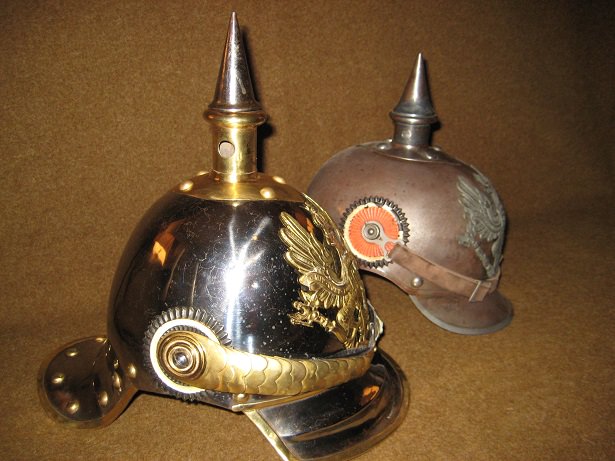 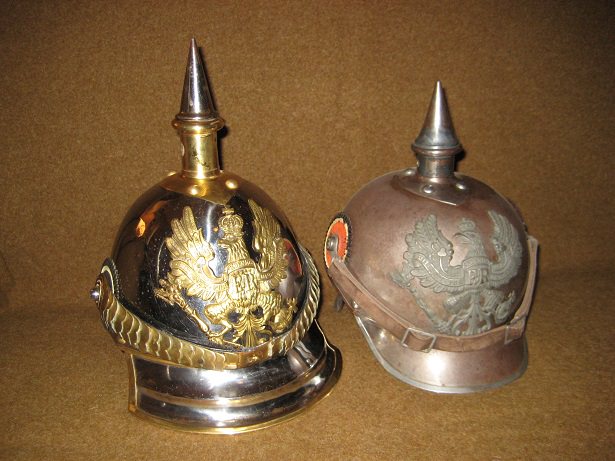 A very good website for Kürassier information is here: http://www.kuerassierregimenter.de/index.php

Beautiful piece, thanks for posting, I know little about these older helmets.

Wonderful Helmet and thank you for your detailled explanation. Great job :bravo:

I wanted to add a couple of profile photos to show the "inverted football" shape of this helmet. Later modifications reduced the height and eliminated most of this rounded shape on the top of the dome. 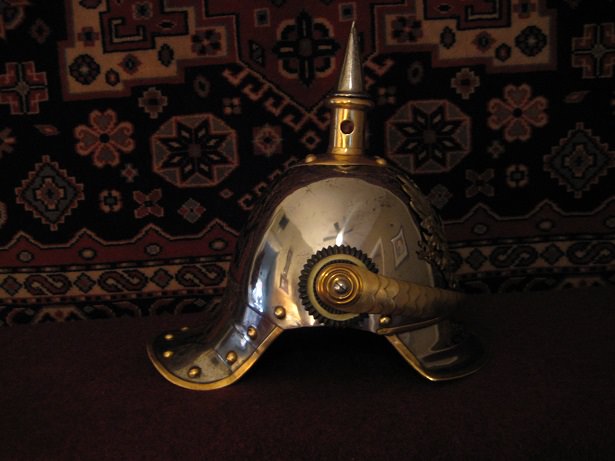 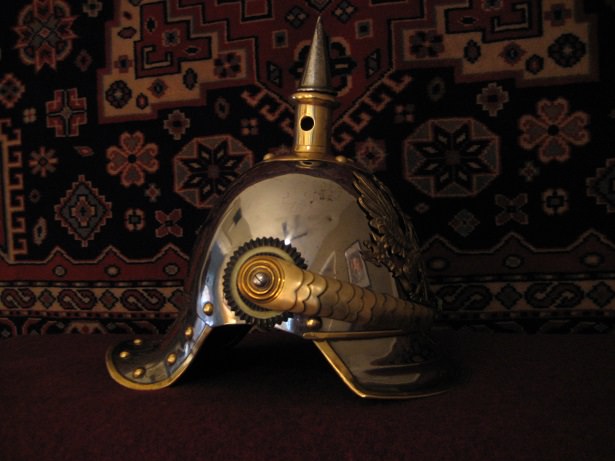 Thanks for the comments.

Staff member
Jee-ZUZ is that gorgeous!

Who needs a mirror to shave in? Use that.

Wow John a Dream helmet to be sure.

Thanks for the comments guys!
I have to admit that I expected more feedback on this one than I got.
I have noticed that sometimes the older ones don't seem to spark much interest.

I have to admit that i like seeing these older helmets, but that i know nothing about them. In the past i've owned some of those older helmets but they were exchanged quickly for some ww1 helmets which fitted my collection.