More than 250 pictures of Uhlans, here : 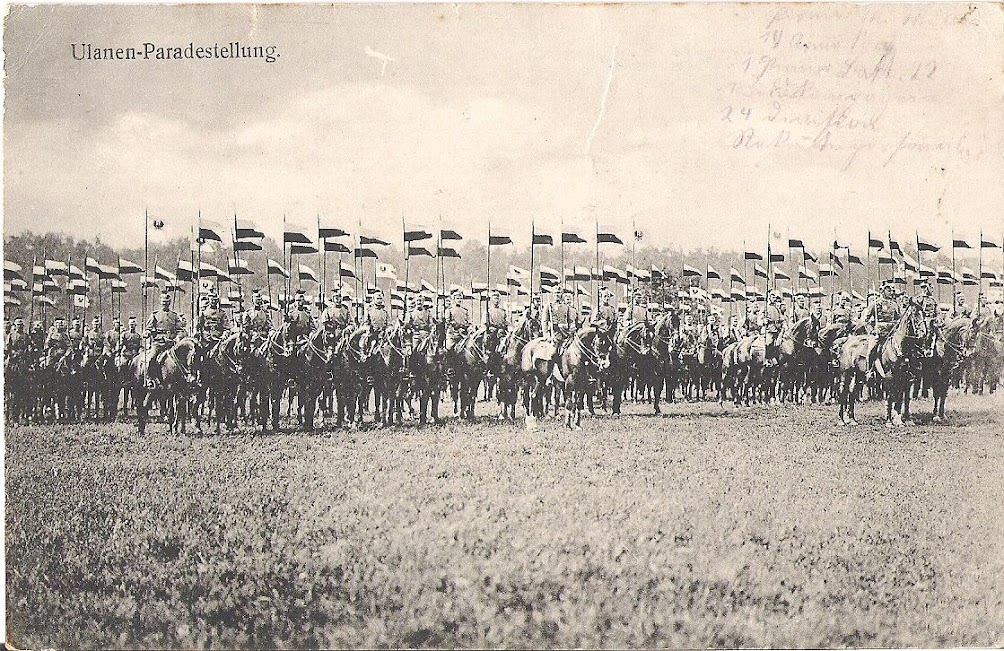 Thanks for sharing, many years ago I was able to interview an Uhlan. In 1916 his whole troop was transferred to the artillery as team drivers.

Staff member
That makes total sense....no use for death and glory lancers in the high tech WW1 killing machine. Must have been quite depressing though for those guys to be transferred into "horse transport". Thanks for the link Max!

Although he was unhappy about the transfer he did recognize that he more than likely saved his life. He was very proud to have been an Ülan.
9

I spent a long time watching these pictures, Maxime. Great!! Many thanks.
Bruno

You've got a really nice picture of bavarian Uhlans, congratulations!
9

De rien, Maxime.
I do not know much about guns. I can see that one of the standing uhlans, on this picture, bears a P08. But, out of curiosity, what are these small pistols at the belt of some of the seated men, notably #2 from right? I often see these short handguns on period pictures, notably of uhlans. Can somebody explain to me?

Thank you for sharing your photograph collection of Ulans! There are two or three images that look like that date from the 1890's where the enlisted soldier is wearing what appears to be his Tschapka cords looped and across his chest. Is there a name for this practice, and when would the cord be worn like this? Thanks. Joe

Having silenced the French artillery, neutralized the French cavalry, and panicked the French infantry, von Bredow's brigade managed to extricate itself and withdrew to their own lines. Of the 800 horsemen who had started out, only 420 returned.[1] Among the wounded from the 12th Brigade was Lieutenant Herbert von Bismarck, son of the Prussian chancellor Otto von Bismarck
G

Perhaps it was not allowed by the official regulations. I keep on searching!
Click to expand...