On a recent outing I found a M'15 Tschapka with an Überzug (although I've had a couple Tschapkas I've alway want a M'15 with the cover). The best part it fits me. The helmet does have a maker's stamp but it is not legible, just too faded. I can not find any other markings on the helmet. The cover also has a makers stamp;
"Emil Fablan
Berlin C 1914
56 mm."
The cover is also stamped 'UR3". Being that this is M'15 helmet and the cover is dated 1914, doubt they started out together.
The Wappen is a Guard Eagle, but missing the star, looking closely it would appear that it may never had had a star. I've seen a few of these Wappen (on helmets) missing the star, I'm wondering if they may have been issued without them.
Has the original draw string in the lining, but missing chin strap and cockade, as well as the Feldzeichen . There is no toggle on the top for the cords, but there is a hole for it. It also has the holes for the Rabbat. 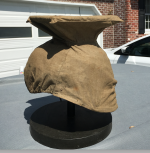 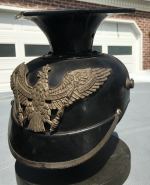 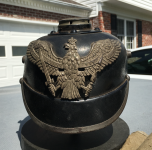 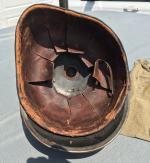 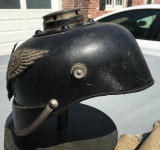 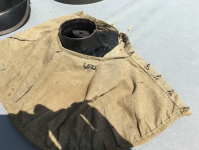 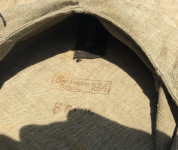 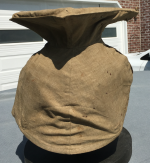 Staff member
That is a very cool find, congratulations! :thumb up:

In Randy T's book he has a printed flyer that was given out showing spikes and an garde uhlan without the star.
They had hundreds of them.
You see more m-15 without the star than with.
I was lucky to win one off of ebay about 25 years ago and have NEVER seen one since.

pickelhauben said:
In Randy T's book he has a printed flyer that was given out showing spikes and an garde uhlan without the star.
They had hundreds of them.
You see more m-15 without the star than with.
Click to expand...

If they all had had stars - you would think stars without eagles would show up more often.

I forgot to add the flyers were for bonds.

how come when I go outing, I don't find any pickelhaube or even the cover alone or .....well just my luck I guess LOL

Amybellars said:
how come when I go outing, I don't find any pickelhaube or even the cover alone or .....well just my luck I guess LOL
Click to expand...

Maybe if your locale cemetery had one of these: 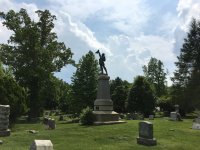 Hmm, sad to say the scare space in Singapore doesn't have cemeteries. (The Malay muslims do have but not for other races) If you insist the bodies to be buried, then you buy a lease for 15 years where bodies are put on a conveying belt and buried underground and then once the belt reached the timeline of 15 years, the next-of-kin has to claim the body for cremation. If you refuse to claim the body, govt will take possession of it and then cremated it and scatter the ash into the sea.

So I don't even have many local cemeteries to go for haube hunting. LOL

Staff member
I have been able to pick up 2 silver M95 spare stars over the years but have never seen an M15 star for sale. The situation in Canada is the same....numerous Ulan M15’s without stars. I also have that War Bond helmet advertisement courtesy of Randy T. One other point, I don’t remember ever seeing a Garde M15 infantry helmet missing it’s star.

In the years that I've been collecting, I've only found one M'15 star and that was for the larger foot eagle. I have a smaller star (in silver), but it is one a Württemberg Wappen. I still haven't figured out what it is suppose to be?

Under closer examination my gray star is the standard infantry larger size.

Is it possible that these plates were NEVER issued with a star ?

I have seen modern pics with uhlans having the large star.

I'm not going to say never, but I'm beginning to think that a good many of them did not have the star. On Col.J's site, his article about M'15 plats, he does show a star on a UR13 plate, but the only other spread eagle plate he shows is missing the star. He list the Guard Eagle with Star in grey finish as UNDOCUMENTED.
http://pickelhauben.net/m15-steel-helmet-plates/

I have 4 garde eagle uhlan and one of them have a small star where patina and holes match perfectly. The other one has a wrong star and of course the other two have no stars. I have stars on its own but they don't fit the uhlan garde eagle.