Staff member
Due to various requests, the Historical reenactment Forum is now open. If there are problems let me know, as we had issues last time with posting Replies.

Here is my favourite reenactment photo. Please note the ferocious young German Fallschirmjäger in the center. I suspect a Ju-52 would struggle to get off the ground with more than two of these warriors.....

When I said there were pros and cons to posting photos, this was one of the cons.

Thanks for that... funniest thing I've heard in days.

Looks like it would take a couple cargo chutes to get him safely to the ground! :lol: Airborne!!!
B

I thought Sergeant Schultz was a fictional character

badener said:
I thought Sergeant Schultz was a fictional character
Click to expand...

Looks like he volunteered for Fallschirmjaeger duty on the Russian front!! LOL! It looks like the Waffen-SS recruiting standards have slipped a bit as well.

Perhaps the forum should be limited to WWI reenactment photos to keep in line with the Pickelhaube theme?

pebceb said:
Perhaps the forum should be limited to WWI reenactment photos to keep in line with the Pickelhaube theme?
Click to expand...

Maybe so, but I did get a good laugh out of the pic .

So I for one think it should stay and other reenactor pics ( WW 1 and WW 2 )should fallow .

These are the types of groups that seem to do a good job WWI reenacting:

I found the IR 28 one when I was looking for stuff on the original owner of my first pickelhaube.

Staff member
I think the main thing to concentrate on is that the reenactor community does share our love of History in general. I used a Napoleonic Hussar reenactor on many occaisions during my teaching career. He had a magnificent 7th Saxe Hussar uniform which he had custom made in Fr. This along with the entire Hussar kit... boots, sabers, saddle, shako, busby, repro flintlock pistols etc. He did 2 one hour lectures with a 15 min. break in between. I would have him strut around the halls at lunch time kissing the hands of the school secretaries. He played the part very well and it was good PR for my Department. Even the French reenactors accepted him and he participated in their summer reenactments for many years. I know he was also part of the French cavalry at the 2015 Waterloo Bicentenary.
I taught American History to the Grade 11's, many times. One year, I got the 10th Louisiana along with some of their Northern friends to set up a camp on our football field. We had the kids sworn in and given attestation papers. They were formed into squads and moved from one demonstration/presentation to the next. They were issued wooden cut out muskets courtesy of our wood shop and drilled by Sgts. on our field. Lots of fun! As Department Leader, I could get away with this kind of stuff. There is no way it would happen today.

Perhaps the stout Fallschirmjäger is related to this actual WW2 German soldier as the resemblance is quite remarkable! 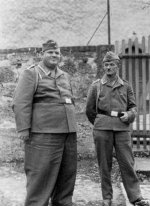 Brian is spot on about re-enactors sharing our love of history. I worked as a curator for a National Museum for 15 years and, when our Lecture Theatre was built, was asked to construct a lecture/show on the Samurai of the Age of Wars. I took it a step further and went for audience participation with a selected volunteer coming on stage to dress in a (repro) Samurai armour with the aid of two helpers while telling the audience about the different components and their purpose. After that, explaining the historical events of the time was a done deal - you already had everyone's full attention. That 'show' was intended to run twice a week for three months - it eventually ran for ten years with some eager people coming back time after time hoping to be picked as the volunteer! We could be fooled into thinking that history is now an overlooked subject among modern people but believe me, there IS a genuine interest among a lot of people out there - you just have to make it easy for them to access it.
Steve
You must log in or register to reply here.
Share:
Facebook Twitter Reddit Pinterest Tumblr WhatsApp Email Share Link
Top