This stein was purchased by Reservist Schäfer who served in the 5th Battery of the 1st Baden Field Artillery Regiment "Grand Duke" Nr.14 from 1909 to 1910. The regiment was garrisoned at Karlsruhe.

This one is a hard to find example as it commemorates service in two units during Reservist Schäfer’s two years of reserve training as he also attended the artillery school at Jüterbog as a member of the schools’ 6th Training Battery.

This is a typical late pre-war style stein as steins became more sophisticated and produced in higher volumes. This example has an ornate lid cast in four sections and incorporates a replica artillery fuse which can be “set” and is removable. The finial depicts an older generation (pre-recoilless) artillery piece. The thumblift is a Prussian eagle perched on a globe which was inset with coloured glass beads only one of which has survived. The owner has attached three small tokens to the eagles’ beak. In addition to a tiny artillery round, there is a very finely detailed gilt veterans association medal with the inscription “Loyal to the regiment - Always ready”, plus an Iron Cross with a Roman numeral III and the initials H and N on the obverse and 1886 on the reverse. No idea what this means. These tokens would have been added in the post war period.

This artillery stein also incorporates an artillery shell “driving band” as part of the stein body.

Staff member
Amazing detail and intricate design, that piece is just over the top! Awesome !

Staff member
Steve you say there is a red Baden FAR 14 strap on the handle?

I like Tony did not see the FAR 14 strap .
Thanks
Nice stein
Steve 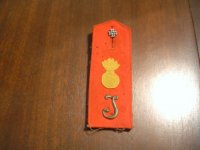 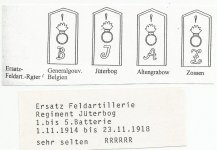 The strap is directly under the handle below where it meets the body of the stein. You can just see the edge of it in the photo. I have a clearer shot of it but I think I was under the impression that I was limited in the number of photos I could post. Maybe thinking of another forum.

I'll post it later today. A bit pressed for time at the moment.

The missing picture of the shoulder strap as promised.

Obtained this superb Baden FAR from my friend Brian Loree. One of my favourite FAR helmets https://www.kaisersbunker.com/dunkelblau/helmets/dbh84.htm 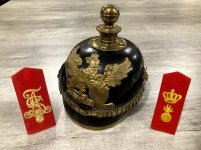