It has been so long since I've contributed to the forum, I thought I should get my sea legs back. Photobucket has changed dramatically in the interim, so we'll see whether this Luddite can adapt to the times.

The infamous straight-pull Canadian Ross rifle appears to be undergoing a reevaluation at present — at least there are are number of YouTube videos that suggest as much — and I had been wanting to get my hands on a specimen for some time. The rifle I purchased recently is quite decent: a small, hairline crack in the hand guard and a missing stack swivel appear to be the only debits. Furthermore, the M-10 retains its original sling, which is something one would be hard-pressed to replace. The barrel and action are fouled with cosmoline and will require a thorough cleaning. Though strong and supple, the sling was heavily mildewed in places, and this received my immediate attention. It was cleaned with Carr & Day & Martin Belvoir Tack Cleaner, which contains an anti-fungal to inhibit mold and mildew. Spray-on, wipe clean with cotton terry, and buff with a horsehair brush — I repeated the drill three times until I was satisfied the microbes had been vanquished. Anyway, here she is:

Manufactured in 1916, This Mk III is the end result of all the modifications required to make the rifle safe and effective. It just wasn't meant to be… 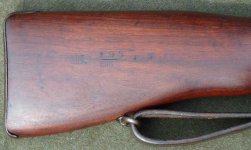 The bolt is case hardened (one can see the old cosmoline on the rear sight):

The breech and (undented) magazine: 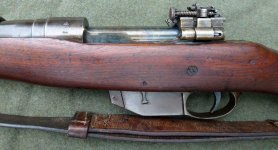 Finally, the sling dated 1916. It is secured to the lower band swivel by a simple hide lace string knotted in a figure eight:

Nice rifle and sling :thumb up: did the Canadian forces used this type of rifle on the western front ?
O

Good to see you back Chas. Nice Ross, the military models are scarce in presentable condition. I've always kept an eye out for one but they always seem to go for a little more than I want to pay. I do have an M-10 sporting Ross in .280, a very beautiful rifle. Maybe someday I'll work up the courage to shoot it.

I have had a few of these over the years including a US issued one. Many years (45) ago I had the pleasure to meet a gentleman, who was the Ross Fire Arms Company. He had purchased all the records and name of the company, including the records of the legal cases against Ross. He had a large collection of the Ross Rifles and bayonets.

Westfront said:
Nice rifle and sling :thumb up: did the Canadian forces used this type of rifle on the western front ?
Click to expand...

The following provides some historical background on the ill-fated Ross:

ottodog8 said:
I do have an M-10 sporting Ross in .280, a very beautiful rifle. Maybe someday I'll work up the courage to shoot it.
Click to expand...

From what I've read, a lot of the problems with the Ross could have been eliminated had the rifles utilized the .280 Ross cartridge as intended. The bolt design, the heft of the barrel, everything was engineered for that specific round, not the .303 British. The rifle has quality written all over it, and, when in proper battery, the straight pull action is like glass.

Have you seen the bolt tutorials on YouTube? They should help you find that courage.

I haven't fired the 08/15 yet. Perhaps, I'm saving that experience for your first visit.
W

Westfront said:
Nice rifle and sling :thumb up: did the Canadian forces used this type of rifle on the western front ?
Click to expand...

The following provides some historical background on the ill-fated Ross:

Thanks very interesting :thumb up:

I reviewed the papers from the court cases that involved the bolt blowing out of the rifle. From what was concluded was that there were two ways to reassemble the bolt, which would allow it to be placed back into the weapon. In one of the methods only the corners of the locking ears would engage. This resulted in the corners breaking and the bolt blowing out the back when the piece was fired. The other method was the correct one. The court recorders also included drawings of the wounds this blow back had caused on the firer, they were not pleasant.
The general finding was that the weapon was a very good one, but not soldier proof.

Very interesting information regarding the litigation, aicusv. Thank you. Incorrect assembly of the bolt would serve up a hard lesson, indeed.

Staff member
Good to have you back Chas and great to see you maintaining a connection with the Canadian roots of your family. Congrats on an excellent piece, I have never seen one with an original sling before let alone one clearly marked to a Peterborough company. For the rest of our members, this town is east of Toronto and would have been a typical small centre surrounded by farms. Regarding the Ross, ammunition size was part of the problem, in addition to length and weight of the weapon. Period accounts from CN soldiers also mention the need to keep it clean in order to get it to work properly, hard to do in the mud of the trenches. The Ross first saw action in Canadian hands, during the first gas attack at Ypres April 1915. It did not fair well under intense battlefield conditions and CN soldiers who could grabbed Lee Enfields during the battle, which of course did not jam do to the Brit ammo. After great political wrangling in CN the Ross was eventually replaced with the Enfield. The Ross had been touted before the war as an all CN weapon, a superior product and thus, to have it denigrated did not sit well. The Ross however, continued service with Canada's sniper teams on the Western Front, now equipped with Scopes until the end of the war. It became a deadly sniper rifle in the hands of expert marksmen, many of whom were of course "Native Cdns". One of the most famous of these Natives was Henry Northwest (MM with Bar) with 115 confirmed kills using the Ross. Unfortunately, he himself was sniped in 1918.
Last edited: Sep 29, 2021

Nicest Ross I've ever seen - a much (incorrectly) maligned rifle.

In attempting to restore photos once hosted by (ugh) Photobucket, the Ross images just happened to be handy. Unfortunately, I am unable to delete the old and irrelevant file extensions in the initial post. By way of giving this a bump, the only news to report is that I acquired a Canadian Model 1905/1910 "Mark II" Ross Rifle Bayonet not long after purchasing the rifle.

The sundry proofs and property stamps on steel, wood, and leather: 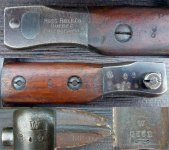 Staff member
Congratulations Chas on this bayonet, which of course is a perfect example with excellent markings. Complete examples such as this one are getting more rare up here in the North. Many have lost their scabbards or had the blade modified for civilian use. Good to have you back with us.

A wonderful piece of Canadian military history. I had one many years ago but never fired it.

Having published a history of the 21st Battalion (Eastern Ontario) in 2008 and now in the finishing stages of the 5th Battalion (Western Cavalry) I collected some anecdotes from the soldiers who used the Ross at 2nd Ypres (5th Battalion) and St. Eloi craters (21st Battalion). It was a highly political issue particularly in the case of the 21st as their O.C. at the time was William St. Pierre Hughes, Sir Sam's younger brother.

Both battalion's sniper sections continued to use the Ross to a large degree in some instances (if the stories are credible) equipped with German optics.

Thanks for posting this.
R

Very nice Ross Charles. If you do not have a copy of A Rifleman Went to War by H.W. McBride it is a very interesting work with a lot of information about the Ross rifle. the book is available from Amazon.

Herbert Wesley McBride was an original member of the 21st Battalion by way of the 38th Battalion.

I wrote an separate chapter dealing with Mr. McBride. He was what some people would call "a colourful character".

His anecdotes concerning life in the 21st machine gun section and his sniping adventures are interesting and make for good reading but his service career contains some elements of "gilding the lilly". For instance, in the book he is pictured as a Captain in the 21st but he never held a commissioned rank while with the 21st and was never a Captain in the C.E.F. although he did serve as a Lieut. with the 18th Battalion.

Staff member
Been a while since I have seen a nice Ross. Well spotted Chas. You do have an eye for quality.

Mine also has the original sling. Unless it's on the rifle, it would be impossible to find. 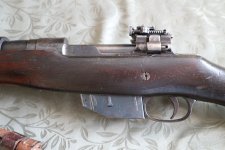 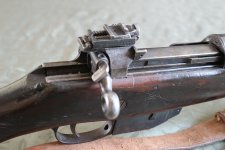 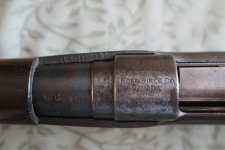 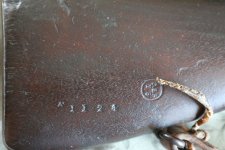 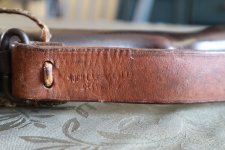 Staff member
Long out of print but a good reference on an obscure rifle. 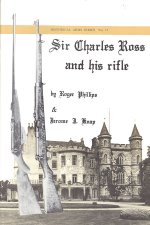