Staff member
I recently picked up this buckle marked 20.H.4.1. The description in the listing stated buckle from HR 20. As I have an OR busby from that regiment I bought the buckle. As you will see the item is infantry style not mounted troops. However, HR 20 fought as dismounted troops during the war (thanks Tony!) so this would explain the issue of this infantry style buckle to an H Regiment. I am not a buckle collector....I bought "the markings" so any comments/expertise would be much appreciated. The piece seems a bit smaller than normal and measures approx. 6.3 cm X 4.9 cm. The prongs and bar they are soldered to are steel. 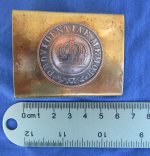 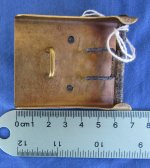 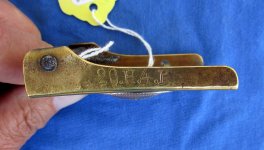 Staff member
Here are the German reference pages that Tony used to track down the information that HR 20 did serve as dismounted troops in the Trenches. Perhaps we can get a brief translation from one of our German members?

Staff member
Thanks John, it wasn't cheap but I couldn't pass on those markings. Here is the busby again: 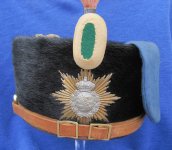 It makes a nice set!

Staff member
I will give it a go. I’m sure I’ve made grammatical mistakes but I think I’ve gotten most of it. I think I should mention that when any Cavalry Regiment was used as infantry, they were equipped as infantry.

After the mobilization, the Regiment moved west into the field on August 7, 1914. It became (part of?) the 1st Kgl. Saxon. 23rd Infantry Division and marched through Luxemburg to the Meuse and then to the Marne. The Regiment received its first enemy contact at Dinant. It was used in the cavalry reconnaissance and patrol service. On September 9, 1914, the Regiment received the order to withdraw from the Marne. This came completely surprising and had a devastating effect after the Regiment's successes in the days before. The Regiment was transferred to the Aisne. This ended its cavalry combat mission. The Husaren were now used in trench warfare and in the rear. In October-November 1914 the regiment was hit by a typhus epidemic. Numerous members of the Regiment succumbed to the disease.

The operational areas were the Somme, Champagne, Siegfriedstellung and Flanders. The Husaren were used in trench warfare, on scouting patrols and in sending messages to higher HQ.

The 2nd Squadron was relocated to the east in June 1917 and deployed in Galicia, western Russia and then in Ukraine until the end of the war.

After the armistice in November 1918, the squadrons returned to Bautzen individually by the end of January 1919.

The traditions of the Regiment was later taken over by the 2nd Squadron of Cavalry Regiment No. 12 in Grossenhain.

Excellent historical run down Tony.
Thanks.

Staff member
I appreciate that John but like everything else, it’s not my knowledge. It’s having good reference books.

Staff member
Thank you Tony, that took a lot of work obviously, greatly appreciated. That certainly explains why an infantry buckle would have 20th Hussar markings.
L

Hi Brian,
I hope I’m wrong but neither the type of holes on the back, the lack of solder nor the regimental markings look correct to me, and especially with these rare buckles you have to be suspicious.
Regards, Lars
A

I also wonder about the coppery finish showing through on the roundel, which looks a lot like what we see on repro 'galvano' plates and other parts. I would have expected the roundel to be solid white metal, not plated...

Arran said:
I also wonder about the coppery finish showing through on the roundel, which looks a lot like what we see on repro 'galvano' plates and other parts. I would have expected the roundel to be solid white metal, not plated...
Click to expand...

When Brian asked for my opinion, I couldn’t give him one, as I have very little experience with buckles, and suggested he post it here as there are some very knowledgeable buckle collectors on this Forum. It would be very helpful if some images of originals could be posted so he can make a decision.
L

Far from being a "very knowledgeable buckle collector", I do have some experience with trying to differentiate between the originals and the reproductions / fakes. Below a cut-out from a recent Ebay offer (I hope this falls within the "fair use" definition); note the differences:
My conclusion: too many things that need to be explained 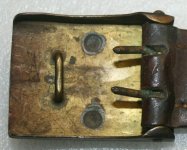