Seeking Opinions on this Officer Helmet

I have been looking at this helmet for about ten days now. It has been re-listed on Ebay at least once.
I am very interested, but I would like other opinions. 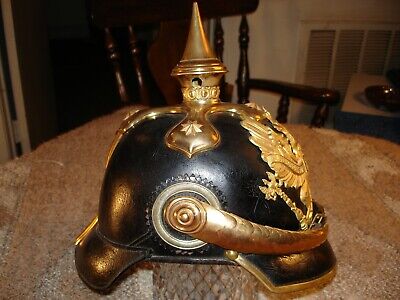 It is advertised as Infantry, but I believe that it is Train because of the curved chinscales. The spike does not unscrew; not uncommon unless it was marked to a unit that rated a Haarbusch. It has a leather Kokarde, also common on 1860's.
What do you think?

I too have been watching this one, and like Tony think the price is to high.

Also, a big big concern for me is the seller has 0 feedback, could be ok, but a risk.

Staff member
Well John, the Wappen is a very nice M1860 and I see nothing to indicate the helmet is earlier. So in my opinion the chinscales would reflect the 1857 regulations. So I vote Train. It's very nice. You don't often see a good M1860 officer.
C

A beautiful officer's helmet. Nothing crippling. Indeed, jugular with domed scales, therefore Train. Fixed point, normal, the Line train does not receive the Busch until 1867. In this state, it is worth this price ( Weitze-Price) Cordially
Last edited: Jul 15, 2021

CLOVIS 57 said:
A beautiful officer's helmet. Nothing crippling. Indeed, jugular with domed scales, therefore Train. Fixed point, normal, the Line train does not receive the Busch until 1867. In this state, it is worth this price ( Weitze-Price) Cordially
Click to expand...

Clovis 57,
Could I get the name of your source saying that the Haarbusch was not worn by Train Battalions until 1867?
Does this source also state which Train Battalions were authorized to wear it?
Thanks, 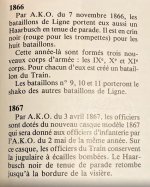 Yes. Thanks Tony. I don't speak French but my wife does. Here's the translation:

1866
By A.K.O. of November 7, 1866, the Line battalions also wear a haarbusch in parade gear. It is in black horsehair (red for the trumpets) for the eight battalions. This year three new corps were formed: the IX, X, and XI corps. For each of them is created a Battalion of the Train.
Battalions no. 9, 10, and 11 will wear the shako of the other Line battalions.
1867
By A.K.O. of April 3, 1867, the officers were equipped with the new model 1867 helmet which was given to infantry officers by the A.K.O. May 2 of the same year. On this helmet, the Train officers keep the chinstrap with combined scales. The black parade dress Haarbusch falls to the edge of the visor.

Officers wore Pickelhauben but enlisted wore Tschakos until 1903. It sounds like all Train Battalions were authorized a Haarbusch after 1867, but none were authorized before that.

This helmet has a new home.

SkipperJohn said:
This helmet has a new home.

I hope the new home is yours, John. This is a top quality helmet, and a rare one. Price is right, too.

Yes. I made an offer and he accepted it.

Thanks for your responses and your help.
I'll write another post on this soon.