On 11 July 1915, the SMS Konigsberg was scuttled in the Rufiji River, German East Africa during the engagement known as the Battle of Rufiji Delta. In 1924 the salvage rights were purchased for the princely sum of £200 and all non-ferrous scrap was removed from the wreck.
This is where my grandfather comes into the story .
During the 1920s he dealt in antiques and curios in London and during that time he obtained two brass frames, purporting to be from the Captain’s cabin of the Konigsberg. They are about 26cm by 35cm and pretty heavy duty brass. 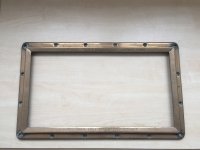 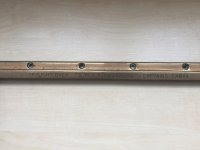 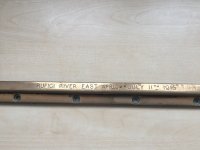 Amazingly these have been handed down through my family for nearly 100 years. Thought you might be interested

Very nice. I‘ve always had a soft spot for relics from ships. Neat to hold a piece with known history in your hands. At one time I had an extensive collection of relics from the USS Maine.

I've always been amazed by the story of the guns of The Konigsberg. They would have made a movie about that if the feat of moving the guns across the continent had been accomplished by one of the Allies.
You must log in or register to reply here.
Share:
Facebook Twitter Reddit Pinterest Tumblr WhatsApp Email Share Link
Top