Soldiers Bedding Down In French House In 1915 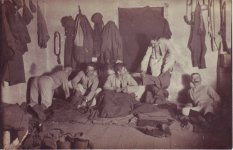 Never seen a postcard like this before, seen plenty of Dugouts pictures and trench pictures but this actually bedding down in a damaged French house. It kind of matched the mental picture I had from reading Storm Of Steel, The Kaisers Reluctant Conscript, We Are The Western Front etc

Its always exciting when the next lot of cards arrive, I know I sell them but I only ever buy for me. I really must keep a few more

Staff member
Interesting, had to be in use for awhile.....lots of convenient hooks on walls for gear, and lots of gear being hung. I don’t remember reading that slippers were ever army issue?

Hi all I'm back it seems I caught Covid when I went for my booster jab, I guess that is irony

The important stuff slippers were a luxury ordered from home and only worn in rest areas, thus far the only reference I can find to slippers being worn is in:

Fighting the Kaisers war:The Saxons in Flanders 1914/1918 by Andrew Lucas and Jurgen Schmieschek on page 226 has a photograph of RIR 244 in a rest area with a Saxon NCO smoking a pipe and wearing slippers which is anontated as "rare and unoffical privelege of rank"

Staff member
Well Nick, you got me to buy another one!

Very sorry to hear of your covid experience.

I’m sorry to hear that you had Covid too, Nick. Hope it was a light course of diseas. Get well soon

Thank you so much guys for the concern it on the way out I didn't realise i had it, the last two jabs kicked my ass and took my name

so I asumed at first that this was the side effects of the booster, after 4 days the doctor took a swab and there I was in isolation. Worst thing was the exhaustion, slept a lot, then my sense of smell and taste went to hell in a handcart, T Bone steak tasted weird, even Wild Turkey smelt strange, this passed and after day 6 I followed my wifes advice and had some "retail therapy",, which meant I bought some great items for my collection, including a rare private purchase cut out Gold wound badge and some other things, will post some pictures really pleased. Still feel tired but my appetite is back and I now test negative.

b.loree said:
Well Nick, you got me to buy another one!

Very sorry to hear of your covid experience.

As you mentioned the food problems here are some soldiers collecting what looks to be stinging nettles:

I can't exactly remember if it was in the Reluctant Conscript, We Are the Western frront, We Attacked at Twiglight or Here The Fields Bleed that I read about this. As the food shortages worsened so the German Army was presented with more and more meat free days. By 1917 there were three meat free days per week. The soups served from Ghoulashkanonen were there thing and reedy, they also sometimes contained dried vergetables, known universally as "barbed wire". Any local edible vegetables were pounced on and added to soup, as were any living creatures, behind the lines in Belgium where the locals always kept chickens, rabbits, cattle, sheep and pigs there were just empty hutches and barns. Any horses killed by shell fire or bullets if the field kitchen didn't spot it, then the local soldiers would have stripped it clean.

The soldiers in the picture were a trench rading party of some local fame, sadly most of them didn't make the end of the war; this picture came from an album that was put together during the war, these are best as their is an implied history from the soldier who put it together during the war.
Wives and family also put albums together, it can be quite upsetting I had one album that had in it regularly monthly patriotic children based postcards sent to his wife, there were four or five a year from April 1915 - August 1918 then they stop, there were a couple of other postcards and that was it. Its not rocket science to work out how that ended 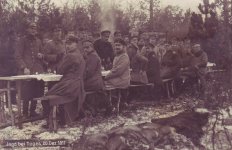 Had to share this with you, as you can see from the date its the last Christmas of the war, in the trenches the soldiers are starving, Dominic Richert in Galica is shooting wild cats (not quite sure how much would be left after being hit with 197gr 8x57 round) as he is so hungry. Back in Germany a lot of the population are reduced to subsistence living hunting for potatoes or anything edlible. Most cats and dogs have vanised from the streets, yet the Imperial German Officer Corps are living it up like lords; the ordinary soldiers disliked the officers, not uncommon in armies, but this was seething resentment about the massive differences in pay, medals etc.