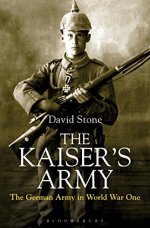 As reference book I could not have survived in the early days of militaria business without this book, it is also a good read.

Of course it is expensive, as all good books are have it in both in Hardback and Kindle versions.

Just received mine. Can’t wait to read it. Update - Oops - it is the Kaiser's Reluctant Conscript that I just received. Now I'll have to look for this one!

Thanks for mentioning it.

Staff member
I am going to order that one, thanks for the heads up. I am on my second reading of the Kaiser's Reluctant Conscript.

b.loree said:
I am going to order that one, thanks for the heads up. I am on my second reading of the Kaiser's Reluctant Conscript.
Click to expand...

I am so pleased you thinks its a good book, he must have a an interesting person to meet, I just loved the way he wouldn't take part if he thought it was too risky!

Staff member
Probably why he survived so many battles on both fronts! I also like the account of where his helmet spike is damaged by either a bullet or shrapnel during a fight on the Eastern Front. Very revealing also to read a first hand account of just how starved for food the German Army was by 1918.


This is the damaged cross/calvary on the battlefield, this cross features on many German postcards in many different cards from patriotic idealised images to the actual photographs

The sight of the damaged calvary was profundly disturbing to Richert and other soldiers, he found as disturbing as the sight of a French and German soldier who had bayonted each other at the same time and has sunk to the ground attached to each other in death.

In 1915 Richert and his unit were opposite some Indian soldiers who had a sense of humour, one morning there were six rifles missing from the position

The Germans had this strange habit of leaving their rifles in position while they were in dugouts, why anyone would not have their weapon immediately to hand in a combat zone is a mystery to me!

Staff member
Thanks for posting those Nick! I also appreciate how Richert the hardened veteran and an NCO by 1917 tried to protect his “boys “ , the young members of his MG squad. All and all, an excellent read.