The Order of the Black Eagle Today

There have been discussions concerning the wearing and awarding of orders by former ruling houses. Some believe the orders ceased to exist upon the overthrow of the monarchy, others believe that if it's a house order, as opposed to a governmental order, then the order belongs to the house itself and they're free to do what they want. I've seen photos of the head of the ducal house of Saxe-Coburg-Gotha and his son wearing the Saxe Ernestine Order, the head of the ducal house of Anhalt wearing the Order of Albert the Bear. Well, today I had a new experience, the first time I've seen someone, other than in antique photos or postcards, wearing the Prussian Order of the Black Eagle. This photo was taken at the recent wedding of Prince Albert II of Monaco and shows the head of the imperial house of Germany and royal house of Prussia, George Friedrich Prinz von Preussen, along with his future bride, Sophie Prinzessin von Isenburg. Georg Friedrich is the grand master of the Order of the Black Eagle. He appears to be wearing two breast stars, but I can't see what they are, one is probably the Black Eagle.

Great points Mike, I'd not really thought about this before... is that a PLM on his sash? Or maybe I'm just imagining more medals everywhere now there's the possibility...

chrispaulodale said:
Great points Mike, I'd not really thought about this before... is that a PLM on his sash? Or maybe I'm just imagining more medals everywhere now there's the possibility...

No, Chris, that's the cross of the Order of the Black Eagle on his sash. It looks a bit like the PLM, but there's a a gold center medalion with FR in script, no writing on the blue enamel arms of the cross, and the eagles between the arms of the cross are black instead of gold.

Oh, and by the way, I saw a photo posted on another forum where you can clearly see the two breast stars he's wearing. One is for the Order of the Black Eagle, the other is for the Royal Hohenzollern House Order.

Thanks for the correction and extra info Mike... let's see more photos here of modern royals with medals....

chrispaulodale said:
Thanks for the correction and extra info Mike... let's see more photos here of modern royals with medals....

I'm not sure how many I can find, Chris, but here's one of Hubertus Prinz von Saxe-Coburg-Gotha wearing the grand cross cordon of the Saxe-Ernestine House Order. You can't see the medal, since it hanging on his hip, but you can see the cordon quite well.

Charles Prince of Bourbon-Two Sicilies with his wife Princess Camilla. I'm not sure of all the miniatures he's wearing but I'm sure he's wearing the Order of St. Januarius and Constantinian St. George

Archduke Georg von Habsburg of Austria, wearing a miniature of the Order of the Golden Fleece

One more........one of the two pretenders to the royal throne of France, Louis Alphonse de Bourbon, Duke of Anjou, called Louis XX by some, at a private audience with Pope Benedict. Prince Louis is wearing the ancient French royal order of the Order of the Holy Spirit.

Thanks for those Mike, very good to see the old orders still in use. I wonder if they ever award the orders to anyone else still? It seems a bit odd to have a medal that you only award to your children then they to theirs...

chrispaulodale said:
...It seems a bit odd to have a medal that you only award to your children then they to theirs...

That's why they're called house orders, they're only awarded to members of the house! Seriously, though I did see a photo a while back where someone from the house of Saxe-Coburg-Gotha got married and nearly all of the male attendants at the wedding were wearing a miniature medal on the green edged purple ribbon of the Saxe-Ernestine House Order. Now, it's possible all of those men were members of the family, but I doubt it, I think they were household friends/servants or whatever.

Some former ruling houses do award their household orders. Some do it for money, others do it to reward some type of service. Others still only keep it in the family. The Austrian imperial house of Habsburg still awards the Golden Fleece, but it's very, very limited to only the highest levels of nobility.

I have a couple some friends who have rendered some type of assistance or service to the current head of the royal house of Portugal and he made them knight commanders of the Order of the Immaculate Conception of Vila Viçosa. I met a fellow once who had a German order, I think from Lippe, that had been awarded by the prince for some service or another. I myself have to imperial Ethiopian orders.

Thanks again for the information... how did you get Ethiopian awards? Amazing!

chrispaulodale said:
Thanks again for the information... how did you get Ethiopian awards? Amazing!

For many years I have been active in an organization here called The American College of Heraldry, we're a private corporation that assists individuals who wish to assume arms in designing their arms and we register them. Once a year we publish a volume with all the registrations in it. The late president of the college, Dr. David Pittman Johnson, was a close acquaintance of the chairman of the Ethiopian Crown Council, HIH Prince Ermias Sahle-Selassie Haile-Selassie, who lives here in the States. Because of their relationship, Dr. Johnson was allowed several years ago to nominate someone for an Ethiopian honor as a reward for service to the college. I was made a commander of the Order of the Star for my service "to the arts". Several years ago the Society of St. George of Lalibella, a charity run by the Crown Council, and the American College of Heraldry, held a joint meeting in Charleston, SC. I assisted with the meeting and some time later was shocked to receive a brevet in the mail making me a knight of the Order of the Ethiopian Lion for volunteering at the meeting. Although I've worn my miniatures on some occasions, I've only worn the Order of the Star neck badge once, at the meeting in Charleston. It's rather large!

That's really great, Mike. Or should we be calling you Sir?

chrispaulodale said:
That's really great, Mike. Or should we be calling you Sir?

Please don't I'm not really sure how impressive it is, I just happened to know a very, very nice gentleman who nominated me for something. I was totally caught by surprise! David Johnson was one fo the nicest men I've ever known who is, unfortunately, no longer with us.

The Johanniterorden is still awarded today under German federal law. The head of the order is Prinz Oskar von Preussen, though German citizens must obtain permission from the federal president to wear the decoration (always granted!). The order operates a nationwide ambulance and rescue service and numerous healthcare facilities. Interestingly, there are over a hundred Johanniter in North America, along with thousands from the related Order of Malta and the British Order of St John.

Another dynastic order still awarded, and often to "just folks", is the Order of the Gryphon (Greiforden) under the authority of the current Duke of Mecklenburg. Continued membership is dependent on payment of an annual "oblation" to support the charitable works of the order. Both Mecklenburg lines are now represented by Duke Borwin; he is the undisputed head of the house, but probably no longer a dynast as he descends from a morganatic line.

Internationally, the ICOC has attempted to validate orders of chivalry (http://www.icocregister.org/" onclick="window.open(this.href);return false. However, they have no legal authority, though their imprimatur certainly lends social cachet to the orders they approve of.

Does this mean I get to wear the Polish Order of the White Eagle? Man, that would spiff up my dress blues! :wink: 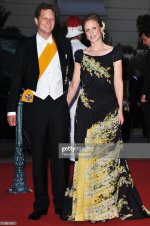