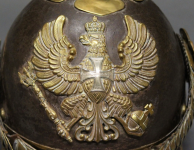 Sandy!
That is a very interesting Wappen. Because the Landwehr Infanterie rolled over to the Tschako in 1860 I was confident that no issued M1860 Line eagle Wappen with a Landwehr cross existed. However, I had not even considered the Landwehr Kavallerie.

And look at that. They both look like M1860 eagles to me. Three bumps on the elbows, gap between legs and wings not cut out, vertical tail feathers...

“The Landwehr cavalry is completely reorganized by the A.K.O. of April 29, 1852. From now on, in the event of conflict, each active cavalry regiment will set up its Landwehr regiment of four squadrons (Sound familiar?).

Kürassier
The eight regiments of Landwehr not being equipped with the Kuraß, they are called: “Schweres-Reserve-Reiter-Regiment”, that is to say: Regiments of heavy cavalry of reserve.

They take the place of the old cavalry regiments of Landwehr n° 1, 2, 7, 10, 13, 20, 25 and 26. Their helmet is that of the Kürassier, in polished steel for the eight regiments. The plate is the “Linien Adler” in brass with Landwehr cross in white metal."

So it is clear that issued M1860 Line eagle Wappen with a Landwehr cross were actually made. For the eight Landwehr Schweres-Reserve-Reiter-Regiment!

I’m happy to help
I also thought this topic was done after your really great researched information about the Landwehr-Plates in the entries before. But it was still in my mind when I saw this helmet, and I did not know if the eagles of the leather and metal helmets were the same.
A very challenging topic

garlanj said:
Tony, looking at your picture of the line officer got me to wondering.
This is a plate I got years ago which I always thought had either been 'messed' with or was a copy (or possibly both) as it had both the bandeau and the cross.
View attachment 19844

It looks good from the front but is noticably heavier than my other wappen and the back doesnt look like a stamping, although it doesnt look galvano either.

Just thought I'd see what everyone thinks.

Jeremy,
I am skeptical that your reserve Wappen with bandeaux is original. Granted, it is very difficult to make an accurate determination based upon a photo, but I see some issues that I have only seen in copies.
You stated that this Wappen was heavier than other Wappens you own so I assume that this is an early 1860's Wappen made of a heavier gauge brass. It is true that Wappens made of the heavier gauge may not be as sharply detailed on the reverse side, but most of the time they are very close.
I have taken the liberty of copying your photos.
This is the reverse side of yours: 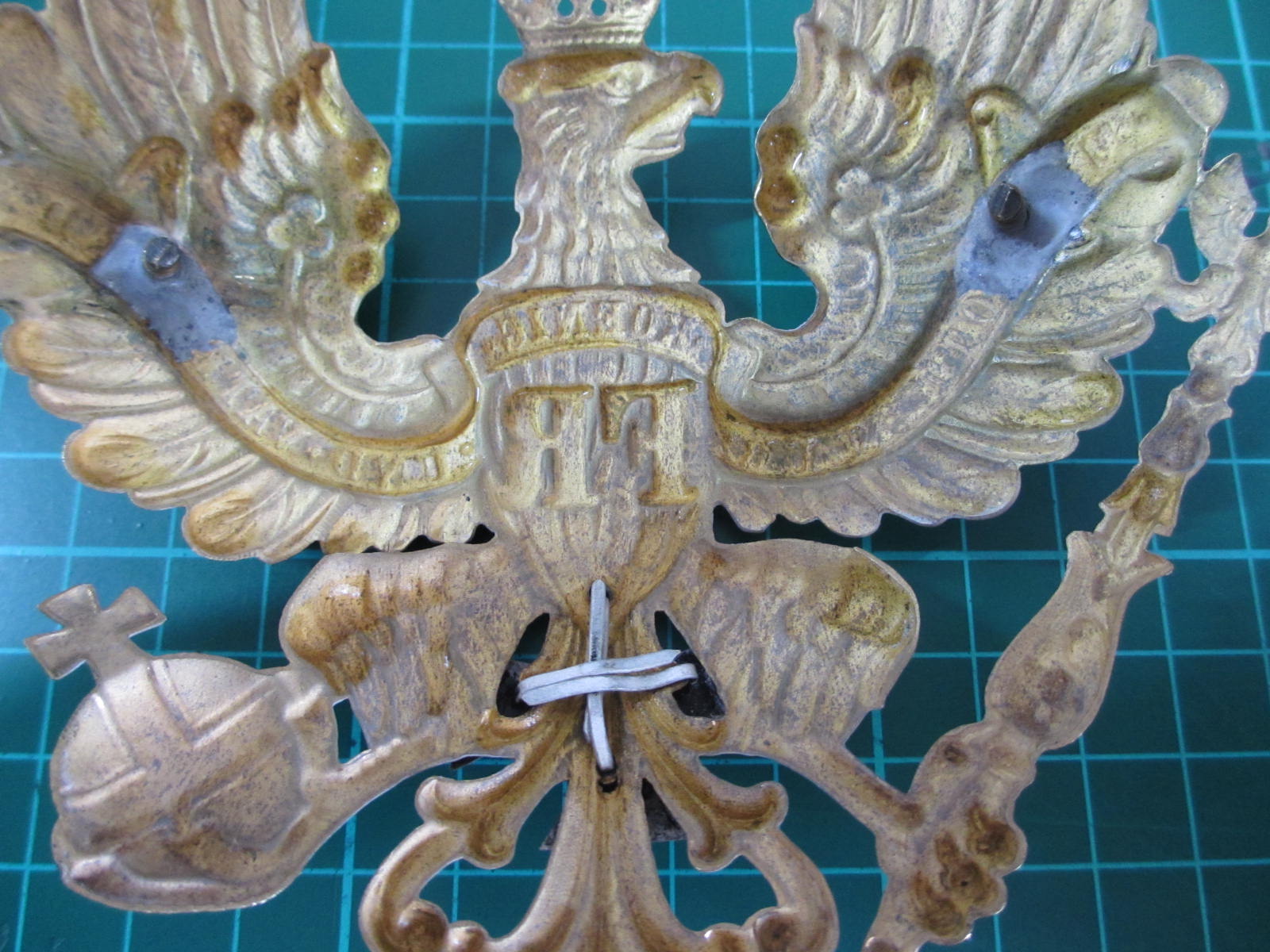 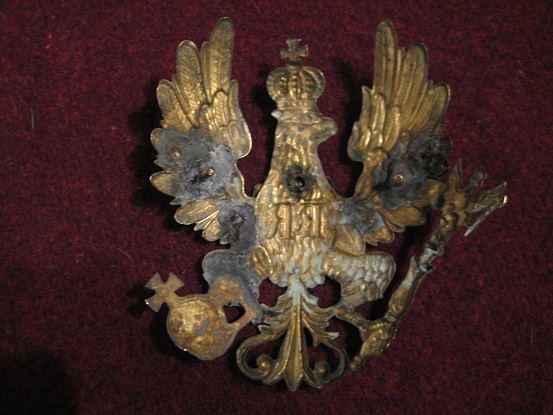 This is made from a very thick gauge of brass.

Here is the reverse side of an early model 1860 Wappen with stamped bandeaux: 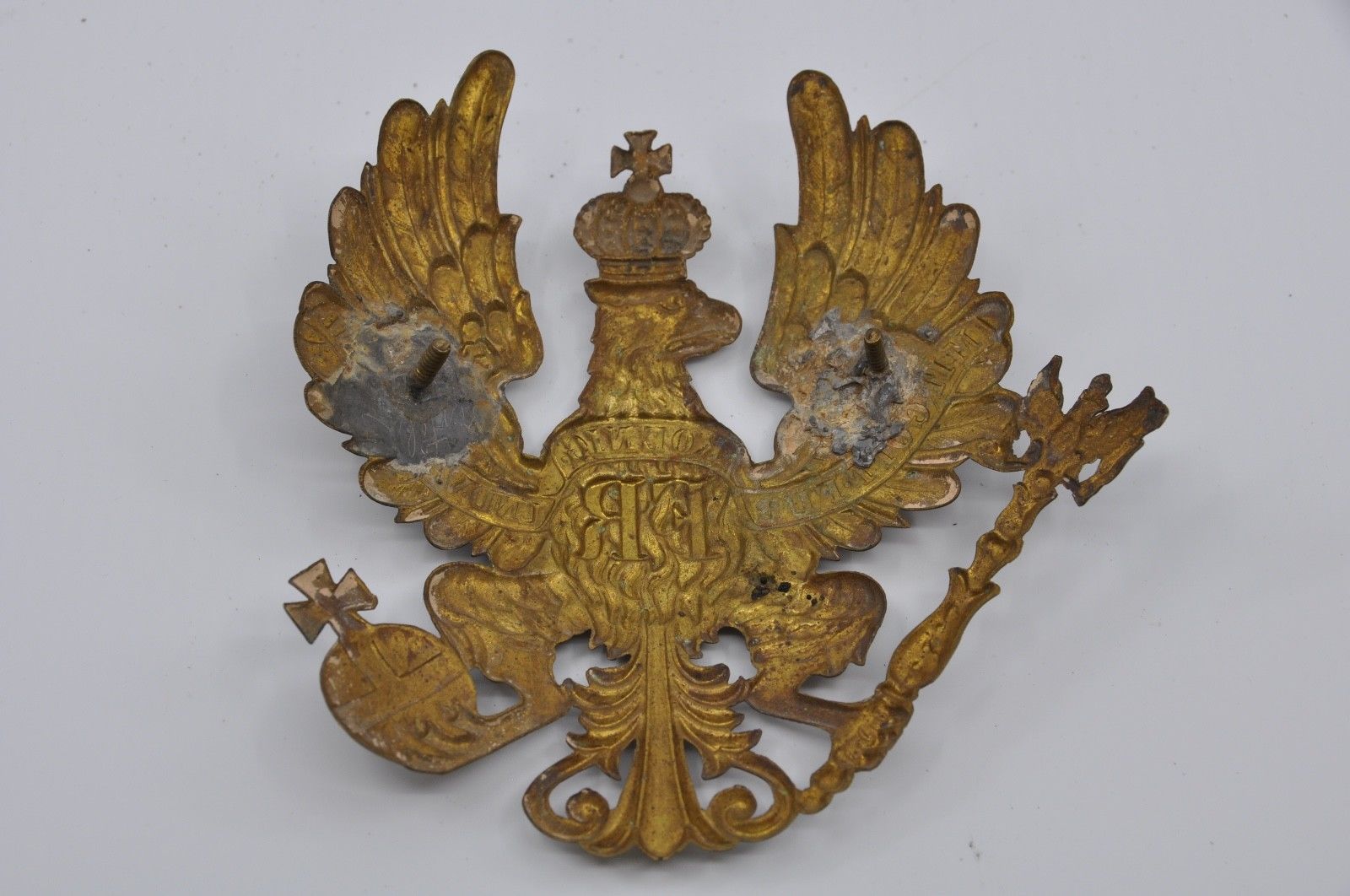 This Wappen is also made of a thick gauge brass, but notice, all of the words are readable and somewhat clear.

The most noticeable issue I have with your Wappen is seen from the front, not the reverse. 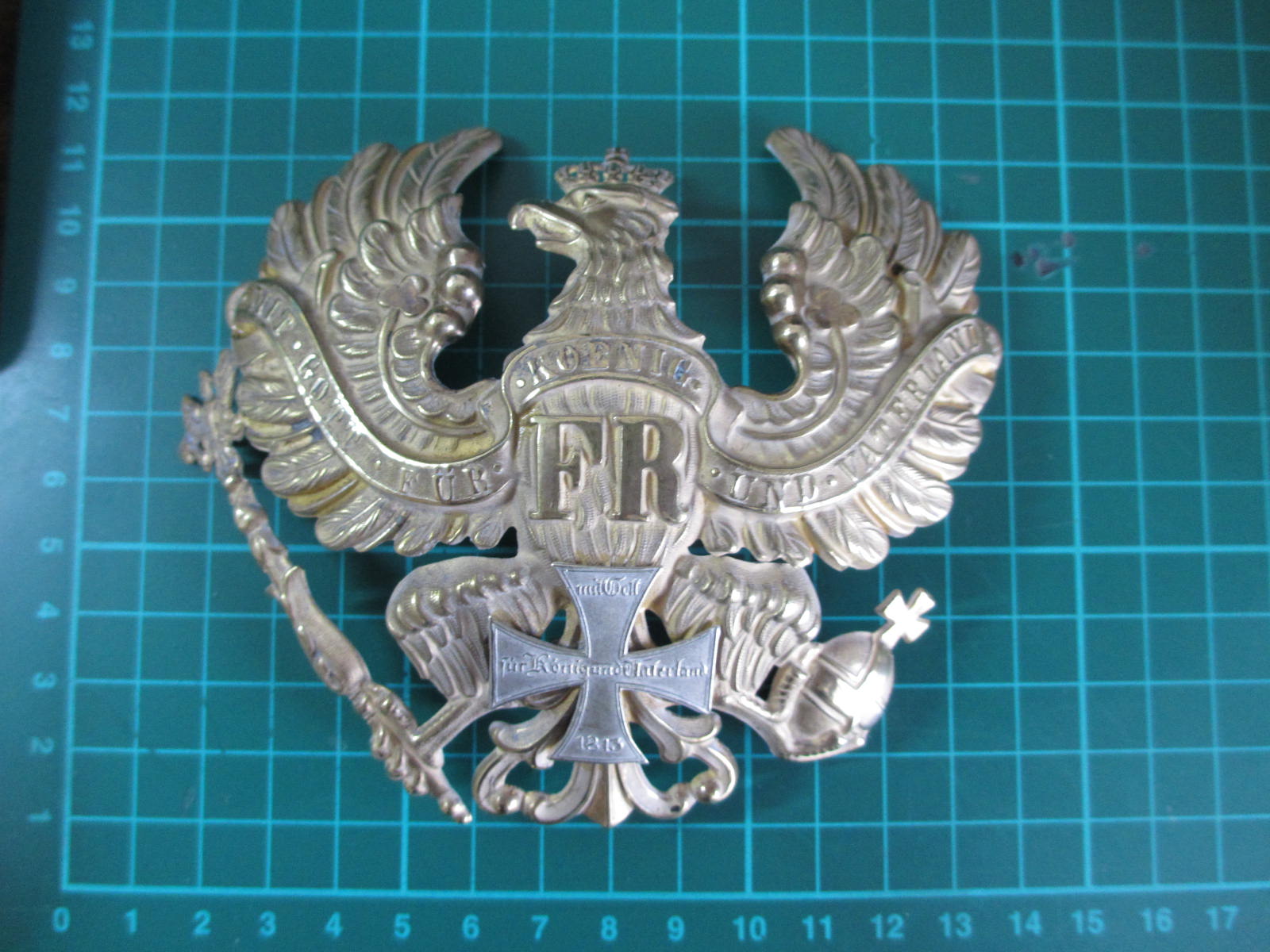 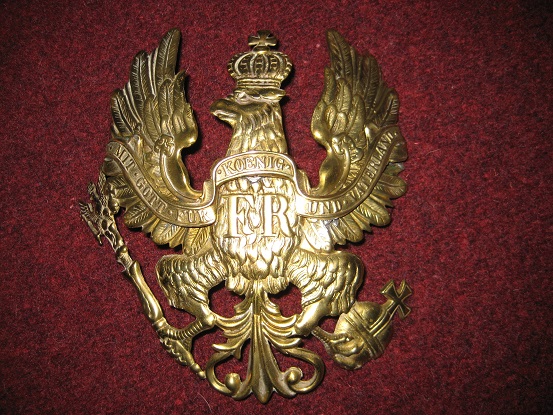 and compare to early M1860 with stamped bandeaux: 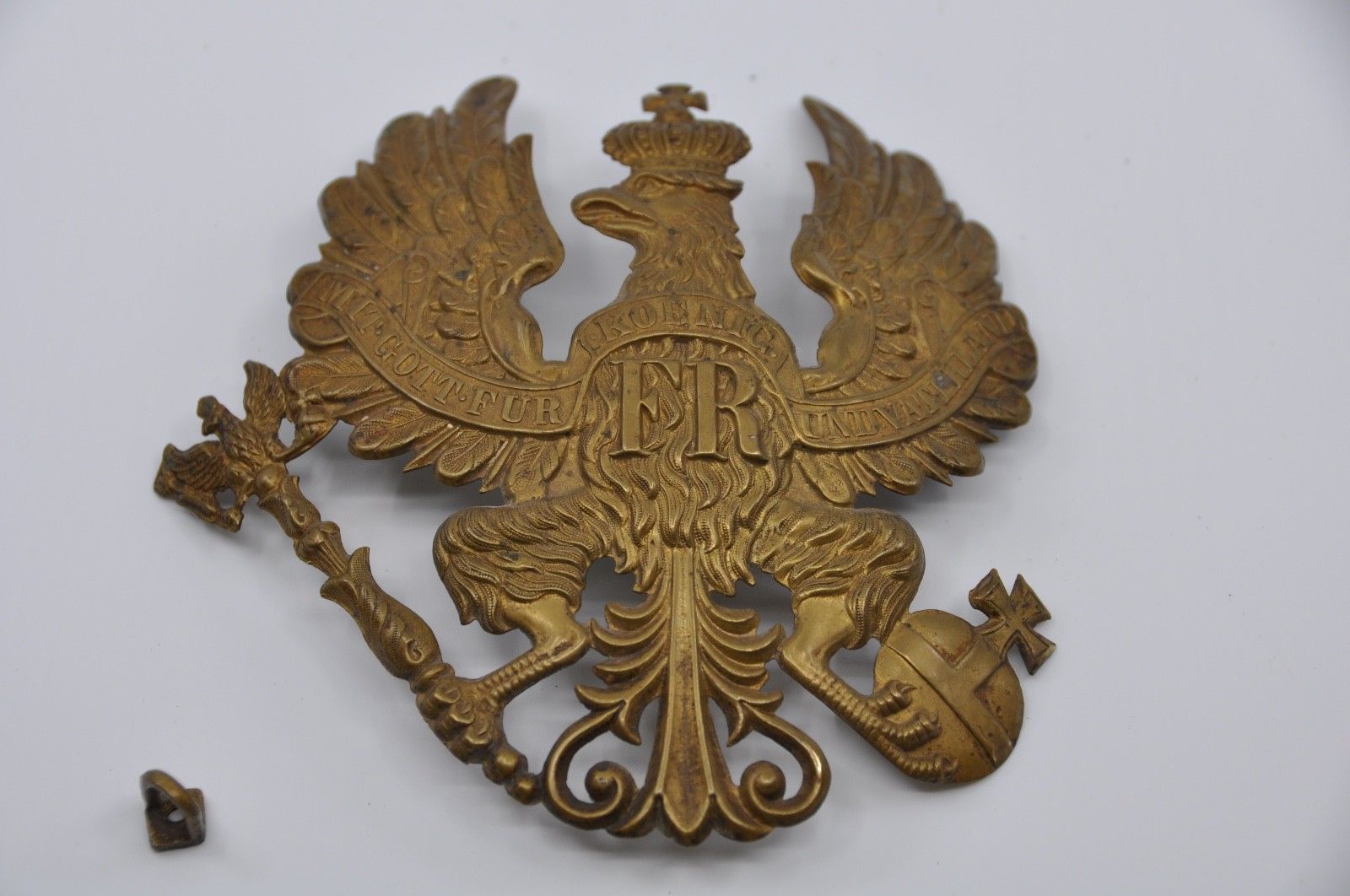 The bandeaux of your Wappen seems off center. The word "FÜR" is the most noticeable: 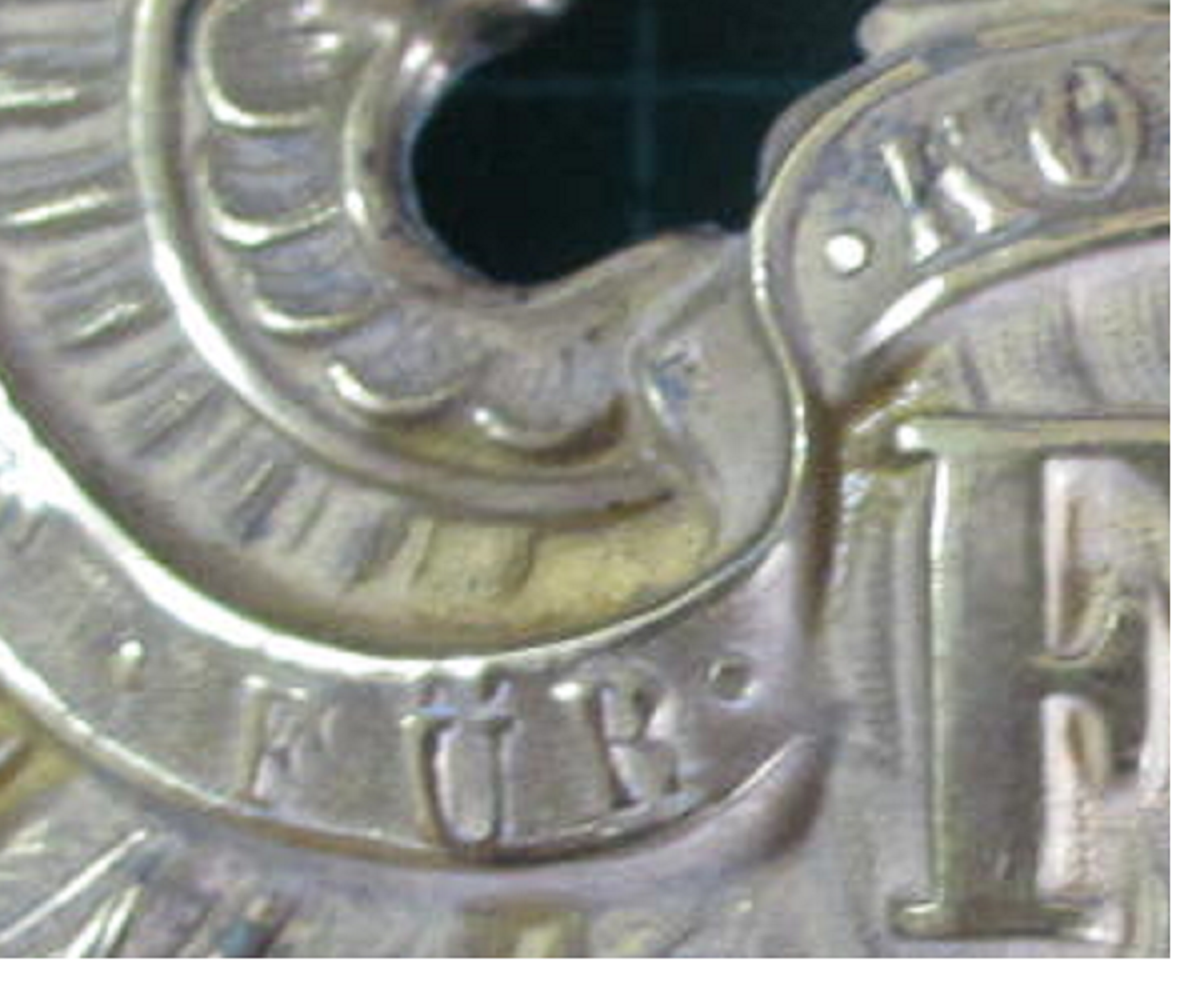 It looks like the word "FÜR" has been spread out like "F ÜR" and the "Ü" dips into the lower bandeaux edge.

Here is a comparison photo showing five different model 1860 Wappens, the last being an officer: 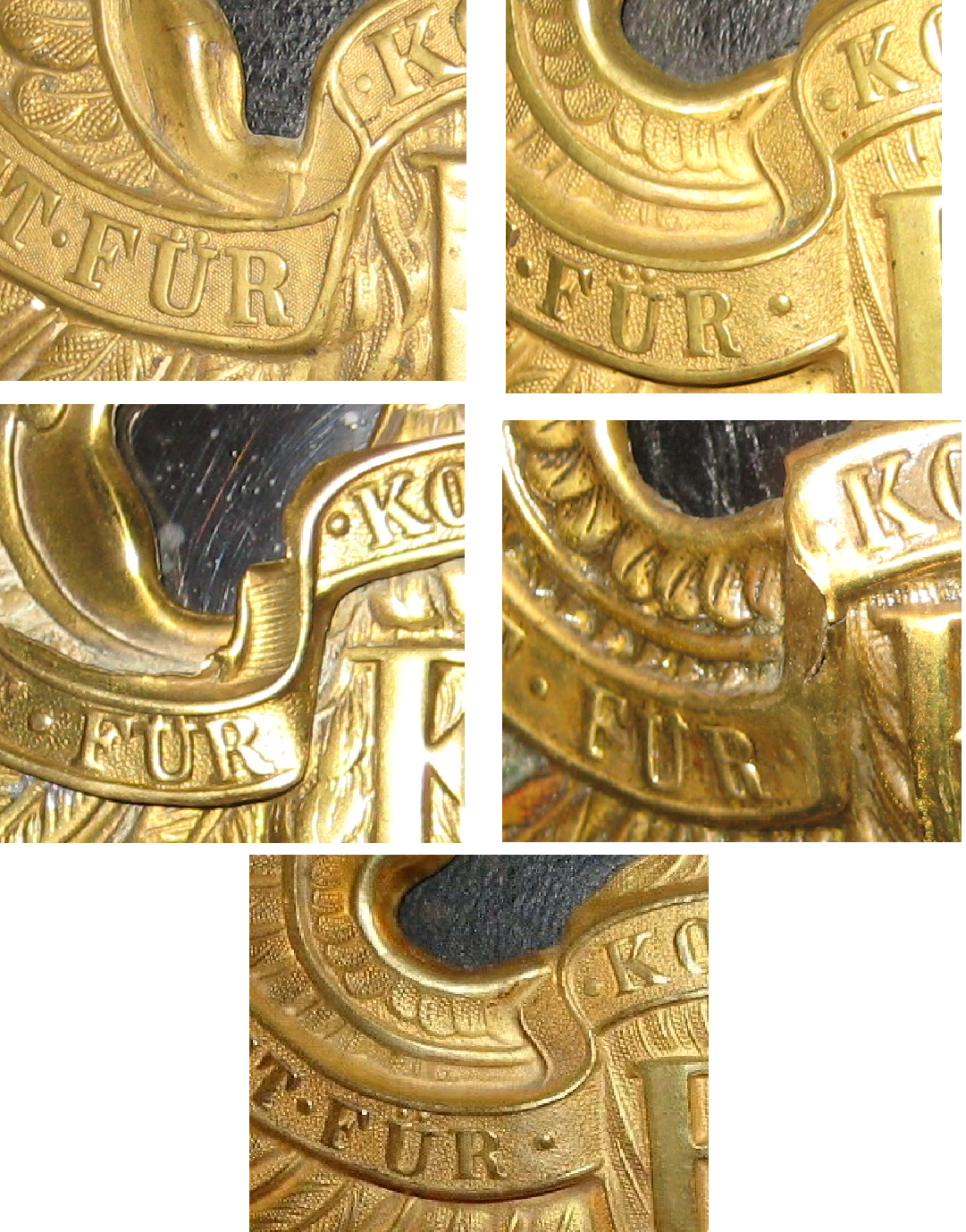 All of these are thick gauge brass and all show the same detail.

The above photos also illustrate the the "K" in "KOENIG" on your Wappen seems to be missing a leg.
This high degree of detail in the bandeaux holds true for every Prussian Wappen with bandeaux I have, from 1860 to 1915.
I, of course, do not own a Wappen from every manufacturer so this could be a manufacturer specific idiosyncrasy.
Just my opinion --- and again, based on a photograph.

Sandy,
This is an extremely unique Wappen!
The advertisement is for an 1867 officer's helmet, yet this Wappen does not have voided wings, a voided crown, and it appears (at least in the photo) that the tail feathers are not voided either.
Could this unique Wappen have been used by the Landwehr for both enlisted and officer?

John, I don’t know, sorry.
But according the tail feathers, I think they are voided. There are edges, but the metal of the helmet is a bit brighter around the eagle and the color is very similar to the brass of the plate.

SkipperJohn said:
Sandy,
This is an extremely unique Wappen!
The advertisement is for an 1867 officer's helmet, yet this Wappen does not have voided wings, a voided crown, and it appears (at least in the photo) that the tail feathers are not voided either.
Could this unique Wappen have been used by the Landwehr for both enlisted and officer?

John my collecting rule #2 is to ignore the sellers description as most times they have no clue; only what they found on the internet. I suspect you agree.

I like your suggestion that this (unknown to me before yesterday) Landwehr eagle Wappen might have been available by all ranks. As you know, Private Purchase helmets were a large industry in the German speaking Europe of that time. So some company had to have been making these yes? Maybe I’ll see one some day.

Compare with your M1860 / 67 /71 officer Wappens on the helmets you have posted, all Private Purchase of course, which are beautifully detailed [do a search of Skipper John]

Based on the references in post #22, that Metalhelm in that auction( ignoring the chinscales) to my eye, is a Landwehr Schweres-Reserve-Reiter-Regiment with an issued Prussian Landwehr M1860 eagle Wappen. If it wasn’t so trashed and my wallet was fatter, I’d bid on that just to see the Wappen in hand.

I’ve attached a new pic.
All the best
Jeremy 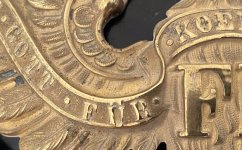 I have some information about Reserve and Landwehr and after a discussion with Tony I‘d like to add them to this post. Hope it’s also interesting for some of you.

As far as I know, the foundation of the reserve officer corps in 1868 was necessary because of the different military organizations of the German states in the „Norddeutsche Bund“. In order to harmonize the different military organizations this new reserve officer corp was founded. With the new corp, the reserve officers became younger and also took part in the maneuvers. They retained their expertise and so the Reserve/Landwehr regiments were significantly strengthened.
There were also Landwehr- or reserve-officers in the prussian army before 1868, but only in times of mobilisation. According the book „Heereswesen und Infanteriedienst der königlich Preußischen Armee“, page 188 (by Arthur von Witzleben, from 1854), in the event of war there were elections by which Reserve- or Landwehr officers for specific units were chosen from among the active or inactive officers (reactivated) and assigned to Reserve or Landwehr regiments.

Glenn pointed out: "Both the Bekleidungsordnungen of 1896 and 1903 clearly state that “the men of the Beurlaubtenstande who are placed in a line (i.e. active unit) wear the uniform of the latter without the Landwehr cross”. Both editions do however state that “Reserve-Regiments” (i.e. exercise formation formed in peacetime do so) However, one must remember that reservists served with their original unit on recall for training”

This also suggests that it was the Landwehr who were first issued (supposedly) M1895 (loops on the back) Prussian Wappens with chest cross, and that issued Reserve Wappens are from 1896 onwards, but only for raised Reserve exercise formations. How often that happened is unknown.
Click to expand...

I have translated the mentioned § 117 of the Prussian clothing regulations of 1896 and added some hopefully useful information about the conscription in the German Empire and also about troops who didn’t wear the Landwehr Cross: 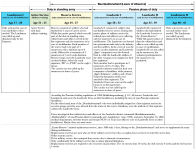 And last 2 AKO’s and a newspaper article about the cancelling Landwehr Cross for members of the district commands (Bezirkskommandos): 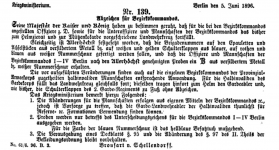 (Source: Google Books, Armee-Verordnungsblatt 1896)
Translation:
I decree that the Landwehr Cross on the caps and helmets of officers, non-commissioned officers and enlisted men employed at the district commands (Bezirkskommando) shall be omitted.
At the same time it is determined that the brigade numbers on the epaulettes and epaulets shall be made of silver-plated metal, or on white and yellow epaulettes of blue, on red and blue of white number cord. Furthermore, officers and enlisted men of the District Commands I - IV Berlin are to receive a "B" made of silver-plated metal, or white number cord.
The changes listed above also apply to the semi-invalids assigned to the individual District Commands of the Provincial Army Corps. For the semi-invalids of the Guard Corps, the Landwehr Cross is also dropped. These wear the Guard eagle on their helmets and, as before, the epaulettes of the 2nd Guard Regiment on foot without insignia.
The War Department notes the following:
1. The changes for the teams will be made from the district command's own funds, but care is to be taken that the Guard Land Guard cyclists of the semi-invalids may be reused for other reserve formations.
2. Samples are issued only as show pieces for the District Commands I - IV Berlin. The color of the blue number cord is determined by the light blue of the trim cloth. 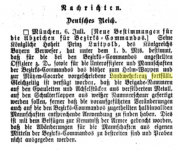 And about the Landwehr helmets from September 27, 1899:

Translation:
I decree that the Landwehr infantry regiments should wear helmets from surplus of the infantry. The rest of the Landwehr infantry keeps the shako. The Landwehr Cross made of nickel silver is to be attached to the helmet eagle as a badge.
Last edited: May 7, 2022
You must log in or register to reply here.
Share:
Facebook Twitter Reddit Pinterest Tumblr WhatsApp Email Share Link
Top