I haven't actively been collecting Imperial German awards for some time, but this proved an exception. After years of settling for gap-filler, postwar Zweitstück PLMs that run the gamut from sanctioned to schmuck, I finally landed a textbook wartime Wagner (with Eichenlaub, no less). Ignore the case, which is merely a repro for storage. As with all late war silver-gilt PLMs, the cross is solid .938 silver and proofed as such on the lower arm. The oakleaves are .800 silver. It's not perfect – the enamel is chipped below the "Po" in Pour – but the wear and tear is honest: 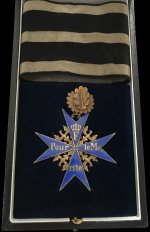 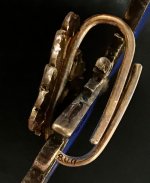 The eagles tell the story – nothing postwar can match their detail: 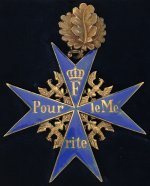 For comparison, I refer to the below as an "After Wagner." Though the eagles are a rough approximation of the Wagner style, the beaks are not open and the detail is poor. Still, from a social distance, it is reasonably convincing. This unmarked PLM copy was purchased by its previous owner in England in 1948: 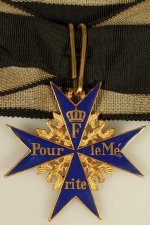 First, a C. F. Rothe & Neffe, Wien. These were produced from the Weimar Era through 1970s. The more recent Rothe PLMs were merely for the collector market. Older crosses, like this one, feature a deeper blue enamel. The lettering is chase-engraved and the eagles applied individually. The suspension ring is marked .800: 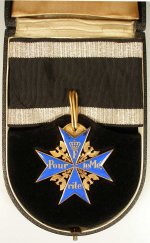 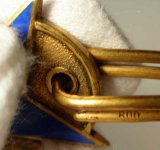 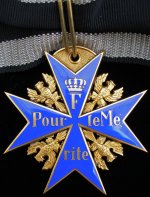 A Schickle variant illustrated in the firm's catalogue: 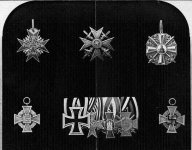 Finally, Steinhauer & Lück, Ludensheid. Another 3rd Reich Manufacturer (LDO L/16), S&L PLMs enjoy a controversial status among collectors. The earliest S&Ls, like this one, are .800 silver-gilt. Later crosses are bronze-gilt, and, in my opinion, little more than mass-produced replicas. The archetypal S&L features eagles with crudely finished legs, and an "ur" in Pour connected by the respective serifs. In 1957, Steinhauer & Lück produced official "de-nazified" Wehrmacht awards and badges, and the firm exists well into the 21st century.

Wow! That is stunning. What a great find and excellent post. Thanks for sharing.
R

Great to see you post this, what a great example, a great addition to your collection.

Excellent! Thanks for posting this!

Staff member
Great to have you back with us Charles, excellent post and photos as always. Congratulations!

Thank you one and all for the kind words.

Brian, I see the forum has a new look. I will have to learn my way around the manor anew. I have two more photos to share – portraits of Ernst Jünger, the last living recipient of the Pour le Mérite.

In advanced years he wears what I believe to be a Steinhauer & Lück Zweitstuck with the 50 year jubilee crown. It is certainly not the same PLM as in the wartime photo: 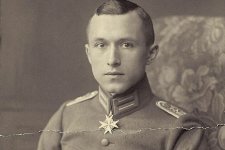 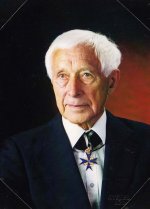 Staff member
Yes Chas, we have entered the 21st C at last . It is actually much easier to post and get around the forum now. Naturally, I have read "Storm of Steel" but I have never seen either of these two photos before. Thanks for posting these.
You must log in or register to reply here.
Share:
Facebook Twitter Reddit Pinterest Tumblr WhatsApp Email Share Link
Top