Excellent !
Thank you for the photos
Steve

Well that is super ! Is this in your collection ? I think that this is correct for
1 L H R 1
2 L H R 2
and H R 4
Thank you for the photos and the post
I have the Sakular Parade Banners for the KAGGR # 1 / I Batl and II Batl
Steve 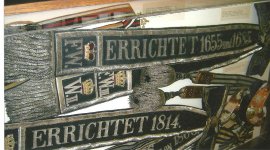 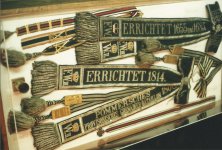 I noticed that the LHR 1 reserve officer is the war time " Plush " body does not have a Bandeau. Was that common on these war time ones?

Staff member
The lack of a Bandeau is not due to the War.

Reserve officers of Leib-Husaren Regt. 1 and 2 since 1813 did not wear a Bandeau (nor did any Reserve and Landwehr) as that was taken care of by the Little tiny Landwehr cross on the officer’s Feldzeichen.

Hi KAGGR # 1, thank you so much for showing these tapes. I admire your collection especially with regard to flags.

Yes, the Leib Husaren regiment tape is from my collection. I also have the one from the Kürassier -Regiments Königin -Pommern- Nr 2, and another that I have not identified but that I think
It may be from ULANEN REGIMENT N 6, because it is the only one I have seen that has the upper part of the number 3 in the figure straight

Great information provided by all, Steve, Tony and now 03 have greatly expanded my knowledge in this facet of Imperial German military collecting.
Thanks
John

Hello 1003CAT ;
I have a collector friend who now has the 2 L H R 2 Standarte .
Is this there a dollar or Euro figure that you would consider
to sell your 1741 Sakular ?
He would pay top dollar or Euro plus to buy it and complete his flag .
I am in the USA in the State of Tenn.
are you in Europe ?
If you need any references I can provide them to you
Many thanks
I await your answer
Steve McFarland
You must log in or register to reply here.
Share:
Facebook Twitter Reddit Pinterest Tumblr WhatsApp Email Share Link
Top