Actually, he was wrong as usual. Now that this person is banned and gone, I will happily discuss a few of the issues with his $5K copy on ebay.

I had the pleasure of contributing in a small way, to the outstanding 2012 book by Stephen Previtera “Imperial Sky – Flight Badges of the Imperial German & Bavarian Armies”. I feel privileged that several of my flight badges have full page spreads. 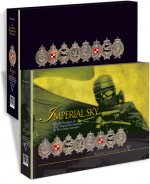 Now lets have a look at the $5K copy as 'requested' (demanded actually) by the banned individual known as "online_gsale" on ebay. I will just cover a few key features which make identifying his badge as a bad copy very easy.

First, compare the front. I have taken the liberty to use a nice original unmarked (Flugzeugführerabzeichen (Pilot's badge) belonging to fine gentleman named RonR on German Helmet Walhalla 2. 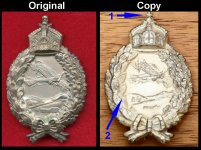 1. On the original, the top of the Hohenzollern crown is square. On most copies it is incorrectly cut out.

2. Original Prussian pilot's badges have only three beads on the left side. There is no bead where the oak leaves meet the ground. On some replicas, the fakers put beads all the way down, so there are four beads on many replicas, and on this copy, gosh there it is. . It should be mentioned here that original Meybauer badges (with the distinctive tied ribbon at the badge bottom), however, do have beads all the way down on the left side.

There are many other details, but just these two points are "The kiss of death".

Moving onto the reverse. Yes I have the bleach ready in the washroom this is so bad.... 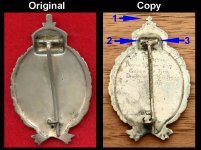 1. There is that voided top to the crown again.

3. On original flight badges that have a hinge well (Juncker for Prussia, Pöllath for Bavaria), the indentation follows the shape of the crown. They have a distinctive curve to the hollow that almost touches the top of the crown. This feature is exactly the same for all Juncker and Pöllath for flight badges, ray-backed and flat-backed. On many fakes including this one, the scooped out area is just a rounded blob.

These three points alone identify the one of the right as a copy. However, the real 'gem' is the engraving which is frankly, hilarious.

A ton of these poor copies are crudely engraved in block lettering clearly identifiable to very famous aces. I have seen these engraved to Boelcke, Immelman, Udet, you name it. They are exceptionally crude. No original German engraving comes even close to looking that bad. As Brian L pointed out, German jewelers did not use a $10 engraver. German period engraving is absolutely superb. As an example, I will use a a silver Zigarettenetui (cigarette case) in the form of a Husaren Säbeltasche for Braunschweigisches Husaren-Regt. Nr.17 named to the Operations Officer of the General Kommando (General Staff) III Reserve Korps which served on the Russian Front and presented by Rittmeister Ruhstrat of Husaren-Regt. Nr.17.

Now compare that engraving to the copy, which looks like it was scratched on with a nail. AYYEE!! MY EYES!!!! 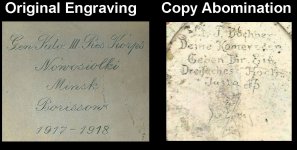 The typical excuse was that "it was done in the field" which is complete BS.

I could go on, but this should be enough to help anyone spot one of these atrocious copies. AND! It can be yours for only $5K on ebay!

I am very sad to report that this item is no longer on ebay.

Naprawiacz said:
I am very sad to report that this item is no longer on ebay.
Click to expand...

Did somebody actually buy that thing!?

SkipperJohn said:
Did somebody actually buy that thing!?

Tony, the bleach was painful, but not as painful as looking at this fake!

Tony ;
Excellent !
Thanks
Steve
B