At the end of “Casques à Pointe et Coiffures Prestigieuses de l’Armée Allemande. 1842-1918 » (vol. 1), Jean-Louis Larcade wrote a section entitled « En matière de faux ». I have translated it in English as I thought it might be of interest for the members of this forum:

“About fakes...
Between WW1 and WW2, at the exception of a few prestigious examples, headgear of old german armies had practically no value at all. German helmets were not sought after, at the exception of a handful of collectors who probably looked quite weird to their fellow militaria collectors. We have been able to meet several of these old-timers who, for almost all of them, made the same comment: “When I did not possess the spike helmet from a small state but I had the correct plate, I built it up with another helmet, without bothering about regimental markings”. This is how forgery started, with no evil intent since these early collectors had no will to sell their production. Available items were countless, and demand was almost null since amateurs, in the years 1920-1940, collected almost exclusively pre-1871 French militaria. Then, in the 1960’s, the price of german headgear started to increase linearly until 1970. From then on, prices litterally exploded, ruining the dreams of many people with limited funds who just collected for the fun of it.
Purchasing spike helmets became an investment for a new class of “knowledgeable amateurs”… who were in fact only concerned with the trade value of these objects, and who started buying anything, regardless of the price, as long as it was shiny and flashy. This new trend was particularly obvious at auctions. The most famous one took place at the end of 1970, and caused prices to double in one day. Incredible put-together fakes (the French slung word is “bidouille”; it is impossible to translate litterally but the meaning is extremely pejorative…) sold for small fortunes. To mention but one, a claimed prussian Leib-Gendarme helmet, a spectacular and exceptionally rare item, made an extremely high price; it was in fact a fake built from a 1867 prussian cuirassier helmet! And people fought to purchase such a thing!
We have seen the first plate reproductions at the St Ouen flea market (a major flea market located in Paris northern suburbs) in 1966-1967. These were likely made from original models but the maker probably did not have a strong enough press since the finish was very poor. These were all made of brass and attachments could only fool laypeople as they were made of screws of “ISO” thread size. Matching nuts were neither square or hexagonal but round… On guard eagles, the star that should be made of white metal was made of grossly silvered brass and soldered to the eagle.
At the same time, virtually all fittings of the 1895 model spike helmet were also made new, as well as stars, rear spines and chinscales for officer helmets.
Other plates reproduced by galvanoplasty are easily identified after inspection of the back.
The quality of these fakes then increased significantly and a second generation arrived from Germany. Surprisingly, these were sold as copies in Germany but crossing the border was giving them full authenticity. On enlisted plates, attachments were now the expected brass loops but their ends were folded inside, and not outside as on authentic plates.
All of the spectacular officer helmet plates with enameled centers are also made new (one sees, for example, so many pre-1912 IR92 helmets of the Ist and IInd batallions!!!) but the enamel is usually not very crisp, nor does it have the exact color of old plates.
Even parade eagles for Garde du Corps and Garde Kurassier helmets have been copied for at least 10 years but all fake examples we have seen have a feature that allows to spot them readily as copies: the eagle is of the enlisted type but it is mounted on an officer-type clover leaf basis.
Beware also of false regimental markings, which often look amazingly authentic. However, a rag impregnated with 90° alcohol usually readily makes the difference!
To conclude this long “gibernage” (impossible to translate: this exotic word qualifies a passionate conversation between militaria collectors), our last word is to advise the most extreme caution when you purchase helmets. We wish you good luck, dear fellow collectors!”.
And this was written 23 years ago…
Bruno

Staff member
Hey Bruno,
Thanks for the translation, I have not seen this writhing as I do not have the book, but I have found that the French collectors are up on much of the fake or miss represented items on the market. This sure explaines the number of helmets that have the wrong markings for the plates. Putting a state plate on a Prussian marked helmet by a collector is much like a collector sewing a set of shoulder boards on a tunic for display reasons. After the collector passes away, the items can re-inter the market with out disclaimer, these "fakes" are of the innocent varity, but those who sell items they know are not real, as real are criminal, as they are stealing money from the buyer.
Best wishes
Gus
R

I would also like to add my thanks for your translation. Also, thank you for the pictures of the Abel Herve. It is a beautiful painting.

Joe, I think the best way to visualize what Larcade is describing is to think of a D shaped loop where the straight vertical represents the "ends folded inside."

Staff member
Hi Chas,
Thanks for discribing the loop for Joe, I was going to draw a picture, but now I dont need to. The real loops would look like an omega.
Gus
R

I forgot to mention that while the "D" shaped loops are a good general rule of thumb for a plate that is a copy, it is not 100% accurate. There are original issue front plates that use "D" shaped loops to affix the plate to the helmet, specifically Saxon plates.

Joe: The theory is that when an isopropyl alcohol soaked rag is rubbed over a unit mark some of the ink will be disolved and stain the rag if the mark is recently applied. I would not recommend putting alcohol or any other solvent on old leather for any reason. It is definitely not good for the leather. The best way to judge the authenticity of unit marks is to study known original markings paying attention to size, shape, location, style, and other features a helmet with the particular mark
should exhibit. As you become familiar with good markings the bad ones begin to stick out like a sore thumb.

Staff member
Here is a link that take you to some discriptions of fakes, it is several years old, and a good portion is in French, but remember that bable fish can be of great help.
http://meltingpot.fortunecity.com/utah/894/fakes.htm

Thanks, Bruno! There is a lot of information in foreign-language sources that needs to be made available to English-speaking collectors.
Good work!
R

Joe: Take a look at the Saxon M15 posted in the latest find section. There is a good photo of the back of the front plate showing the "D" shaped loop on an original issue plate.

I updated the running horse article, which takes exception to Lacarde's claim on the number of Brunswick running horse wappen. I have no objective numbers, but I have nailed down the reasoning.

In volume 1 of his excellent two-volume series. The French author Lacarde laments that there are many running horse fakes. He alludes to the fact that in some cases, the enamel is just not right. While I am positive that the author has seen some phony enamel, the catalog quote above should prove that not all of these wappen were enameled. But why so many? It certainly seems that there are more of these than one would expect from two battalions of use prior to 1912. The answer is in the landwehr. All officers under the Bezirkscommando wore this wappen. All other than active units in XCorps are suspect at the least. This excerpt from "Das Deutsche Heer" bares this point out
Click to expand...

The writing in red was done by an older collector, and it says not in enamel. No proof of this claim exists that is currently known.
Click to expand...

An entire article is at:
http://www.pickelhauben.net/articles/Runninghorse.htm
J

Gustaf said:
Here is a link that take you to some discriptions of fakes, it is several years old, and a good portion is in French, but remember that bable fish can be of great help.

Hi Gus,
I checked the link you posted, and it is a dead end.
Best regards,
John

Staff member
I had forgotten about this post, we need to pin it in the wappen section. Again, my thanks to Bruno for translating Larcade!

JohnS3rd said:
Hi Gus,
I checked the link you posted, and it is a dead end.
Best regards,
John
Click to expand...

Sadly a lot of these great web pages are becoming unavailable, James LeB is working on getting dome of Joe's post saved on the forum.

A point of clarification to the point of clarification… My experience has been that on Garde star, they are not actually a D shape. They are basically a round ring, cut at the bottom, opened a bit, bent a little to flatten where they are cut, then soldered on. That is because issued Prussian eagle Wappen have two narrow slits that the Garde star ‘split rings’ go through. You will find these going back to 1860. The star is held onto the eagle with a ‘split ring’ and the eagle is secured to the leather helmet with threaded bolts. So ‘split rings’ for attachment of Garde stars were used far before the Foot Troops M1895 loop. 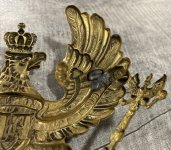 Tony without Kaiser said:
So ‘split rings’ for attachment of Garde stars were used far before the Foot Troops M1895 loop.
Click to expand... 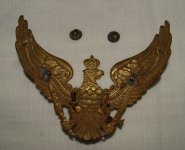 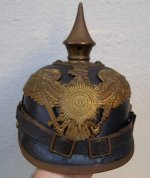 This may also be true for M-Schwerin center... 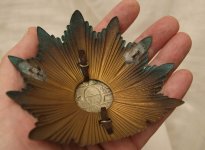 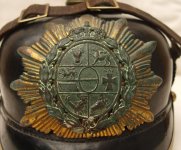