There are three very interesting early photos on Ebay, two of which show some American militia unit spiked helmets and Prussian style tunics. The chasseur is also interesting as it must be very early. I wonder if the rifles might date the photos. Can anyone identify them? Are they muskets? There are other photos of these troops organized in San Francsico but they seem later. The city was prosperous before and after the Civil War so the units would have had the ability to have these custom made to German specifications. The tinted San Francisco guy looks very early suggesting those "guard" -style spread-eagle plates are early as well. The New York soldier looks later.

Second photo - he is armed with the pattern 1861 Rifle Musket, because the photo has been colorized can't really make out his buckle (is it US or SNY or something else??). Leather items look to be regulation patterns

Third photo - again is armed with the 1861 Rifle Musket. Shako is the 1850's pattern militia type, Frock coat and leather items appear to of the French pattern.

Both New York State and the city of SanFrancisco had units the worm German pattern uniforms. The last two photos I would think date before 1876, by that point must militia/National Guard units should have had breach loading weapons. I wouldn't date any pre-1863.
N

Thank you! That is very interesting and suggests that National Guard unit investment in the German style dates back right to the end of the Civil War. (There were a few early units who dressed in the 1842 style but that was unusual). This seems to be a more widespread phenomena especially with those guard eagles. Many colleagues put the origin of this phenomena much later into the late 1880's and 1890's. So this might be the effect of the Austro-Prussian and the Franco-Prussian wars directly then and of course you have the effect of the German migration after 1850 with the collapse of the federation. Also I note that the eagle on the chasseur is interesting as it is the transitional Republican 1852 shako version without the crown introduced by Louis Napoleon. Once he became Napoleon III as emperor, the eagle wears the imperial crown. I can see that this eagle would then have great appeal over here for troops engaged in defending the US Republic. Nice turn around in marketing to the National Guard by the French Government no doubt.

I attended Norwich University, an old private military school. I recently saw photos in their museum of cadets wearing spike helmets as part of the school uniform sometime in the mid-late 19th century. Pretty cool!
N

Interesting... I wonder what happened to them all then, especially the enlisted helmets as there must have been a fairly large run of them then. Collectors on this web-site consider them fairly rare and our experts tend to feature the officer's models for discussion which are indeed spectacular. I remember as late as the 1970's it was still possible to find a lot of these 1860's-1890's uniforms in used clothing stores. The hippy fascination with militaria fueled some of this... Sgt. Pepper's and all that. I saw some zouave jackets at a head shop in Massachusetts when I was a student. There's the famous story by Don Troiani of his spotting a Berdan's sharpshooter coat in a bin around that time as well.
A

Thanks for the heads-up on this! I was able to win the awesome portrait in the first link...

This is from an article in the NU newsletter. Check out number 3 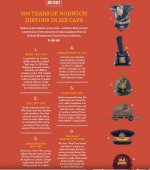 At the start of the American Civil War there was a New York Militia unit from Brunswick NY that wore a black uniform from Brunswick Germany. I don't believe this uniform included a spike helmet, but they wore a shako. Maryland did have a "Germany" unit that wore a Pickelhaub at the war's start. In the 1870 companies in the various states did adopt Prussian style uniforms. I know of a calvary company in San Francisco that wore the uniform of the Leib-Husaren Regt. Nr.1. All the enlisted men's uniforms were purchased from Germany, but German law prohibited the exportation of officer's uniforms. So the officer's kit had to be obtained locally. I believe that New York, New Jersey, Michigan, Illinois, and California, that also had units wearing Pickelhaubes, during the 1870's, '80s, '90s. This maybe an interesting research project. :-k

There is the regulation "American" spike helmet. I'd be interested in finding out more about German Uniforms in America. 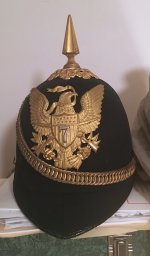 Norwich turning out in Bell Crown Shakos!! Wow that sure puts another perspective on those surviving examples which are also assumed to be either US 1820's issue or Militia. Those would have been expensive. I'm glad Arran got the photo. I thought it was early and unique. I guess another question is whether these German units were separate or attached to larger units which wore standard uniforms. There are a lot of questions here because although the regulation helmet which is more like the British style was widely used it makes the Prussian style all the more curious. One of the best programs on German immigrants in America came up with Ken Burn's "Prohibition" where it was shown that brewing together with socialism, wheat communes and Sunday's off work constituted a major, enduring and pervasive contribution to American culture. There was a lot of resistance by mid-western to western German communities to what was perceived to be the dominant and prejudiced Anglo-Protestant culture of the East so you you got to wonder if the German style for militia was inspired by more than the 1860-1870's dominance of the European battlefields by the new Prussian army and therefore intended to have a cultural appeal as well. It could also come down to wealth and preference for style by individual units. Those pickelhaubes can't have been cheap even for the ranks. San Francisco Leib-Husaren Regt. Nr.1 uniforms... I wonder where they all went? I've never seen one and I've lived in California for 45 years. Maybe they went into collections as originals?!

I've come up with couple of American unit in German uniforms in addition to those already mentioned.

There would also appear to be a Hussar influence in Colonel Fleming's uniform...nice!
N

Hussar jacket but possibly British patrol jacket and/or French Artillery officer. It strikes me that that is a veteran officer who really knows how to wear that helmet... very distinguished and it also has a high dome.

The Essex Troop itself worn more of a British pattern Hussar uniform with a busby that was a mix of German and British styles. It was low as per the German but the set up was more Brit.

As to Col.Fleming - he had severed in the Civil War and stayed active in the New Jersey Guard afterward. He founded the Essex Troop, but I'm not sure he was a actually member (they were originally formed to act as his escorting a parade). As to why he is wearing the Pickelhaube, I can only assume it was part of the uniform of the unit he commanded, but as of yet I haven't found out which it was.
A

I believe Colonel Fleming's Pickelhaube does bear the flowing "ET" cypher of the Essex Troop on the shield on the eagle's chest. There were more than several National Guard units that wore an odd combination of uniforms with Pickelhauben in the post Civil War years, right into the 1890's...
A

Here's a larger version of the Fleming portrait, and the Essex Troop cyphers can also be seen on his collars...

The same monogram appears to be on the helmet plate.

Just came up with another German uniformed US unit. The 41st New York ((DeKalb Regiment, or 2nd Yaeger Regiment 1861). They wore a uniform pattern after the Prussian Jägers. Their head gear appears to have been a green forage cap piped in red.
You must log in or register to reply here.
Share:
Facebook Twitter Reddit Pinterest Tumblr WhatsApp Email Share Link
Top