Came across this Landsturm man recently. The highlight of this photo (no, not the Gew 88 ) is his feldgrau M1860 tschako with Baden wappen. His collar dogs identify him as a member of the 56th Landsturm Brigade. Circa August 1914 - April 1915. 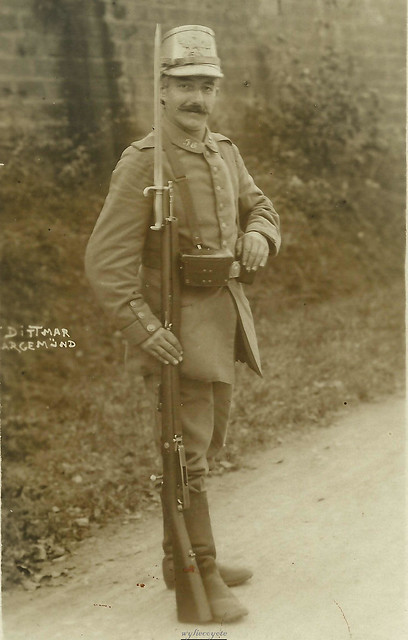 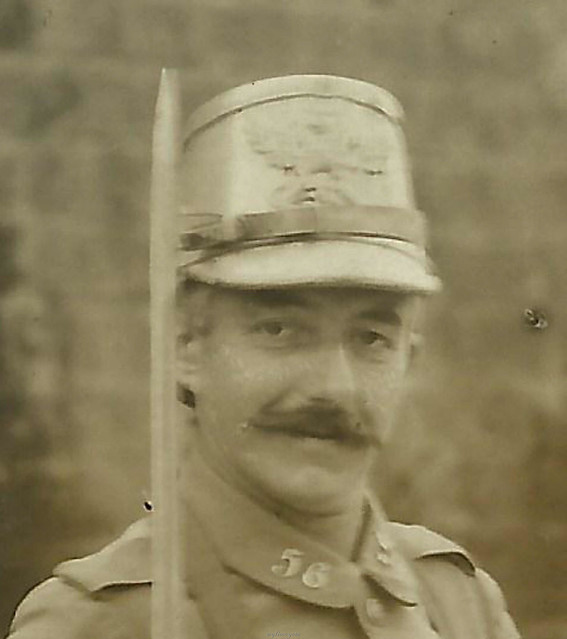 His collar dogs identify him as a member of the 56th Landsturm Brigade
Click to expand...

Methinks his collar dogs identify him as a member of a Landsturm Battalion formed in the 56. Infanterie-Brigade area.

There was no such animal as the 56th Landsturm Brigade.

Not to be contrary, but that is not so. I am also of the opinion that actually we are thinking along the same lines. The only affilliation we can see from this photo is that his battalion was assigned to the 56th Landsturm Brigade.

Let's let Joe explain it, shall we?

Here is a link to Col J's Landsturm Article.

When the German military was ordered to mobilize August 1, 1914, the Landsturm Battalions began being formed & mobilized too. There were 334 Landsturm battalions established. Of these 142 were considered "mobile". The battalions that fell under the Bezirkskommandos were administratively grouped into brigades that followed the peacetime brigade boundaries of the Army Corps District. So the number of battalions per brigade varied greatly. The determining factor was how many battalions were located inside the geographic boundaries of the brigade area. This brigade assignment can be easily identified in pictures as the individuals wore metallic Arabic numerals or “Collar Dogs” to display brigade affiliation, starting in 1914.

This was an administrative brigade number, and did not reflect an employment capability. There was no brigade for the Landsturm as in a commander and a staff. They were administratively grouped into brigade organizations only because they were administered by the Army Corps District which was itself broken down into brigades. You will see Brigade collar dogs which would remain in service until regulations were changed on 14 April 1915, and the Brigade numbers were eliminated.

An AKO regarding Landsturm was issued on 14 April 1915, authorizing the Landsturm to do away with the Brigade collar dog devices, and authorizing new collar dog devices, with the Armee Korps in Roman numerals and Btln. numbers in Arabic numerals. These can be seen as applied A.K. numbers above and to the side Btn. numerals, and the gilt/brass devices are displayed in all manner of styles and sizes, what ever was available. It appears to have been up to the interpretation of individual Btlns.
G

Not at all my friend, this is what discussion forums are all about. Please see the meanderings between Joe and myself on this thread (2nd page):


From Kraus, page 472 regarding Landsturm-Infanterie-Bataillone:

Methinks his collar dogs identify him as a member of a Landsturm Battalion formed in the 56. Infanterie-Brigade area.
Click to expand...

I agree with Glenn, and if I said or wrote anything that confuses that I was wrong.

From the link that Glenn provided:

I guess this is the base issue to me. Looking at 1914 and not the latter-day logistical organization such as in Pierre's picture I am not comfortable with this. While no one can fault your view of the issuing [what a great logistician you must be!!], I am not so sure it worked that way. If it did, we would find pictures of the brigade number on the shoulder straps. Not sure that I have found that yet with a clear identification to a brigade ersatz battalion. Likewise, I don't think I have seen the opposite either with a clear identification to a brigade ersatz Battalion. So this is a clear vision of what I need to look for thank you for humoring me on what could otherwise be an esoteric subject.
Click to expand...

And Glenn–I will have a look at Krause later today but how is this reference squared with those pictures which I think are inspection oriented that have no number?

From Kraus, page 472 regarding Landsturm-Infanterie-Bataillone:

but how is this reference squared with those pictures which I think are inspection oriented that have no number?
Click to expand...

I think sometimes you just cannot square the circle. They had a great deal of difficulty (as we know) clothing and equipping 2nd and 3rd line formations at mobilisation and the myriad assortments of dress that the photographic evidence shows, does not always conform to the regulations as prescribed!

So they are Infantrie Brigade Collar dogs!?

So they are Infantrie Brigade Collar dogs!?
Click to expand...

This from the dress regulations of 1903:

Again - Bravo to all the commentators for continuing to publicly nut this one out. I cannot offer anything by way of new information into the discussion except the odd picture now and then, but rest assured I am intrigued and feverishly cutting and pasting the quid pro quo into word documents in case - and god forbid - the forum ever gets corrupted.

Staff member
Great discussion of a very cool foto. Missing the feldzeichen on that shako. I wonder if that was deliberate?
W

Glennj said:
This from the dress regulations of 1903:

Thanks so much for posting this, absolutely fantastic. :bravo:

I just last night found reference to this in Johan Somers, Imperial German Field Uniforms & Equipment 1907 - 1918, Volume 3. I lmao, how did I miss this? lol.. The second page of this volume, Chapter 15, page 835, ", Landsturm infantry units wore the number of their Infantry Brigade on both collar tips of the tunic using brass numbers." Couple of shoulder boards belonging to Chip Minx & Tony Schnurr are pictured.
You must log in or register to reply here.
Share:
Facebook Twitter Reddit Pinterest Tumblr WhatsApp Email Share Link
Top