I recently came across a photo of Bavarian Landsturm with 3rd Infantrie Brigade collar dogs. On reverse they are identified as being from the 4th Komp. Landsturm Inf. Batl. Kempten, 84. Landwehr Brigade. 13 Mai 1915. The photograph appears to be in remembrance of being awarded Bavarian Military Merit Crosses. Here are the awardees: 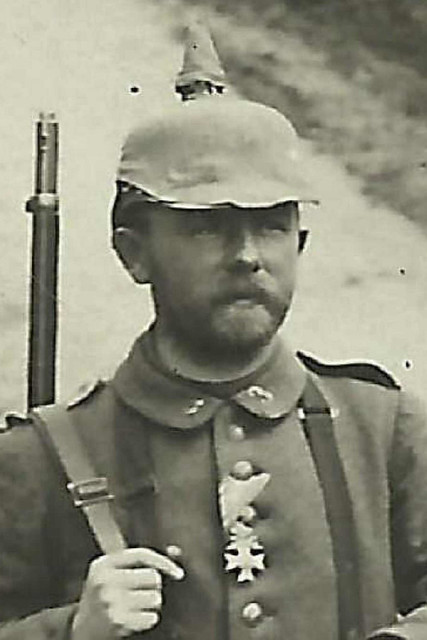 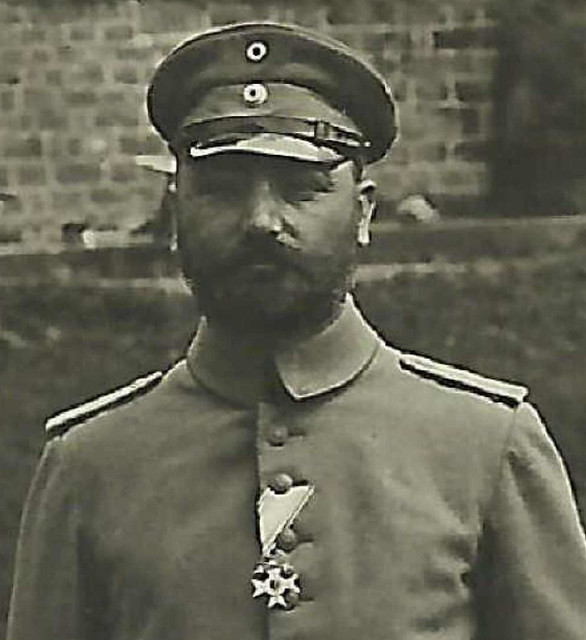 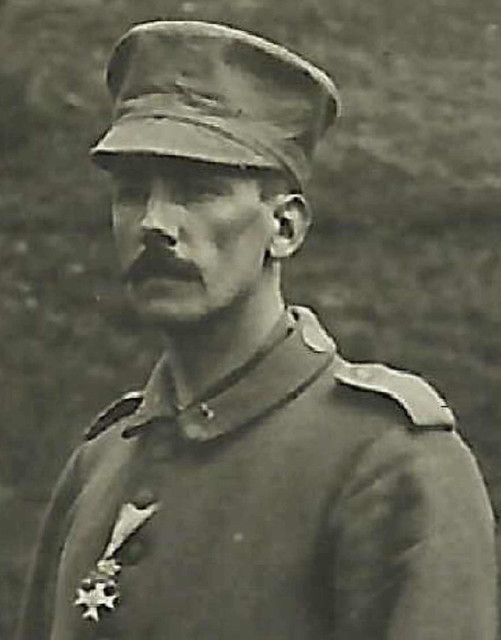 Do I have the correct identification of these awards?

Here is the photo in all it's splendor!

The three men with rifles are armed with Gewehr 88 and S71 sidearms. Two men on the outer edges of the group wear pickelhauben with plain covers, the other three enlisted men wear wachstuchmutzen with uberzugen. 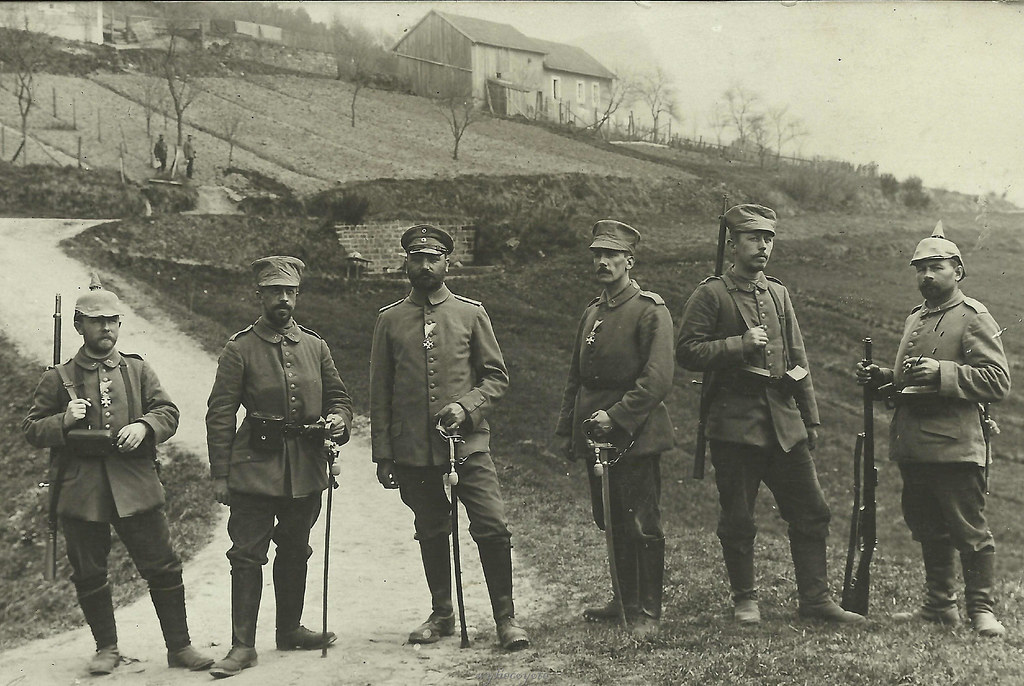 As you already know, George, I think this is a great picture! :bravo:

For all others, who are interested in front photos. I mentioned this unit recently in my photo impression about Montreux, Northern Vosges, west of the Donon. http://pierreswesternfront" onclick="window.open(this.href);return false;​.punt.nl/index.php?r=1&id=​550371&tbl_archief=0#55037​1 . More photos of the Donon / Badonviller front sector? Visit my photo page about the Col de la Chapelotte, Allarmont and the Col du Donon; http://pierreswesternfront" onclick="window.open(this.href);return false;​.punt.nl/index.php?r=1&id=​442668&tbl_archief=0#44266​8 .
I will also launch in December or January an extensive photo impression about the tens of German bunkers at the foot of the Donon.
Interested in updates? Follow me on Facebook or write me an e-mail for my monthly newsletter e-mail service.

An excellent treatment of this exquisite photograph Sensei - in your own inimitable style! =D>

The background is the best part, too bad color film wasn't universally used in that time!

I was looking at the background–and I remembered this. This entire hat thing has been thrown a major curveball. Model 88–reservist? 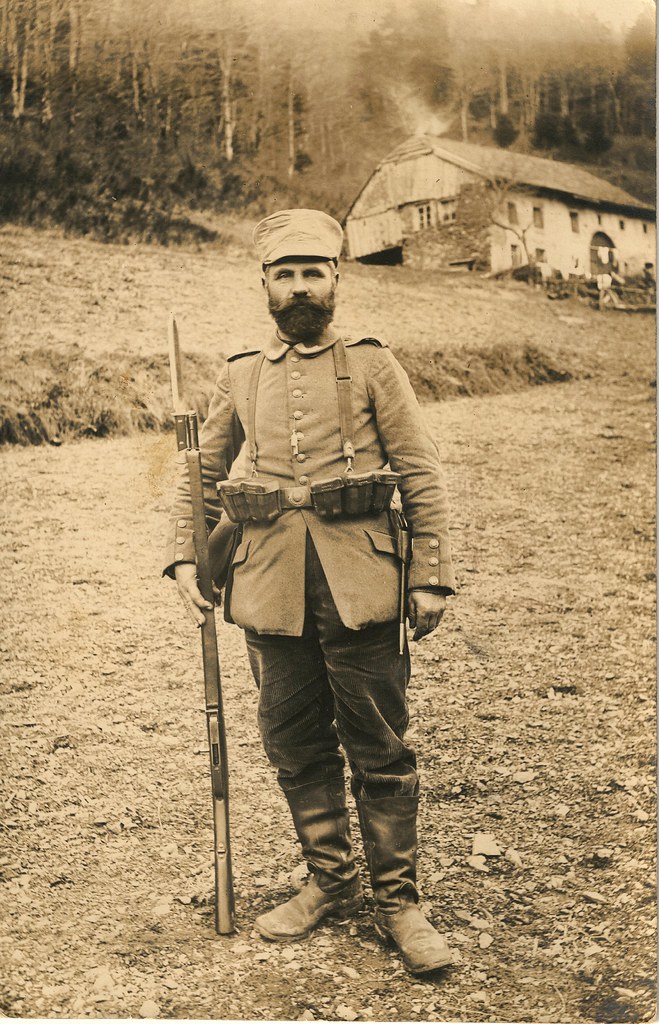 I always liked this ole boy! Wonder if this is in the Vosges region?

If he was a reservist, (and he could be), he just might have a regimental on the uberzug. He would probably have a Gewehr 88/05 instead of the Gewehr 88 (and fixed S71/84 bayonet). Off the top of my head I do not remember if reservists were issued corduroy trousers, andbody have some insight regarding that?

Wyliecoyote said:
Off the top of my head I do not remember if reservists were issued corduroy trousers, andbody have some insight regarding that?
Click to expand...

Some anecdotal evidence they were:

Wyliecoyote said:
I always liked this ole boy! Wonder if this is in the Vosges region?
Click to expand...

It looks like it, George, but from my experience it is always tricky to define such locations as being French or even perhaps German without any other evidence than my "it looks like it".
Considering the architecture of the farm building on the last picture of Joe, I would say it is in France, possibly the Alsace, but again without any hard evidence.

Of course, from my topographic angle of interest I do especially appreciate such a topic like this, in which the background is discussed! We had already an interesting one about one of Drake Goodman's (Brett) pictures about POW's marching through the centre of Mulhouse. Please, gentlemen, go on! :bravo:

That guy is Bavarian. This is only a guess of course but most of those pictures were taken near home before they left. So this might be Bavaria.

You have taunted me with that helmet cover before. Yes you taunt me again. Do you have no pity for those of us who are extremely envious?

Have you ever wondered what else they could wear?

Brett's photo reminded me of this one with an unusual regimental and corduroy trousers: 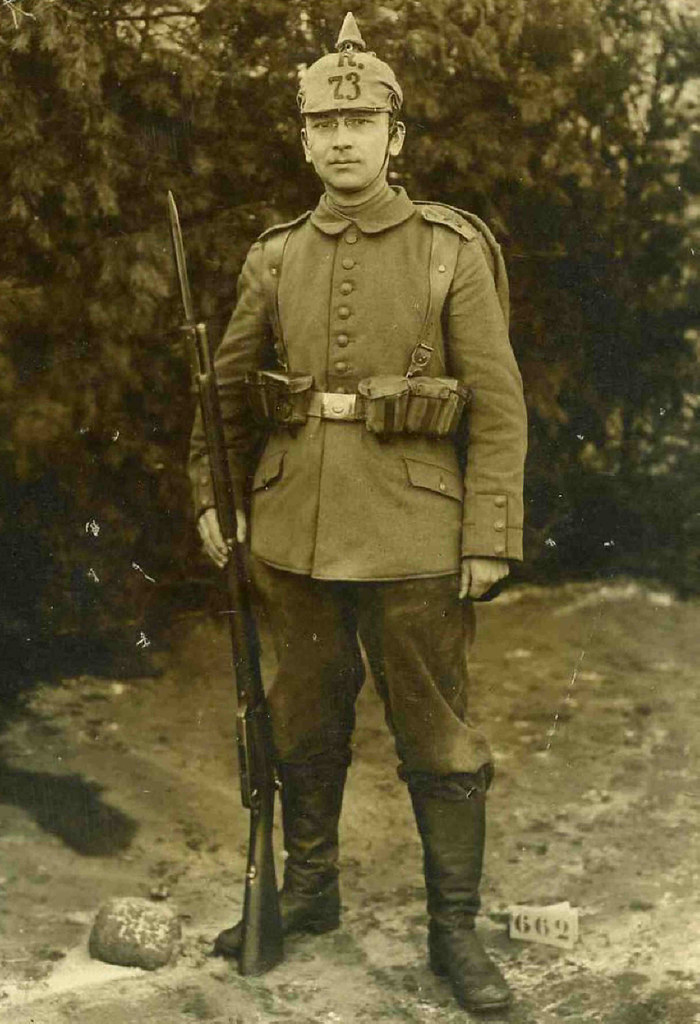 You have taunted me with that helmet cover before. Yes you taunt me again. Do you have no pity for those of us who are extremely envious?
Click to expand...

I thought we were friends again after I gave you the heads up on that GMGA picture - which I may add is exquisite. When I saw it on Flickr I kinda wished that maybe I should've ... :wink:


Wyliecoyote said:
Brett's photo reminded me of this one with an unusual regimental and corduroy trousers
Click to expand...

I thought we were friends again after I gave you the heads up on that GMGA picture -
Click to expand...

Okay okay you are right---That was nice thank you. Just don't bid me up on the current treasure!

I've only got one bid running at the moment (on Ebay), I checked first - no joerookery or gwyliecoyote, so I think you're safe, but I confess, I'm now intrigued by the "current treasure" remark. Are you going to make me go looking?
You must log in or register to reply here.
Share:
Facebook Twitter Reddit Pinterest Tumblr WhatsApp Email Share Link
Top