While the Pistole.04 is the iconic handgun of the Imperial German Navy, there were several that preceded it.

Going back to the founding of the German navy in 1848, here are the early handguns, with their holsters: 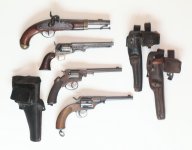 I will be posting information on each in the coming weeks.

Interesting, can you post some details as to models?

Is this your collection ? Very nice .Thanks for the post
Steve McFarland

From top to bottom:

M/49 Marinepistole - The first German navy pistol, 1,000 purchased for the First Fleet, the Reichsflotte created in 1848.

M/79 Marinerevolver - an estimated 2,200 Reichsrevolvers were procured by the Navy. Shown with its holster (left).

The M/49 was carried by a belt hook, so there was no holster. Note that the other holsters all include a pouch to carry a box of ammunition.