Between 1900 and 1905 were there any units posted to the East (China) that would have worn a busbie? I ask, because on another page someone has one posted and I've never heard of Huzzars in China. 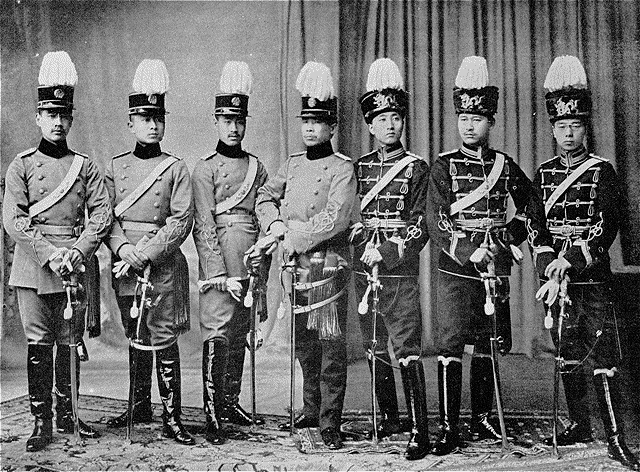 Seven Chinese officers, having already spent four years at the Wou-Chang military academy, have just taken up service in Germany. Three of them were attached to the field artillery corps, garrisoned at Wesel, three others to a regiment of hussars, at Dusseldorf, and the last served in engineering, at Deutz.

A photograph, all picturesque and documentary, brought them together in a group of a very suggestive aspect. Under their German uniforms, they have really beautiful dress and martial air, these sons of the Celestial Empire, current ornament of the German army, hope of the Chinese army, and if, by the type, they recall the Japanese officers , their size, greater than that of the Japanese, gives them perhaps more military presence.

Thanks for the posting of the photo. That's interesting. What I asking about would be an actual German unit. One of the helmet facebook groups has a Busby -enlisted, ersatz type marked for 1ORR BAO. It is my understanding that the 1 East Rider Regiment wore pickelhaube and was a JzP regiment.

I saw that also .I don't know what to make of it .
I have never seen one before and I have seen no
reference for it .
Steve McFarland