It don't seem to be a lot of interest in shoulder straps on the site .
I know that it is a helmet site
but for every soldier who wore a helmet he also had shoulder straps
Here are some new straps that I just got in with the rank
of Officer Stellvertreter for FAR 51
My favorite rank
I collect these for regiments that I would not normally
go after
Steve 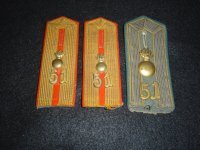 Staff member
I certainly have an interest. But you need to find straps to post them and this year for me that is exactly 0. But I very much enjoy other’s posting of straps, and I am very fond of this Wartime rank as well. Those are very nice.

So do I.
I especially like helmets worn by Offizierstellvertreter. They are common EM helmets, only to be (sometimes) made out by their particular Portepee Unteroffizier cockades (such cockades are mostly seen on helmets of wearers who were mobilized 1914 at this rank).
Offizierstellvertreter was not a rank, but an official function mostly assumed by Vizefeldwebel.
In some case and because of the lack of officers during the war, soldiers with the rank of Unteroffizier or Sergeant could also wear this function but they had to immediatly promote to the rank of Vizefeldwebel.

Something special to war time: when a Gefreiter, Unteroffizier or Sergeant promoted to Vizefeldwebel or Feldwebel during the war, the cockades were often not changed on the helmet, because they could not be seen under the Überzug. I own a few nominative helmets whose I could track the wearers and their wartime promotions in the bavarian and Württemberg Kriegsstammrollen. EM cockades worn by the ranks of Mannschaften, Gefreiter, Unteroffizier and Sergeant have not been necessarily removed when the guys promoted

Here is the helmet of Friedrich ZUBER who was Kriegsfreiwilliger on the 7.8.14. He was incorporated in the Königliches Bayerisches Pionier Regiment (unique bavarian pionier unit without number!) whose 2 bataillons were formed on the 1.8.14 through the dissolution of the KB Pionier Bataillon 4. (KB PB 1, 2 and 3 were left as is). On the 25.5.17, he was promoted to the rank of Leutnant der Reserve. We can presume he then wore a officer helmet, but as we can see, the EM helmet that he wore till the rank of Vizefeldwebel with function of a Offizierstellvertreter did not show the particular cockades for Unteroffiziere with Portepee. 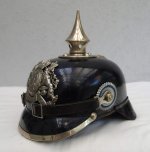 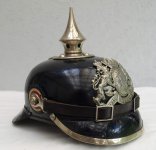 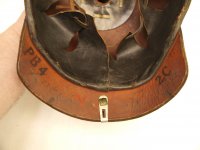 Here are the promotions of Friedrich Zuber: 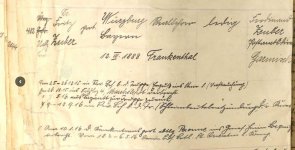 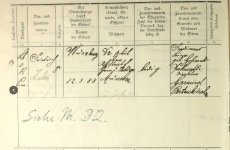 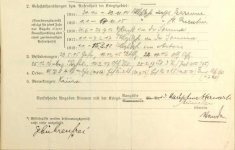 Staff member
I have approximately 24 of the Dunkelblau straps mostly cyphered and I always buy at least one new example every SOS so keep posting Steve!