Staff member
Steve sent me another series of photos, this time an M95 from FAR 66: 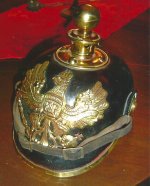 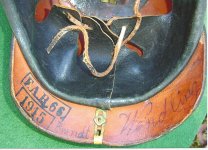 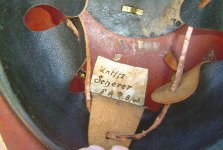 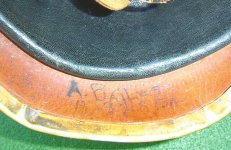 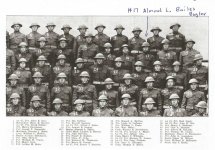 Number 17, the Doughboy who brought it back, Bugler Almond L. Bailes

The paper label indicates this was from a soldier in the 8th battery of the 40th FAR. They would have had a Prussian Adler.

Am I not seeing something correctly?

Hello John ;
If you will PM me with your email address I will relate the story to you .
I sent the info out to a few collector friends in an email . I hope that I still have it .
You are correct FAR 66 is a Baden FAR unit .I failed to relate that to Brian . The
rear visor as you see has Kammer issue stamps for FAR 66 and 1915 .The white label inside the helmet
reads 8 / 40 .My thoughts were the reverse of yours .I read it as Field AR 8 / Waffen number 40. My
1913 Rang List for F A R 8 shows officers assigned / serving in up to 6 Batteries . I am no expert
of unit strength but I don't think the F A R units had 8 Batteries ? I will ask my FAR collector friend
Rob Hickson that question .
The 328 in pencil on the front visor is the name and Artillery regiment of the U S soldier who
brought the helmet home after the war .All of this is what made the helmet so interesting to me .
I have collected helmets since 1970 .This is not a Bond helmet , but a bring back home by a US soldier .
I took the front plate off is has been on a long time .There are no impressions of a Baden plate having
ever been mounted on the helmet .The holes are metal grommets and the loops on the eagle have not been moved .
IMO the helmet is correct as is .How it came from a Baden Kammer to a Prussian unit , I can't say .
Steve McFarland

P S
there are 3 different German soldiers names in the helmet
and the name of the American solder who brought it back
so it seems that it was issued 3 times ?
Steve McFarland

Steve,
I would be very interested in hearing the story of this bring-back.
I didn't know that there was a number eight battery in a German Artillery Regiment until Glenn addressed the issue in this post:
https://www.pickelhaubes.com/bb/viewtopic.php?f=52&t=11146

I could be very wrong about this, but I think the German Army numbered their batteries independent of the Battalion.
In other words, if a Battalion had three batteries and the regiment had three battalions, battery number 8 would be the second battery of the third battalion.

We do the same thing --- sort of. I spent four years of my Marine Corps career with India 3/11. India Battery (Ooh-rah, Semper Fi) was the "last" battery of the Third Battalion, 11th Marines. My belief is that the German Army would have called "India 3/11" Battery number 9.

The current numbering of firing batteries in the USMC doesn't seem to fit the past pattern. 3/11 currently consists of India, Kilo, and Mike.