Philippe, great research and you will be right, I was not aware that it was a war time helmet. I have read 1913 and as you wrote the Landwehr came together for manover or so, that were my thoughts.

I have found another interesting information. According the military law the Garde-Landwehr were bataillons/regiments that were not used for the periodic recalls of the Landwehr but only in case of war.
Further by AKO from March 1,1872, every guard-regiment had to store uniforms and equipment for 2 Landwehr guard battalions in its garrisons. The uniforms and equipment for other Landwehr-Battalions were stored by the Landwehr-Districts, so that Landwehr-soldiers could be equipped quickly for reserve-services when needed.
Landwehr-Officers had to pay for their uniforms themselves as usual and store the equipment for cases of use at home.
So even if the Landwehr battalions were not at war, the uniforms had to be stored in depots.
(Source: google-books.de - Armee-Verordnungsblatt No. 6, 1872)

Sandy ;
Excellent information
I must re look at my helmet
and see if I overlooked any markings
Steve

Sandmann said:
the Garde-Landwehr were bataillons/regiments that were not used for the periodic recalls
Click to expand...

Sandy,
Some nuance is here needed.
Both Reservisten and Landwehrmänner had to do those periodic recalls. Those guys then used the equipment (that was stored by the Landwehr districts in case of mobilisation of the Landwehr units) during those recalls.
The Landwehr 1. Angebot had yearly two periodic recalls (3 + 1 weeks). The 2. Angebot had only one (together with the 1. Angebot).
Those Landwehr-Bataillons / regiments (same for the Reserve-regiment in peace time) did not formally exist till August 1914. Some deployed then, others, never. In peace time, they only existed on the paper to allow those periodic recalls with the equipment stored in case of war.
Here some interesting informations from a 1848 Landwehr manual: 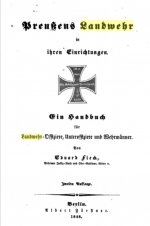 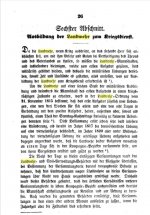 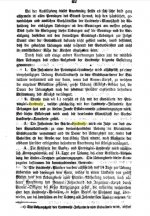 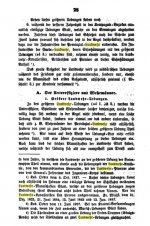 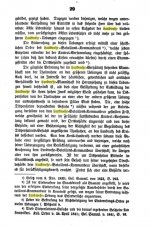 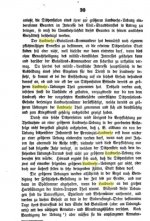 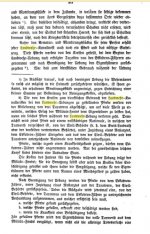 And here are some picts of one of my helmet that never has been worn in a active unit. It was stored since 1905 in the silesian Landwehr Bezirk Schrimm (2B of the LJR19 at the mobilization) only to be used for those periodic recalls between 1905 and August 1914. He was then worn in the II/LJR19 during the war on the eastern front: 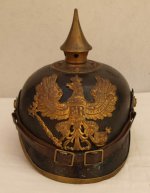 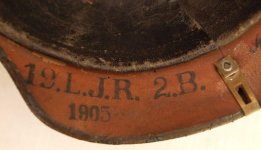 Nice helmet with excellent markings .
Interesting to me that the front plate does not carry the Landwehr cross
Thank you for the post
Steve

KAGGR#1 said:
t the front plate does not carry the Landwehr cross
Click to expand...

Steve,
That are indeed only very few helmets that proportionally have received a Landwehr / Reserve Cross.
It seems that a lot of collectors only accept such helmets as reserve or Landwehr helmets when they show this cross

Wrong, wrong, wrong!! And I know some collectors that have removed some 100% authentic wappen born on their helmets showing a RJR or LJR unit stamp, just because there was no Reserve or Landwehr cross on the Wappen

Philippe ;
I just saw a photo of a helmet for sale that carries the following Kammer issue stamps ;
I R 153 / 36 L I R .It has NO Sax -Duchie front plate but a standard Prussian line Infantry eagle
the kokard is green / white .I have placed an offer to buy it .But it is " Make an Offer "
No price quoted .
Steve

Great informations Philippe, I didn’t know that book and such helmets.
But I have also some nuances, because the number of calls for Reservists-, Landwehr 1- and Landwehr 2-Trainings changed in contrast to 1848.
The following pic is from the book „Die Militärgesetze des Deutschen Reichs mit Erläuterungen“ (Kriegsministerium, 1890) and about the trainings of Landwehr etc.: 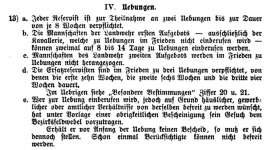 Here another good grafic about the times of reservists and Landwehr-service (translated by me but from „Wörterbuch des deutschen Verwaltungsrechts, Band 2“ - publ. 1893 - Page 918)

Thank you for this 1890 document, Sandy.
I knew that the Landwehr had to participate to periodic recalls in peace time (my 1905 LJR19 helmet is the best example). But you have nailed it perfectly now! Great ultimate nuances!
By the way, do you own this precious book (Die Militärgesetze des Deutschen Reichs mit Erläuterungen“ (Kriegsministerium, 1890)) or do you maybe have a link to it?

OK Sandy, I found myself the link:

But I cannot find the page of "IV. Uebungen"...Could you be so kind to tell it? Thank you!

The most books for my investigations are from google-books. But sometimes (mostly after 1900) they are not readable for free. In this case I try archive.org - It is a great library for old books, and you can find many which are not readable on google-books. Further the books can be downloaded as pdf and uploaded to the personal google-play-library afterwards.

My fault Philippe, you couldn’t find it because it was written in Band I., not Band II. Here is the correct Link. The schedule for Reserve/Landwehr-Trainings is on page II-132: