The shoulder strap is 5.5 cm wide, and used to have a tab to attach it to the uniform, but this was probably cut off when the strap was sown directly into the uniform. 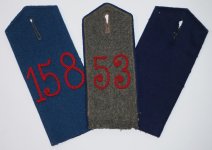 Why not just the fact that it is a later strap ( Feldgrau ) and maybe they just did not
have the proper shade of blue on hand at the time ? Or just no time for the attention paid to pre war straps ?
I consider myself along Mike Kelso ; Mike Ross ; Burke Fountain and Rob Hickson to be serious shoulder strap collectors .
Many exchanges between us , we have seen examples of shoulder straps that sometimes just don't go along with
the examples that are made "by the book " yet we know are correct .
Another question ; If it is not I R 53 ; then what else could it be ?
Steve McFarland
L

The fact that the strap used to have a tab indicates to me that is was made before tabs were abolished in Sept. 1915, and as Train used to have "hellblau" too until Sept. 1915 when they changed to kaliblau (which is much closer to dark blue), I can't really see it being Train.

The colour dark blue was amongst others associated with the medical services before WW 1, but I haven't been able to find a match.
Of course a lack of materials forcing the use of an incorrect colour is possible too, but as I date the strap from early in the war I was hoping there would be a more definite determination :wink:

Staff member
I have a few shoulder straps and boards myself. 778 at last count.

The reason is being suggested as being Train-Kolonne or Reserve Sanitäts Kompagnie is that if there was a RIR 53 it would not have been given the honour of a unique piping. The only authorized colour variations for shoulder straps were as follows:

Infantry Regiments with shoulder strap piping other than white due to seniority and Regimental distinctions:

As I date this shoulder strap as from before Sept. 1915 due to the original construction with a tab and the 5.5 cm width (but please correct me if I'm wrong), I expect the piping colour to reflect the Army Corps where the unit was raised, or the army branch it belonged to, as per the 1910 regulations. 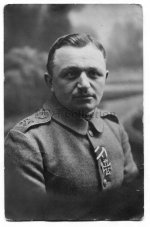 As I date this shoulder strap as from before Sept. 1915 due to the original construction with a tab and the 5.5 cm width (but please correct me if I'm wrong), I expect the piping colour to reflect the Army Corps where the unit was raised, or the army branch it belonged to, as per the 1910 regulations.

Actually Lars, I was wrong. I missed the fact that it was an M07 strap. Personally I do not put much faith in colour variations being definitive. Have a look at the blue Dunkelblau straps in this thread. According to regulation they should all be the same colour of blue, but they are every possible shade of blue. http://www.kaisersbunker.com/straps/Jan2016/4Infanterie_small.jpg
L

I see your point, quite some variance (and very nice collection =D> ). I've also seen that the hellblau of the infantry is typically a more intense shade of blue than the hellblau of e.g. Train. However I think that the piping on my shoulder strap doesn't look like a darker shade of hellblau, rather like a different colour, as per the side-by-side comparison with the dark blue backing of a peacetime shoulder strap.

I was hoping that with the concentrated shoulder strap knowledge level of the forum it would be possible to get a more definitive determination. There are so many options and changes during the war :-?

I recently bought a "hellblau" shoulder strap of IR 159, and the "hellblau" was significantly darker than my other "hellblau" straps.

Now I'm happy I didn't sell it or trade it away 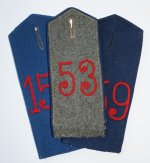