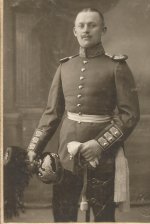 Very sharp uniform. I see a British influence in the cuffs on his dress blouse. Thanks for posting.
John

John ;
I could be wrong but I think the patterns ( cuffs and collars ) of the Grenadier uniforms
were patterned after the uniforms of the old uniforms during the time
of Frederick the Great
Thanks
Steve
G

another great portrait. Wilhelm Hornung was promoted to Oberleutnant on 27 January 1910 and left active military service on 18 October 1910 and transferred to the 1st levy of the Landwehr Infantry, initially in Sangerhausen and shortly thereafter I Berlin. He died on 17 March 1929 as a Major der Landwehr a.D. That being said I am assuming your photo was taken a couple of years or so before 1911.

Glenn ;
Once again great information . I think there must have been the date
1911 written on the back of the photo .Of course the photo would have
been taken before then when he was still in the regiment .
He would have given out the photo later
Steve
You must log in or register to reply here.
Share:
Facebook Twitter Reddit Pinterest Tumblr WhatsApp Email Share Link
Top