I hope that I am correct to I D this officer to K I R 145 .The writing on the back seems to indicate
that he is K I R 145 .He wears a black parade bush .However the front plate is still the regular
Prussian line eagle . So this photo has to be before the regiment change to the wide winged eagle .
Another question . I can not make out the cypher on his epaulettes .Also the field of the epaulettes
appear to a light color .K I R 145 epaulettes are blue .B & W photos do not always shown the true colors .
Maybe Glenn can come up with some of his great research to see who this officer might be ?
He wears an Adjutant sash .
Steve 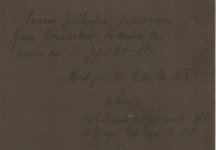 I read “von Brause“ and „Oberleutnant u. Regiments-Adjt“
If he is that guy he unfortunately didn’t survive the war. “Oberleutnant Eberhard von Brause“ died a few weeks after this photo gift, on September 1, 1914 in Dannevous (Schlacht um die Maasübergänge). He was born on February 22, 1885 in Potsdam.

Sandy ;
Thanks for the information
Steve
G

I very much concur with Sandy. He wears the Prussian Crown Order 4th Class which he was awarded while still a Leutnant on 1 May 1910.

He was killed as the brigade adjutant of 68. Infanterie-Brigade by a shrapnel wound to the head. He survived his elder brother, (Hauptmann) Hans Otto, a company commander in RIR 10 (peacetime Grenadier-Regiment Nr. 11) by just over a week.

Glenn ;
Once again such great information .Each one of your posts adds so much to each topic .
It brings to life for a short moment the subject .I will record all that you and Sandy have
added and I will place that information with my photo .
Steve

Officers helmet of K I R 145 after the front plate change . As I understand the regulations
call for a Garde Eagle without the Garde star. Which means to me , not a Grenadier eagle 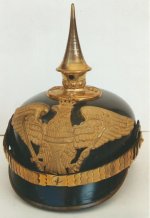 but I have seen correct K I R 145 enlisted helmets with wide winged Grenadier front plates .
I have a photo of the Kaiser with the officers of K I R 145 .Some officers wear the new eagle
front plate on their helmets ;other officers do not yet the new front plate .
Steve
P S
I can see the ghost of the old front plate still on the helmet . 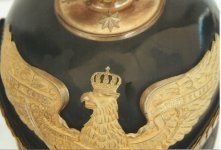