Staff member
I decided to post some comparison photos of three different original OR's leather straps. Hopefully, this will be of some use to the membership:

From top to bottom...M15 Tshako strap, Brass M91 strap and finally the uber rare Neusilber M91. The silver strap comes directly off of a Bavarian OR helme with neusilber fittings. 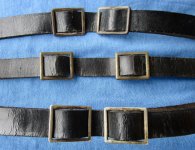 Take note of the fine rounded edges of all three sets of buckles. 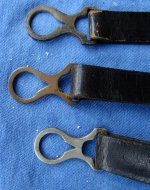 A comparison photos of the M91 end fittings. I would also mention that all M91 posts are not the same size, you could spend $300 on an original strap and it will not fit over your posts! 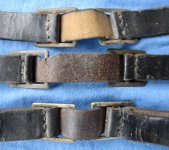 Note here that the M15 tschako strap at the top has no sweat staining from use even though it is an original strap. The other two straps do have staining from use and show how this darkens the leather. We also have some good examples here showing how the original straps were stitched. There are original straps that are simply riveted together and one wonders why the manufacturers simply didn't adopt this as being a quicker way to make a strap. I look forward to your comments.
L

Thanks Brian,
Much appreciated! It has become so hard with old (or "aged") repro chinstraps showing up, making it more difficult to determine if original or not. Having three confirmed originals of the different types is a great reference.
Regards,
Lars

Staff member
One other thing of note....if you look at the first photo posted of all three straps, you can see the natural curve in the leather which has taken place from being on a helmet for 100+ years. The M15 is actually upside down relative to its actual position on the tschako. The M95 brass in the middle hung from a hook in my collection shelf for 10+ years because it it did not fit any of my helmets....so it is straighter than the other two. The neusilber is right side up but would not lay flat because it formed around the helmet over a century. Tomorrow we look at an M15 Garde tschako strap.

This is a great micro comparison of a larger subject, indeed.

Thanks for posting these Brian. A fun subject!

I thought a lot about what you had posted last week, concerning the higher quality and thicker metal parts on these straps being made for more elite Regiments within the German Army during the pre-war years. It got me pondering for a few days, thinking about examples I have looked at in the past, and going through my straps here at home.

Sometimes, I think too much..., must be my OCD that most career military men seem to have.

I think that some of the opinions I am about to express are probably common knowledge written in books dealing with the German Army's struggle with Standardization and Logistics. I have not read those books, but I am always happy to learn and hope other members of the site will direct me toward them!

It made me think about the plethora of different manufacturers between different German States, and the increases in the numbers forced onto those manufacturing entities during the first year of the war.

I am of the opinion that these makers in different Germanic States, followed the directives for standardization, but due to the differences in hand-manufacturing and levels and methods of production, the standardization of things as simple as M91 sideposts ended up having slightly different diameters within a few hundredths or thousandths of an inch, depending on the maker, especially between different States.

The end fittings made to fit a specific company's M91 posts would logically be too loose or too tight on a different maker's post if this logic is followed.

I base this opinion on the tiny visual differences in the posts themselves made within different German States.

While all of the M91 posts generally look similar within the Directives set down in writing from above, the posts from different maker's do look slightly different on different manufacturers helmets, especially if they are from different States.

Within German industry, these helmets had always been basically hand made, with true standardization being within one individual company only. Think of the nightmare of different pitches and sizing used in hand-drawn screws used by pickelhaube makers. Its a mess...

I believe that higher Reich-Level Inspections were not prioritized with CERTAIN pieces of kit and equipment in the pre-war era, but other pieces of kit, such as standardization of tooling and manufacturing would absolutely be a major priority for things like firearms, or projected or fired ordnance, or radio communications equipment.

1914 is a neat period for collectors like us who love ersatz helmets and all of the variations and materials you find them in.

But for the Germans it must have been a massive logistical nightmare. I bet there were a lot of Senior Logistics Officers who deeply regretted Germanys outdated use of the fuedal-style traditions of equipping different State's troops for things like pickelhauben.

I believe the M1915 helmets standardized a lot for the Germans as far as helmets go. I think they must have tightened their inspection procedures up somewhat and got the dimensions for parts working better. But I still find M91 posts that are slightly larger in diameter than the female connector strap end that I want to snap over it.

As for riveted chinstraps, every 100% original "kit-type helmet" that I have seen that has never been messed with has this type of strap.

I think that is why they are rare, and being riveted makes sense. If you think about it, there is no stitching involved at all in the "kit-type" helmets.

The maker's of the tin "kit-type" pickelhauben used a roll crimp to affix the liner onto the helmet. This makes sense, because these maker's worked in metal, not stitching like a traditional pickelhaube maker.

If they roll crimp in the liner, then why not rivet the buckles onto the straps?

And why not rivet a male and female snap into the back of the liner?

After all, it is faster and was likely approved by the contract, and a cost reduction if they are made and riveted in-house vice purchasing them elsewhere or hiring out a vendor to final stitch the straps together.

So, why bother with using stitching at all?

My opinion and 2 cents.

I made this observation on silver straps.
Some original buckles are a lot thinner than the steel or brass buckles.
If you look closely your silver buckles are a little thinner.

Staff member
Great comments from everyone, thank you. I agree with your analysis Bryan, the massive expansion of the German army after 1914 demanded more standardization and the development of "production line" manufacture. Consequently, we see the tin kit helmets which just snap together...they still have the look but minimal stitching and only to the liner. Lets take a look at an M15 Garde Tschako with original strap that belongs to Amy: 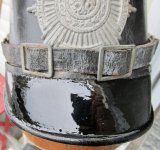 Thicker chunky buckles here but still with the two parallel lines imprinted into the leather. I am refinishing the front visor which is why I have the hat.

Substantial M91 fittings as well. Note: This strap shows signs of drying out as we see missing finish and that red rust colour beneath. The Reich kokarde is a primo example of what an original looks like. I did not try to remove this strap during the refinish process, I had no desire to move it and put stress on the leather. Here is another photo comparison of the thickness of M15 vs the pre war neusilber strap shown originally: 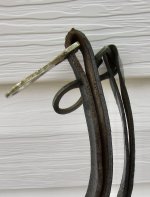 To my eye, the M15 strap is about half as thick as the pre war one.

You are right about the strap thickness on the earlier pre-war helmets, but I have seen a few thin pre-war and thick M1915.

I think you are generally correct though, but there are exceptions.

Attached is a photo of a very thick M1915 chinstrap I just took off of a helmet. It is as thick as a pre war, but it used a wartime tanning process that is making it slowly get more fragile as it ages.

I think the quality of the pre-war leather was much higher than the wartime stuff they were getting once things kicked off. Also the tanning process used pre war and wartime was different in some cases.

I have been told by older collectors who were familiar with leather tanning processes that the reason that that some of my M1915 helmets had the "red rot" and were slowly turning into dust on their liners and other parts was because they had been vegetable tanned rather than using the earlier, slower tanning processes of the pre war helmets using higher quality leather.

I believe they told me that the white colored pads you see in a lot of M18 stalhelms were mercury tanned, and are solid and as good as the day they were made, usually, so I guess there were a bunch of tanning processes available to them during that period.

I had the opportunity on another forum to write a post on the M91 and M95 chinstraps.
Excavations (Verdun) show a thickness of M91 brass fittings of 1.5 mm in particular on the M14 felts, 3 mm in particular on certain Leib-regiment or mounted troop helmets. (same for scaled chinstraps). Obviously the journals are adapted, with offset lugs or not.

Concerning the M91-95 and M15 chinstrap reproductions, the loop axis is not offset, and the seams are not compliant. The first 2 photos show perfect seams, "manufacturer's tailoring". The 3rd shows an authentic loop but a replaced chinstrap, the stitching is "artisanal". Small leather goods and shoemaking workshops repaired the rear of the front with all their might.
The last 3 shots are fakes.

The fakes are of various conformities, some are formidable after aging. You have to focus on all the details: leather, stitching, trunnion key, loop...

Thanks! I may end up sending you a pm down the road if I have any questions, because you seem to have been doing your homework.