A new article on an obscure and wonderful find.

Interesting, but I'm not entirely convinced. The helmet in question should have the double stepped visor as found on Kurassier and JzP officer's helmets, and as illustrated in the painting in the article. I believe the nickelled helmet in the photo of the One Year Volunteer also has the double stepped visor. I would love to be proven wrong, but show me a photo or regulation that allows for an EM JzP style visor on an otherwise officer's helmet...

I would love to be proven wrong, but show me a photo or regulation that allows for an EM JzP style visor on an otherwise officer's helmet...
Click to expand...

I'm a little bit confused. If I'm following you correctly you see a disconnect between Randy's visor and other pictures of the nickeled helmets. I do not think you will ever find a regulation on this. Perhaps one of the “service life as a Meldereiter" type books if you can find one. But as I have all these pictures floating around my head I'm trying to understand precisely what I am looking for a picture wise. Can you clarify? I wish the Brackmann book wasn't so heavy and awkward!

Here in Brussels, in the fabulous Royal Army Museum, we have a similar helmet, I think with the double stepped visor and yellow mountings. I'll post a picture as soon as I can.

As mentioned before, the Royal Army Museum in Brussels has the same helmet. Notice the stepped visor (not double!). The Prussian Kokarde is missing, but there are clear markings there was one originally.

And here is the EM Garde Meldereiter.

Thank you for posting these pics! I wish we were able to see the rear neck guard, as I suspect that this has the one-piece style and is in fact a helmet of the Stabsordonnanzen Garde-Korps. There are some great pics of this type of rare helmet on pgs. 457-58 of Tom Stubbs' helmet book...

Thank you very much Johan! That one is a little bit more easily explainable because of the gold fittings. Is there some sort of literature or written explanation offered by the Museum?? It might be all wrong or it might be part right! Thanks again.

I love the pictures in his book but his write up confuses me. He uses the title Stabsordonnanzen Garde-Korps. It is not clear to me who exactly he is talking about. On page 455 he clearly explains that there are no officers in the staff orderlies and then when you turn the page suddenly were talking about officers. I think there is a better writeup in the book by Herr and Nguyen where on page 590–591 of the English language version they talk about these dispatch riders. However, there is a real lack of photographic evidence. I think the best that I have seen so far is Brackmann. I do love the pictures in Stubbs and Randy's helmet definitely does not have a one-piece lobster tail. However, his has a spike similar to the one in Belgium. His spike base is similar to the one in Stubbs. Both of those 2 helmets have yellow fittings. Randy's does not.

So based on what you have seen what is Randy's helmet? I still do not understand what you are talking about reference the visors. I wish there were more photographs but it is possible that those of 1885 to 1887 are always misapplied if indeed they were wearing the uniform of their home Regiment. It is a really obscure niche here.

There is a picture in the old Almark book on pg. 86. This was not only discovered by Glenn Jewison but he also determined easily that he was misidentified. There is also this quote on page 87. "There is evidence that officers at least were allowed to purchase an extra polished steel helmet, probably of lighter weight, for off-duty wear".

A great read there Joe... and nice photos Johan.

So where does this one fit in? 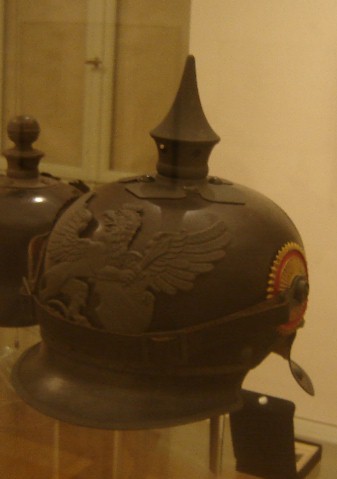 When I posted this photo before Robert suggested it could be Stabsordonnanz and JR92 mentioned the magic word Meldereiter...

XIV. Armeekorps did not have a Meldereiterdetachement and when the Detachment Jäger zu Pferde des XIV. Armeekorps was formed it wore a Prussian uniform.

Stubbs pg 456 Says “NCOs and men of… Baden... wore a Prussian JzP mans helmet with the respective state ordinance in yellow metal. No pictures and is in a paragraph called Stabsordonnanz.

Ok guys, I have another question for you. A while back I obtained a 'well worn' shell which I assumed to be JzP helm - no cockades, strap or wappen. The guy I got it from maintained it had been 'liberated' by his uncle who was fighting the Germans in South West Africa (now Namibia) and used as a plant holder from the 20s onwards!! Does anyone know if this is a possibility?
G

This from the 1903 Dress Regulations concerning Stabsordannanz:

Hey guys. This is a very unusual helmet. It came out of an old estate sale in Hot Springs, Arkansas. The antiques dealer had no idea what it was when he offered it. The helmet is quite salty and I feel that it has never been touched. Karsten Ritscher had a helmet like this many years ago with a photo of the wearer circa 1900. He claimed it was Guard Jaeger zu Pferde. I have collected 50 years and have never seen one like it. It shows that the more you know, the more you know that you don't know. Contact me with your email address and I can send you more photos on request.
M

I have a helmet virtually the same as this, in rather better condition but the plate centre is not enameled. If I can work out how to post pics I will post some.

If not you can always e-mail them and we can post them. It is getting easier all the time to find host servers. However, I think many of us would be interested in seeing pictures of your helmet.

Glenn and Joe, thank you for identifying that helmet with the Baden Wappen as Stabsordonnanz and thanks Glenn for the reference to back it up.


garlanj said:
A while back I obtained a 'well worn' shell which I assumed to be JzP helm - no cockades, strap or wappen. The guy I got it from maintained it had been 'liberated' by his uncle who was fighting the Germans in South West Africa (now Namibia) and used as a plant holder from the 20s onwards!! Does anyone know if this is a possibility?
Click to expand...

Helmets like this were not issued to the Schutztruppe in South West Africa. However I have seen the occasional photo of a regular army cavalry officer in uniform in the colonies, I recall one a while back showing an Ulan officer in DSWA. So, I think your item might have belonged to an individual officer, maybe one who served in the JzP before joining the Schutztruppe and going to Africa, perhaps he took his helmet along as a souvenir of his previous service?

Hope that helps a little,

This helmet of Rittmeister Thumb von Neuburg was saled by Kube in spring 2005.

Thank you for posting this! All of his pictures have the black helmet–assuming that the description is correct this would have been his “extra element”. The yellow furniture makes more sense. So what do we do with the all silver one?!
You must log in or register to reply here.
Share:
Facebook Twitter Reddit Pinterest Tumblr WhatsApp Email Share Link
Top