Conical hats such as this one were worn by the Imperial Chinese Army under the Qing Dynasty as well as by the insurgent "Boxers" during the Boxer Rebellion. This particular style of conical hat could accurately be called a “helmet” as it is produced in a way that would provide some protection from blows the head. It is constructed via a weave pattern that provides strength and rigidity – unlike other conical hats that merely provide protection from the sun and weather. This style of hat was used by Imperial Chinese Army forces in the Taiping Rebellion, the First Sino-Japanese War and the Boxer Rebellion.

This one is rather special in that it is to a "seventh level" official including a court official or military officer. It is complete with its original storage/transport box. 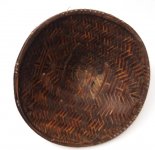 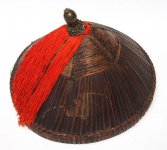 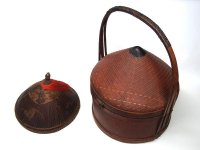 Nice find Peter, you get some interesting stuff!